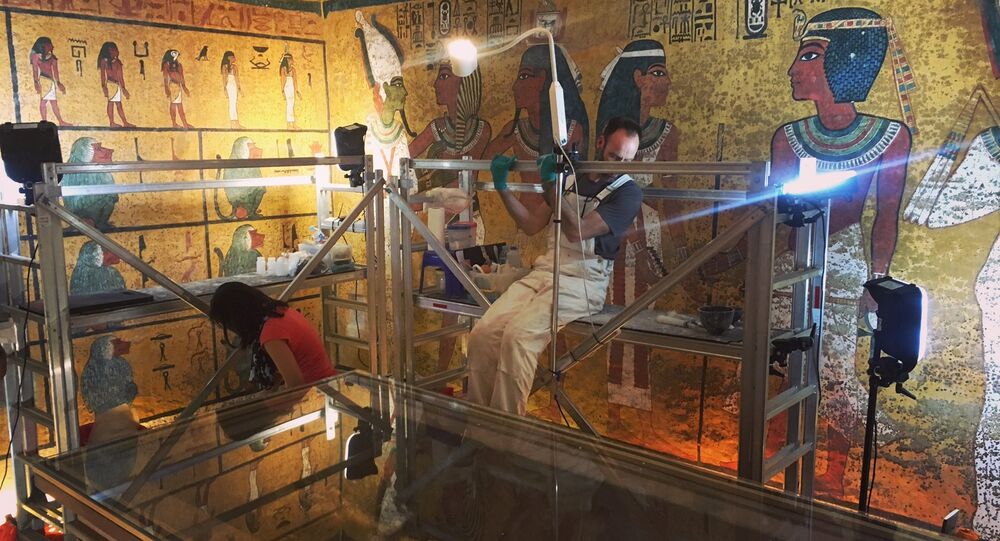 An intact tomb dating back to the Twelfth Dynasty, which ruled Egypt nearly four millennia ago, has been discovered.

The identity of the deceased is Shemai, son of Satehotep and Khema. The tomb was discovered by researchers with the University of Jaen in Spain, and is located at a site called Qubbet el-Hawa, a dune on the bank of the Nile which houses the tombs of numerous Ancient Egyptian officials.

The inside of the tomb contained funerary goods such as pottery, cedar coffins, and, of course, what is believed to be the mummified corpse of Shemai. Serrano said that the mummy is adorned with a "beautiful" funerary mask and is presently under study.

"We have found the mummy-body of Shemai, but we left him in his original position, in his coffin. The next year, we will have the opportunity to look [at] his face," said Alejandro Jiménez-Serrano, with the University of Jaen, to Live Science.

The tombs in the necropolis often have "autobiographies" of the interred carved into their facades, revealing to archaeologists the lives of these long-dead men. Jiménez-Serrano says his team hopes to learn more about Shemai's life based on these engravings.

Shemai was part of the nomarchy of Elephantine, an island in the Nile. The "nomarch" was an office in Ancient Egypt similar to a governorship, but hereditary. While Shemai himself did not serve as nomarch, his father Khema and older brother Sarenput II both did.

Sarenput II was one of the most powerful men in Egypt under the reigns of the pharaohs Senwosret II and Senwosret III, according to Jiménez-Serrano. Sarenput was a general and leader of several religious cults, on top of his duties as a nomarch.

Another tomb unearthed was that of "Lady Sattjeni," Sarenput II's daughter, who served as nomarch herself after the male line of the family died out.

The University of Jaen mission in Qubbet El-Hawa has uncovered the tombs of 14 members of Elephantine's ruling family during the 12th Dynasty, Serrano added. This wealth of information has presented an excellent opportunity to learn more about the lives of the upper class in Egypt during this time period.

Other discoveries from Qubbet El-Hawa include a rock carving of men hunting an African ostrich.