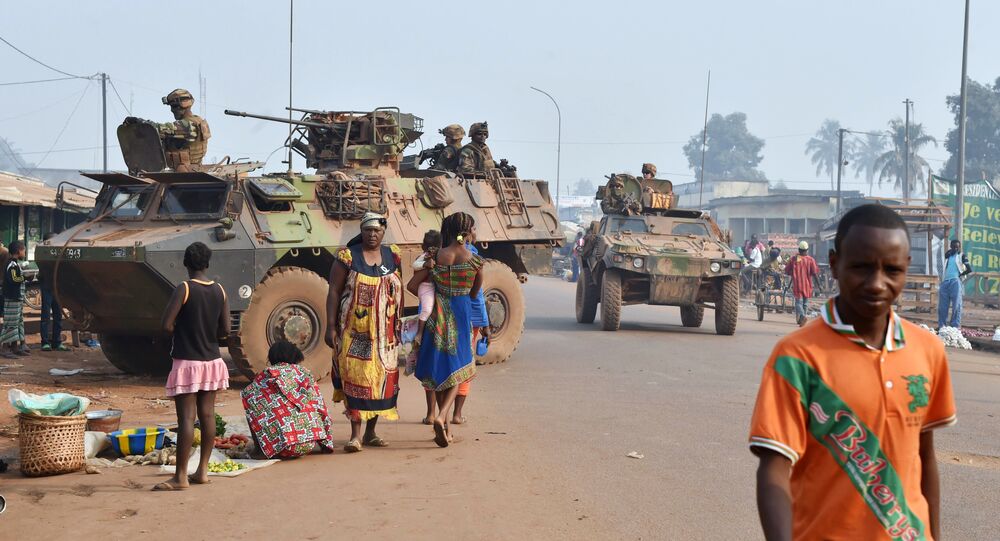 French Pullout From the CAR: 'No Grounds to Regret' French Troops' Departure

On Monday, Paris officially ended Operation Sangaris, a French military mission in the Central African Republic intended to bring stability to the violence-torn country. Speaking to Sputnik, French security and Africa expert Rolland Marchal explained why there is no need to regret the French departure.

Arriving at the French military base in the Central African Republic capital of Bangui on Monday, French Defense Minister Jean-Yves Le Drian announced the end of France's military mission. "The page of the operation has been turned," Le Drian said, speaking at a ceremony at the M'poko military base, presided by local officials and foreign diplomats. "Sangaris has accomplished its mission."

© AP Photo
France Officially Ends Military Operation in Central African Republic – Defense Minister
The defense minister stressed that the end of the French operation does not mean that Paris intends to abandon the CAR. "France will keep its commitment to the CAR…There is no question of abandoning this country." Some 350 French troops are expected to remain in the country as a tactical reserve for UN peacekeepers.

France sent over a thousand troops to its former colony in late 2013 in an effort to quell an uprising by mostly Muslim rebels who had seized the capital of the majority-Christian country and overthrown its president. Operation Sangaris enjoyed the official sanction of the UN, which sent its own peacekeeping force a year later. Le Monde has calculated that the mission, originally intended to last "four to sixth months," cost France's treasury over 500 million euros.

Thousands have been killed in violence that ensued since the 2013 unrest, with about 20% of the country's population forced to flee their homes. Two successive interim governments, along with thousands of UN peacekeepers, have struggled to stop the fighting and to disarm warring militias. Meanwhile, French involvement was subjected to controversy after French troops were repeatedly accused of sexually abusing woman and minors.

On the eve of Le Drian's arrival to the CAR, clashes broke out in Bangui's Muslim quarter, killing 25, according to the UN information office.

Asked to comment on the mission, and why Paris has been unable to quell the unrest after nearly three years, Rolland Marchal, French National Center for Scientific Research analyst and expert on conflicts in sub-Saharan Africa, told Sputnik France that there was little Paris could do on its own to resolve the messy and complicated crisis facing the country.

© AFP 2021 / Giuseppe Cacace
MSF Warns CAR in Greater Need for Humanitarian Aid Than Ever
"I think that there are arguments that need to be considered from two sides," Marchal explained. "In a sense, it wouldn't be correct only to blame France for the situation in which its former colonies have found themselves. And military interventions in the affairs of foreign states cannot last long; otherwise it is called an occupation."

The expert admitted that Defense Minister Le Drian wasn't being completely honest when he claimed that Operation Sangaris had achieved its goals. In fact, he said, neither France's mission, nor the mandates of the African Union and the UN, have been fulfilled. According to Marchal, this is a common outcome for operations undertaken by the international organizations.

"The only thing that France managed to organize and force through was elections, thanks to which there is a government which is a little more legitimate than its interim predecessor. But this government actually has very little control over the country. So really, the results are very mixed, and it is true that there is room for concern."

At the same time, Marchal stressed that there is no need to regret the departure of French forces. Instead, Paris might now put pressure on the UN mission to improve the quality of its own contingent of troops, "because the ultimate responsibility for peace rests on the shoulders of the UN and the African Union much more than it does on France's shoulders."

© AFP 2021 / ISSOUF SANOGO
Dozens Killed in Violence in Central African Republic
As for the groups of militants whose fighting has destabilized the country, including Seleka and Anti-Balaka (the former mostly Muslim and the latter mostly Christian), the expert suggested that the problem is that neither of them has a real hierarchy, or a single leader who could unify either of them.

"These groups should be seen more as a collection of small groupings, between which very opportunistic alliances are created. One day they may appear united, and the next they will be extremely divided. Violence between the groups is often not part of any broader strategy, but consists of local incidents which end up having implications on the national level…" All this has been complicated by the weakness of the national government, by the UN's impotence, and by a French mission that has been looking for an exit strategy for a long time prior to Monday's announcement, Marchal concluded.

French Troops to Remain in CAR Despite Conclusion of Sangaris Mission