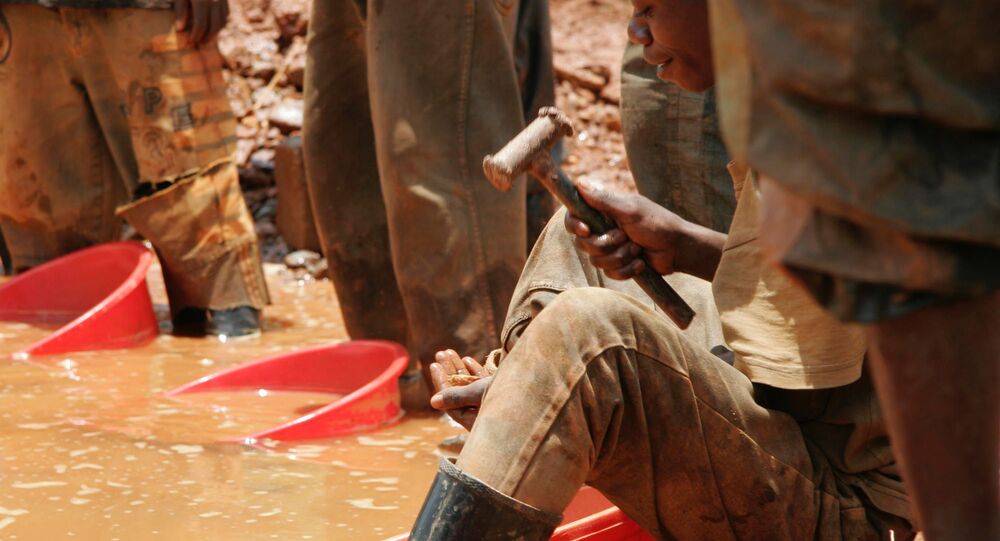 Artisanal metal mining in the Democratic Republic of Congo is dominated by armed groups which levy taxes on workers and smuggle metal out of the country for sale on the international market, researcher Lotte Hoex told Radio Sputnik.

Artisanal metal mining in the Democratic Republic of Congo (DRC) is mostly under the control of armed groups, and many large multinational companies know little about the origin of the metal they buy, Lotte Hoex, researcher in conflict mapping at the International Peace Information Service, told Radio Sputnik.

In contrast to industrial mining, in which the metal goes directly to corporations working in the Congo, artisanal mining is carried out by miners working independently.

During the course of its research, the International Peace Information Service visited about 2,000 artisanal mining sites in the DRC. They found that minerals such as gold are sold to local traders, who then take the minerals over the borders, mainly to Rwanda, and in Rwanda sell them to the international market.

"They go to smelters, smelters smelt these minerals and then sell to the big companies. Big corporations often don't know where their minerals are coming from, because they buy it from the smelters," Hoex explained.

"However, there is increased information and legislation that give companies the responsibility to research where their minerals are coming from, and to make sufficient efforts to research the circumstances at the mining site."

The research team reported on armed groups which control the mining sites, who are often serving in the national army.

"The type of control that they have on the mining sites is mainly levying illegal taxes. So, they ask the miners to pay part of their income to them. Sometimes this is part of the mineral itself, a piece of gold, but in other cases this is really some money, either to the army or the rebel groups," Heex said.

"We have seen in areas where the rebel groups have less daily control over the mining sites, the most (common) type of control that we see is pillaging. So, they come to the mining site once a week, once a month, and they pillage the minerals, the money, etc."

© Photo : Pixabay
Fuel for Future: India to Develop Coal Fields and Mines in Russia
The DRC's mining industry is mainly comprised of three sectors: tin, coltan, and wolframite, which have had varying success in certifying their mines.

"However, gold is very different. About 98 percent of gold is being smuggled out of the DRC, and companies have failed to contribute to the sector. One reason for that, is because it's very easy to smuggle (gold). Tin is way heavier, it's not worth that much, whereas gold is very small, it's worth a lot, so it's very easy to smuggle," Hoex explained.

"We have seen that actually, over the years this sector is getting worse and worse, so more armed groups are present at the mining sites. It's not regulated at all, actually."

The research institute's latest report found that about 50 percent of metal mines in the DRC are certified to source from, which helps companies to understand the best place to buy their minerals from Hoex said.

© AFP 2020 / Junior D. Kannah
Beyond 'War, Poverty, Hunger & Drums': Spanish Reporter Tells Sputnik About Life in Africa
As well as more information for companies, more regulation from the DRC and international governments and control over armed forces would also help to stop these illegal practices.

"What would be very important, is that the army controls its men. We have seen that at about 70 percent of the mining sites where an armed group is present, the army is present, and these are undisciplined elements of the army. Here is a big role for the government itself but also the international community, to help the army to control its men, to know where they are and what they're doing."