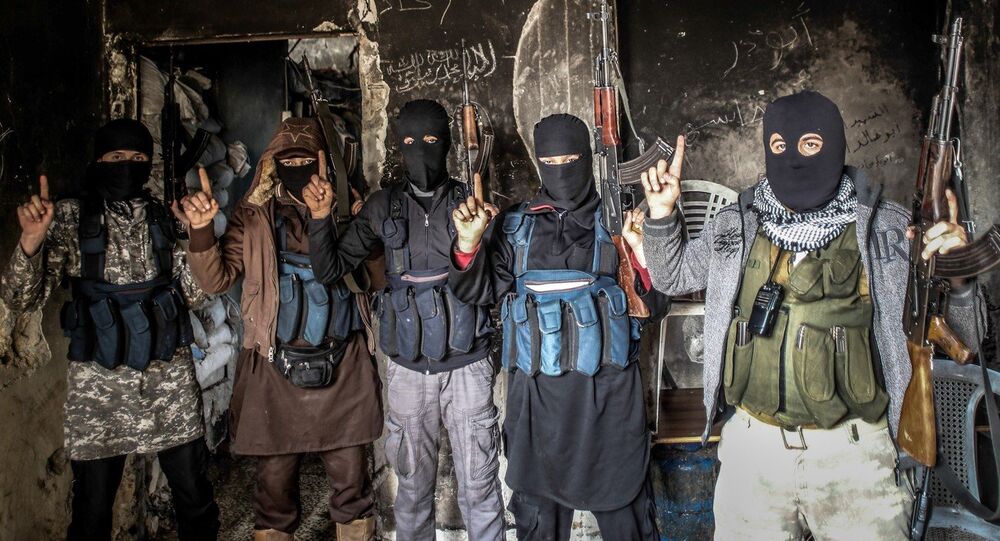 Five years after Libya’s longtime leader Muammar Gaddafi was cold-bloodedly murdered right in front of mobile phone cameras and with the full backing of the Western nations participating in the 2011 military campaign against Libya, Sputnik talked to Abdel Baset bin Hamel, a journalist who was close to the late Libyan leader.

© Sputnik / Vladimir Fedorenko
Martyr of Arab Spring: Gaddafi's Murder Turned Libya Into a Living Hell
“The reforms in education, health care and infrastructure Muammar Gaddafi carried out in Libya for 43 years will forever remain part of this country’s history. The current crisis results from the fact that the changes, which have been taking place here [since 2011], are implemented by foreigners and with international support. All this has been the work of the great powers pursuing their own goals,” Abdel Baset bin Hamel said.

He added that in 2011 everyone was talking about protecting the people’s rights and that a pertinent resolution adopted by the UN Security Council allowed 43 countries to use military force to topple Gaddafi and his government.

“That the large-scale military operation against Libya was not meant to solve the crisis is fully evident now that people in Sirte and Benghazi are being slaughtered like cattle and billions of dollars have been stolen from the Libyan people,” Abdel Baset bin Hamel said.

He added that the 2011 Western military operation was meant to get rid of Gaddafi, not to solve the country’s problems.

“Gaddafi was the only one who pitched the idea of a united Africa and a single African army. Back in those days, Libya was the most independent country in the region, but the big powers, led by the US, got a pretext for 'protecting civilians and spreading democracy' in Libya. They used the young Libyans’ legitimate demands for better living conditions and new jobs to stoke up the conflict and Hillary Clinton was actively involved in the Western effort to topple Gaddafi,” Abdel Baset bin Hamel  noted.

“It was not a revolution we had in Libya, it was a national catastrophe that has turned Libya into a failed state,” he added.

Abdel Baset bin Hamel said that Muammar Gaddafi had managed to avoid the problems Libya is facing today because he was perfectly aware of his country’s specifics and the nature of relations existing between its various tribes.

“We had no conflicts within our society and tribes and between our political factions. Gaddafi always managed to find a compromise to keep the nation together under one flag. He was a born leader and this is how people viewed him, rather than a top-level official. A real phenomenon, that’s what he was,” Abdel Baset bin Hamel said in conclusion.

Gaddafi’s murder and the crisis in Mali

© REUTERS / Adama Diarra
Mali Introduces 3-Month State of Emergency Amid Islamist Violence
Meanwhile, the same state of chaos Libya has been living through since Gaddafi’s murder is now evident also in Mali where French troops are currently deployed as part of Operation Barkhane, which Prime Minister Manuel Valls has promised will continue as long as it takes to eliminate the “Jihadist threat.”

In January 2013, less than a month after his election, French President Francois Hollande launched Operation Serval to halt the southwards advance of Islamist insurgents in Mali.

French media were quick to notice a direct link between Gaddafi’s fall in Libya and an increased flow of arms to jihadist militants in Mali. Many experts believed that the arms had come from the armories of the fallen Libyan leader.

In an interview with Sputnik France, retired Brigadier General Dominique Trinquant said that there were more reasons for the current chaos in northern Mali than just arms supplies.

”I think it would be an exaggeration to say that all these Kalashnikov assault rifles and machineguns have come from Gaddafi’s reserves. What is really happening is that the mercenaries, who once served Gaddafi, have been moving over to Mali from southern Libya. Small wonder that the jihadists were so quick to move in and fill the void,” Dominique Trinquant said.

© REUTERS / Abdalrhman Ismail
Syrian Conflict is 'Result of Western Powerlessness, Inability to Understand the Crisis'
When asked who was now sowing death and destruction and cementing their positions in Syria, while France fought jihadist militants in Mali and elsewhere in the Sahel and Sahara regions,  Dominique Trinquant said that Syria was a completely different matter.

“The strategy is changing. France’s virtual absence from what is going on in Syria has slowed the pace of the antiterrorist operation there. We do conduct airstrikes in Syria, but the closure of our embassy in Damascus has seriously hampered our intelligence gathering capability and this has caused a lot of criticism here in France,” he added.