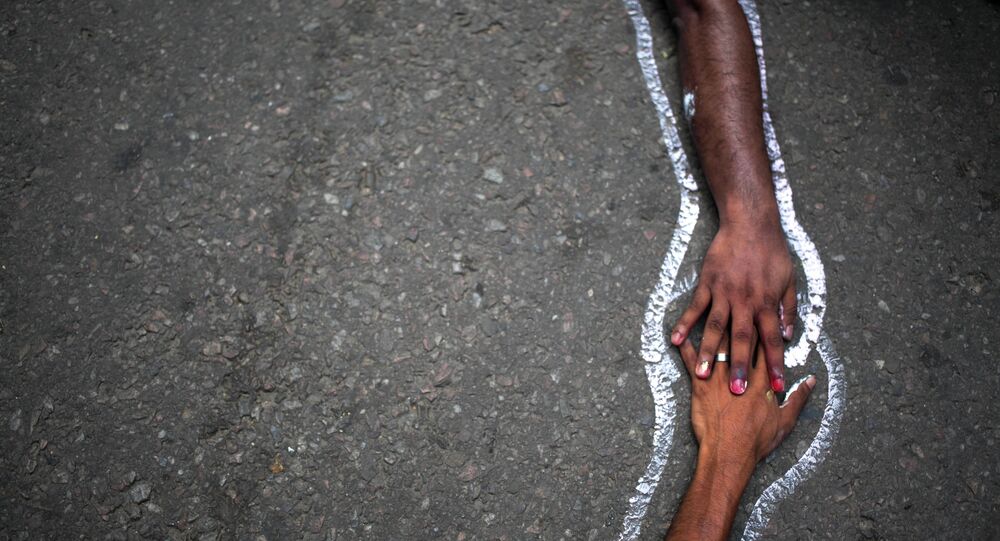 A special Nigerian police force designed to fight against violent crime has been accused of "systematically torturing detainees" and demanding bribes from victims, raising further questions over British support and training of Nigerian military and police forces.

Following an investigation by Amnesty International (AI), which included reports from lawyers, journalists and other testimonies, the organization said that a number of detainees of Nigeria's Special Anti-Robbery Squad (SARS) "had been subjected to horrific torture methods, including hanging, starvation, beatings, shootings and mock executions."

"A police unit created to protect the people has instead become a danger to society, torturing its victims with complete impunity while fomenting a toxic climate of fear and corruption," Amnesty International's Nigeria researcher Damian Ugwu said.

Today Amnesty International Launches its report on torture by Nigeria's SARS — 'You Have Signed Your Death Warrant' https://t.co/qDTAIC2WJS

​"Our research has uncovered a pattern of ruthless human rights violations where victims are arrested and tortured until they either make a 'confession' or pay officers a bribe to be released.

"SARS officers are getting rich through their brutality. In Nigeria, it seems that torture is a lucrative business."

'My Body Ceased to Function'

The report also stated that many detainees had been held in horrific conditions, including one detention center known as the "abattoir," where Amnesty allegedly found 130 people living in overcrowded cells.

Evidence collected as part of the investigation found that the police team was torturing and extracting confessions from people without evidence.

Police in Nigeria use torture to extract bribes and confessions, Amnesty says https://t.co/AsQWxIvHAF via @markets

​In one case, a 25-year-old fuel attendant in the state of Anambra was arrested and tortured after his employer accused him of burglary at the premises.

"The policemen asked me to sign a plain sheet. When I signed it, they told me I have signed my death warrant," the man told Amnesty.

​"They left me hanging on a suspended iron rod. My body ceased to function. I lost consciousness. When I was about to die they took me down and poured water on me to revive me."

While Amnesty's report allegedly contains testimonies from senior officers admitting that torture had taken place, police officials in Nigeria have rejected the claims and denied the allegations of torture and bribery.

© Flickr / Loz Pycock
UK to Provide Nigeria With Up to $60Mln Over 4 Years to Tackle Boko Haram - Foreign Office
The report has also raised questions over the UK's connection to Nigerian police forces, with the British government announcing in February that it was assisting the Nigerian police force with various training and anti-kidnap strategies as the country continues its fight against Islamist group Boko Haram.

While British officials have stressed that they have sought assurances from Nigerian officials about upholding human rights concerns, Amnesty has called for greater action from UK authorities.

"Given these fresh concerns on the police's human rights record, Amnesty will urge the UK Government to demonstrate how it is ensuring that UK police and military training doesn't contribute or facilitate any of these types of abuses," AI said.