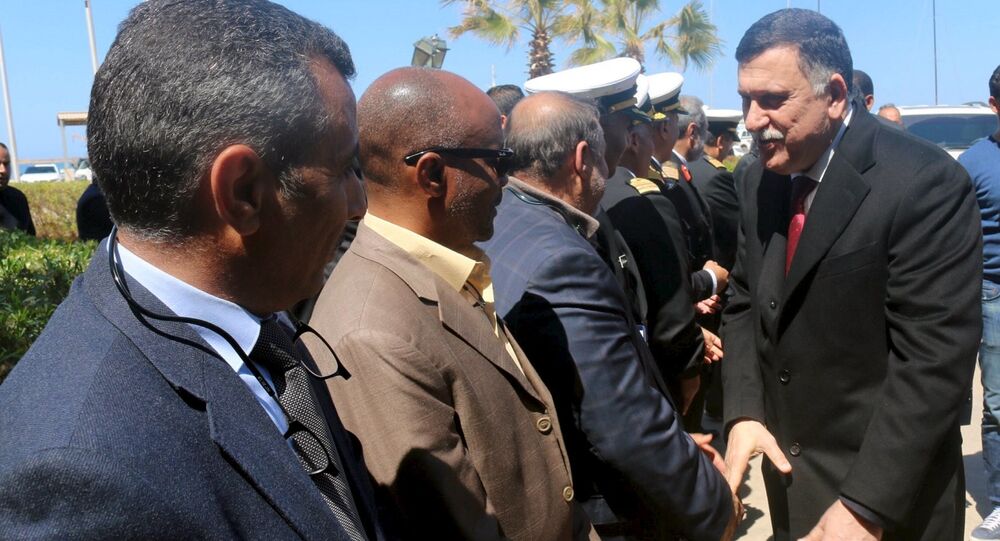 The arrival of Libya's Presidency Council in Tripoli on Wednesday is a positive step in the Libyan peace process that promises to form a united government, Libyan journalist Hend Ali al-Honi told Sputnik.

© AFP 2020 / MAHMUD TURKIA
Libyan Interim PM Says No Clashes Amid Unity Gov't Arrival in Tripoli
The arrival of Libya's Presidency Council, the formation of which was brokered by the UN in Morocco in December, is a step towards reconciliation but after years of war and foreign interference Libyans are adopting a wait-and-see attitude to the new government, Libyan journalist Hend Ali al-Honi told Sputnik Arabic on Thursday.

"It is obvious that international pressure has produced the situation in Libya. The country has been suffering from this complicated conflict and war for years," al-Honi said.

"We are waiting until a clear image appears. We want to know what their interests are; will their interests serve Libya as one united government and maintain its territorial integrity?"

Al-Honi said that many Libyans aspire to the unification and reconciliation of Libya, and that the arrival of the Presidency Council is a step in this direction.

"It is possible that this authority will fail, but it is good for the country; we were afraid of the division of Libya. It is in the interests of Libya to be in harmony with each other and be united."

"The arrival of the members of the Libya Council won’t cause escalation of the political situation in Libya, because there are many who want conciliation."

"Many areas in Libya, not only Tripoli, aspire to conciliation and want the best for the country. Besides, many militant groups and militia declared their loyalty to the Libyan army, as happened in the eastern parts of Libya."

© AP Photo / Mohamed Ben Khalifa
El-Sisi Warns: Reckless Intervention May Turn Libya Into Another 'Somalia'
On December 17 in Skhirat, Morocco, representatives from a broad range of Libyan society signed a United Nations-brokered agreement on forming a Government of National Accord with a Presidency Council, Cabinet, House of Representatives and State Council.

The agreement aims to put Libya back on the path of building a democratic State based on the principles of inclusion, human rights and the rule of law, after four years of factional fighting that has killed many Libyans and left nearly 2.4 million in desperate need of humanitarian aid.

Since Muammar Gaddafi was overthrown in 2011 two rival governments have formed in Tobruk and Tripoli, and many areas of the country are under the control of local administrations and militias who don't answer to any central administration.