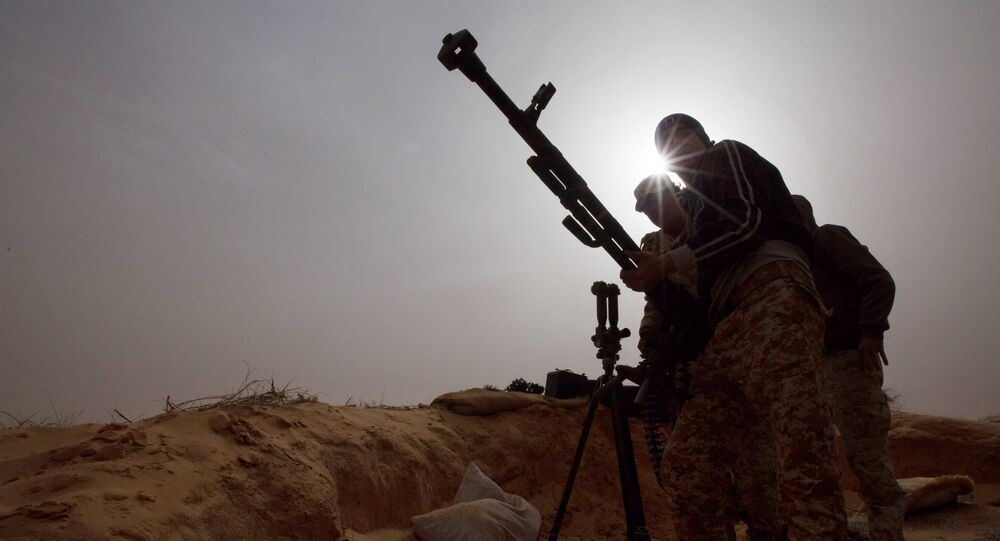 When it comes to Libya, Italy should carefully consider its military plans, as its intervention could make matters worse and turn the already volatile North African nation into complete chaos, Egyptian President Abdel Fattah el-Sisi told the Italian daily La Repubblica in an interview.

The Italian government has been considering a ground military operation in Libya to fight against Daesh militants, crawling around in North Africa.

© AFP 2020 / TIZIANA FABI
New Overseas War? Berlusconi Slams Italy's Involvement in Military Campaign in Libya
According to el-Sisi, before making hasty military decisions and putting boots on Libyan soil, Italy and its allies should consider five important questions. First of all, how would they properly enter and withdraw from Libya? Second, who would be responsible for the restoration of the Libyan Army and police forces? Third, how would they ensure the safety of the local population during a military operation? Fourth, would an intervention serve in the interest of all communities and ethnicities living in Libya? And finally, who would take on reconstruction of the country after a military operation is over?

All these questions are important and must be carefully analyzed before sending troops to Libya. Only then would any military operation have a chance at succeeding, the Egyptian president explained to La Repubblica.

It's important to remember Afghanistan, Somalia and Iraq. All three had military interventions and the results are far from pretty — the countries have lost a lot of their infrastructure, state institutions and have become hotbeds of terrorism, el-Sisi reminded.

The Egyptian president said Europeans are wrong if they think Daesh is the only threat in Libya. Instead, the world should focus on fighting all extremist groups in North Africa.

"[Europeans] need to understand that the threat is an extremist ideology… It's important to understand that the international community is facing different elements with the same ideology: what can one say about al-Qaeda, Ansar al-Islam, Al-Shabaab in Somalia or Boko Haram in Sub-Saharan Africa?" — el-Sisi said, as cited by La Repubblica.

According to el-Sisi, instead of sending Western troops to Libya it would be wiser to support the Libyan government that's already fighting various extremist organizations. Egypt has already been doing this for a couple of years.

If Italy and its allies supported and sent arms to the Libyan Army, it would get rid of extremists better than foreign armies that would only make the situation in the country worse, the Egyptian president explained.

© Wikipedia /
Think the Colonial Era is Over? Look at Libya, Think Again
Quick and wise action is required to ensure stability in Libya, otherwise the entire region risks plunging into chaos.

"Look what's happening with Syrian refugees fleeing to Europe: what would have happened if the EU had to face the influx of refugees two or three times larger than currently? That's why I'm saying that it's impossible to rely only on a military solution to the Libyan problem," el-Sisi said, as cited by La Repubblica.

El-Sisi's words certainly make a lot of sense; however, the only problem is that Libya has yet to form a unified, stable government. Currently, there are two governments in Libya that have been fighting each other for over a year: the internationally-recognized Council of Deputies based in the eastern city of Tobruk and the Tripoli-based General National Congress (GNC).

Although following international pressure, the two sides came to an agreement on December 17, 2015, paving the way for the formation of a potentially unified national parliament, it remains to be seen whether the two Libyan factions can work together and form a government.

Military Intervention in Libya Only Possible Under UNSC Permission