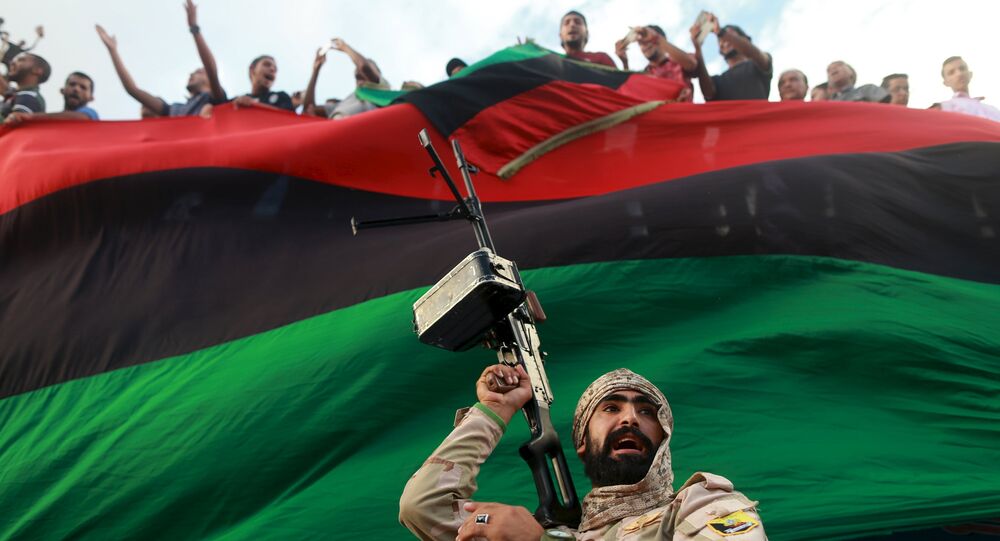 As Libya votes to form a national unity government, activist Sukant Chandan speaks to Radio Sputnik’s Loud & Clear about how the NATO bombing – and Democratic presidential frontrunner Hillary Clinton – have plunged the country into chaos.

"The West needs a unity government on paper in order to justify its next phase of military intervention, which it wants to do under the guise and the excuse of Daesh in Libya," Chandan tells Loud & Clear host Brian Becker, referring to Monday’s election.

"And indeed, Daesh in Libya are a primary, so-called ‘rebel faction’ that the leading NATO powers teamed up with."

Both the NATO bombing and the subsequent support for terrorist groups were used to overthrow former leader Muammar Gaddafi, who had become a threat to Western governments.

"Gaddafi was too radical because he was directly assisting for many decades and continuing a new phase of support to black and Asian people in Europe, and other radical movements," Chandan states. "He had to be cut off, so said imperialism, and that’s what they did."

Without the aid of NATO airstrikes, Libya’s government would have held onto power. It was only with the direct intervention of the West that rebel forces were able to overthrow Gaddafi, violently dragging his body through the street – a sight US presidential frontrunner Hillary Clinton joked about on live television.

"Hillary Clinton is the most hawkish, and frankly…[the joking] betrays her totally sociopathic side to her," Chandan says, adding that, "It was Hillary Clinton who ensured that the death squads in Libya have a leading role to play in the junta in Tripoli."

While the mainstream media portrayed Libyans as suffering under Gaddafi, that depiction was far from the truth.

"The Libyan people – and I’ve visited many working class areas and housing projects, etc. – they lived very well," he says. "It’s well known that the United Nations said Libya had the highest development index of any African country, and I think probably people in Libya had the best living standards of arguably any people of the Global South."

Based on his own personal experience, Chandan describes the uprising as a, "Mickey Mouse, Coca-Cola revolution."

"I had a brief conversation with a pro-rebel, a young Libyan man on one of my flights to Tunisia," he says. "I said…what do you concretely want to happen in Libya? He said, 'Brother, you know every Libyan has a Japanese car. We want a Mercedes or a BMW.'"

In many ways, Gaddafi’s Libya offered a better standard of living than the United States.

"There was labor dignity amongst the working class. There was a massive housing project," Chandan states. "On issues of education, education was free. Not only was Libya the shield of Africa, it was the star of Africa, in the sense that Libya proved what was possible."

Despite today’s vote, Chandan remains skeptical that Libya will find peace in the near future.

"[Imperialist nations] need Libya to be a detestable death squad state to continue destabilizing Tunisia, Mali, Algeria, especially Egypt, but Libyans will keep on fighting, but I don’t think there’s going to be any real strategic possibility to the liberation of Libya for another generation, at least, yet, unfortunately."