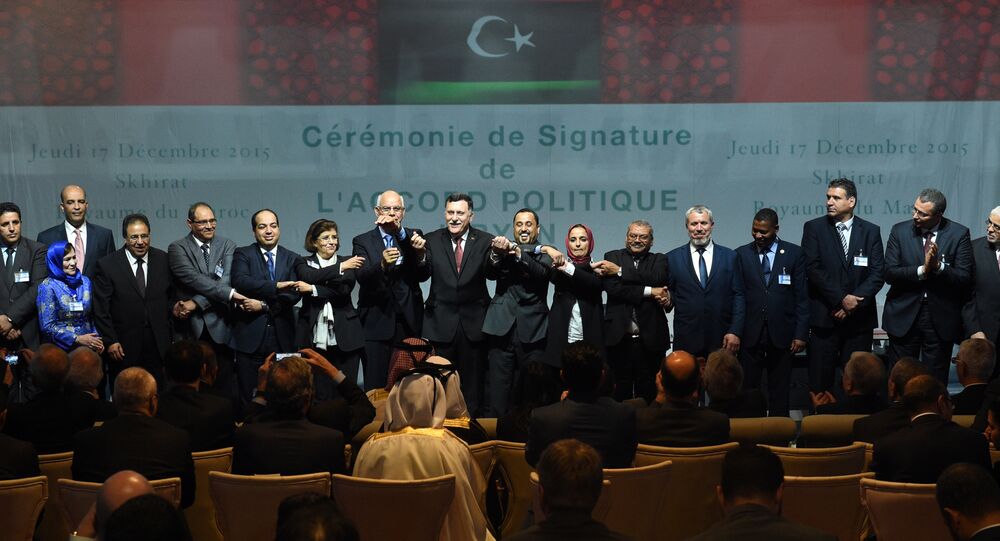 Efforts to put an end to the violence and political instability in Libya have been dealt a huge blow after the country’s internationally recognized parliament rejected a UN-backed plan for a national unity government.

© AFP 2020 / Fethi Belaid
EU Chief in Libya Amid Lack of Western Support in Fight Against Daesh
Libya’s internationally backed parliament, which was forced from the capital of Tripoli into exile in the eastern town of Tobruk in 2014, overwhelmingly rejected the UN plan for a power sharing unity government, with 89 of 104 parliamentarians voting against the proposal.

Since 2014 Libya has been split between two rival parliaments after a group of rebels known as the Libya Dawn took control of the capital Tripoli and forced the existing government into exile.

Both governments are backed by various armed militia groups, while the country has been embroiled in a five-year long civil war following the 2011 Western intervention that resulted in the toppling of former leader Muammar Gadaffi.

As a result of the instability, a number of rebel groups, including Daesh, have been able to carve out areas of control in Libya.

The sense of lawlessness is widely regarded to be a driving factor behind human trafficking and the large number of refugees leaving the North African country en route to Europe.

It was hoped the warring governments were close to coming to a power sharing agreement, with Libya’s Presidential Council last week announcing a unity deal.

"Only united #Libya government supported by all citizens can end divisions and defeat terrorism" @FedericaMog 3/4 https://t.co/MGXuafSfIZ

While the plan attracted some support from both sides, many key members in the Tripoli and Tobruk refused to sign the UN agreement, with critics arguing that the plan didn’t accurately represent the various groups in Libya.

In rejecting the deal, Tobruk parliamentarians on Monday said the proposed 32-member cabinet included too many positions, and have called on moderators to submit alternative proposals within the next 10 days.

A Setback in the Peace Plan

The rejection of the UN deal marks a significant setback in efforts aimed at creating a stable, unified government that can defeat the increasing threat of Daesh.

The Libyan Presidential Council – the UN-endorsed group tasked with trying to bring the country’s warring factions together – are now expected to address the concerns of the Tobruk parliament and deliver another proposal in the hope of forming a unity government.

However those involved in the peace talks have warned that further delays to an agreement will only give rebel groups more time to gain more areas of control in Libya.