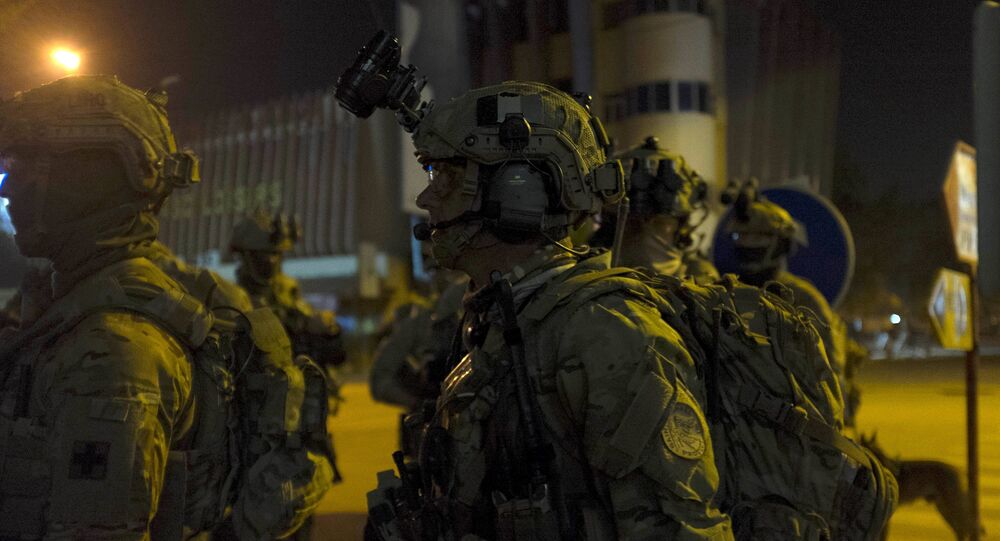 News emerged of gunmen taking over a hotel close to the Splendid Hotel and the Cappuccino restaurant in the capital of Burkina Faso where a security rescue operation recently ended after an unknown number of gumen linked to al-Qaeda took hostages, according to AFP with reference to the Security and Internal Affairs minister.

© AFP 2020 / AHMED OUOBA
Commandos Storm Hotel After Al Qaeda Attack Claims at Least 20 Lives in Burkina Faso
MOSCOW (Sputnik) – A security operation at a hotel and restaurant in the capital of Burkina Faso has finished with 126 hostages freed and four militants killed, the Security and Internal Affairs minister said.

Up to 33 people have been wounded in the hours-long siege at the Splendid hotel and Cappuccino cafe in Ougadougou claimed by al-Qaeda in Maghreb, France Info news radio cited Burkinabe Interior Minister Simon Compaore as saying.

The interior minister als said another assault was ongoing at the Ybi hotel next to the cafe.

Friday evening an unknown number of gunmen attacked the hotel and cafe, frequented by westerners. The raid to retake the hotel and the cafe was conducted by joint US and French-trained Burkinabe forces.

At least 23 people from 18 different countries have been killed in the attack immediately labeled a terrorist act, according to authorities. Ten bodies were reported found at the Cappuccino cafe in the West African country that has been relatively free of terrorist activity to date.

​However, the death toll may rise as the security forces have not finished combing the area, according to the minister.

"We don't yet have a total tally of the dead. The Burkinabe forces are still combing the hotel," he said.

Obama: US Foreign Policy Must Focus on Threat From Daesh, Al-Qaeda

Unexpected: Daesh and al-Qaeda Become Stronger by Fighting Each Other