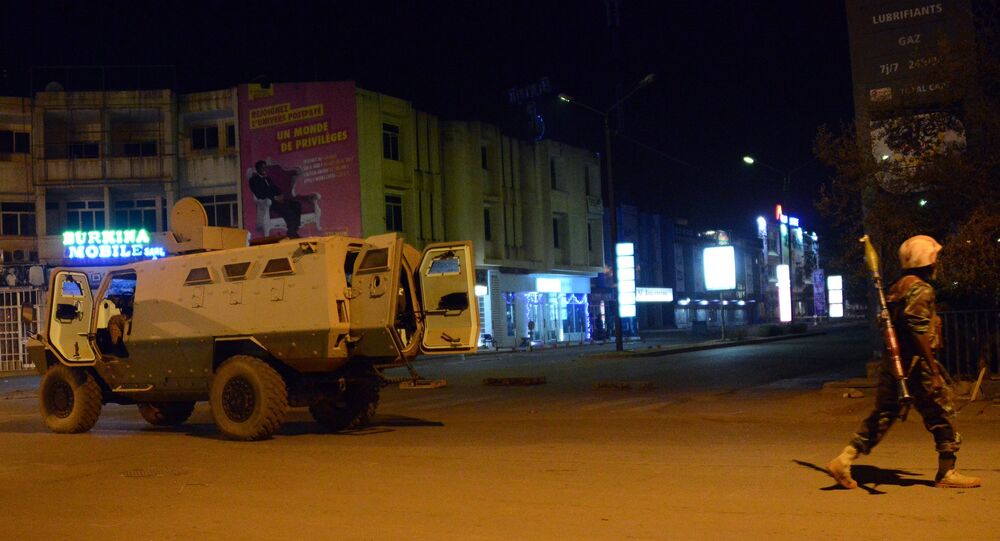 According to latest reports, Remis Dandjinou, Burkina Faso’s minister of communication, said that 63 hostages, including a Burkina Faso minister, have been evacuated from the Splendid Hotel in the country’s capital, Ouagadougou, which came under attack on Friday.

"Liberation of Minister [of the Civil Service, Labour and Social Security] Clement Sawadogo and some thirty hostages. Operation continues," Dandjinou wrote on Twitter.

​In a later post, the communication minister said that 33 people had been evacuated from the hotel.

Earlier, local media reported that dozens of hostages had been freed from the hotel.

A rescued woman sits in a vehicle with bullet hole in windshield near the Splendid Hotel #BurkinaFaso attack pic.twitter.com/fQYFVwxFr2

On Friday evening, several gunmen carried out an attack at Splendid Hotel and nearby Café Cappuccino in Ouagadougou, taking hostages at the hotel.

French Ambassador to Burkina Faso Gilles Thibault confirmed in the early hours of Saturday that defense and security forces had launched an assault on the hotel to free the hostages.

At least 20 people were killed and about 15 were injured in the Friday attack, according to hospital officials cited by local media.

The French Embassy in Burkina Faso called the Ouagadougou attack a terrorist act.

An urgent cabinet meeting has been scheduled for 09:00 a.m. local time on Saturday at the Kosyam Presidential Palace in Ouagadougou.

This marks the first time a terrorist group has carried out an attack in the capital of the West African nation. A similar incident occurred in neighboring Mali last November, when two attackers left 20 people dead after storming the Radisson Blu hotel.

Burkina Faso has struggled with political turmoil since the longtime president Blaise Compaore was overthrown in 2014.