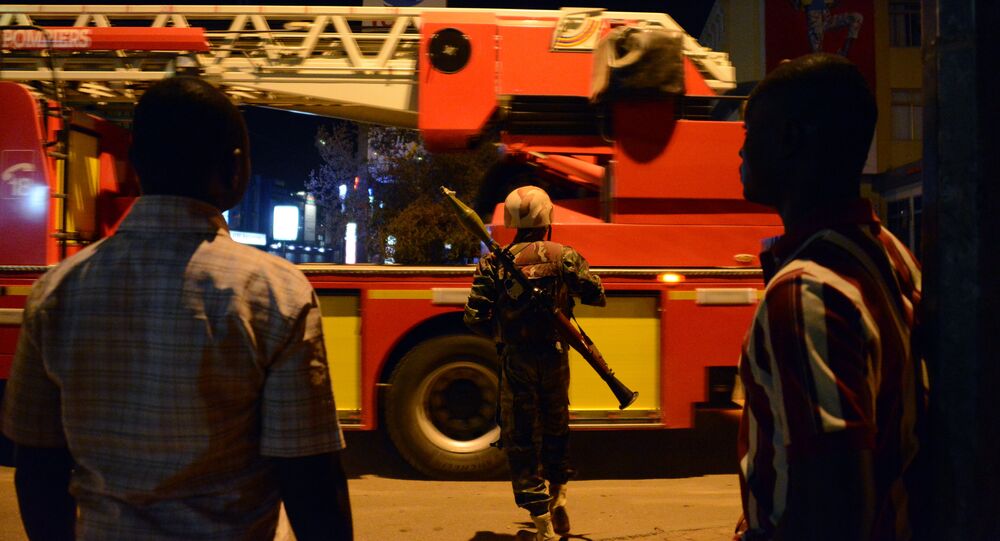 The Splendid Hotel, attacked by al-Qaida militants on Friday, has caught fire after commandos used explosives to storm the building.

Three to four masked men stormed the hotel in the capital city of Ouagadougou, popular among Western tourists, and took an unknown number of hostages. A number of cars were lit on fire outside of the hotel.

Authorities have been engaged with the attackers for over five hours, and some hostages have been freed. According to the French Ambassador, multiple factions of the military are taking part in the operation.

Local news reported later that reinforcements and the security minister have arrived at the attack site.

At least 20 people are believed dead and another 15 are wounded. Several individuals were killed at the Cappuccino cafe across the street.

"At the restaurant that was attacked, six people were killed and multiple others were wounded," Honorary Consul of Russia in Burkina Faso Anna Rachina told RIA Novosti "There are foreigners [among the dead], possibly Europeans and locals."

According to SITE intelligence group, al-Qaida has claimed responsibility for the attack, calling it revenge against the French government.

The hotel is also frequented by French troops with Operation Barkhane, an anti-terror unit based in Chad.

A curfew has also been put into effect until 6:00 GMT on Saturday.

Also multiple flights to Ouagadougou have been diverted after the attack.

​Burkina Info television said that an urgent cabinet meeting was planned for 09:00 a.m. local time on Saturday at the Kosyam Presidential Palace in Ouagadougou.

This marks the first time a terrorist group has carried out an attack in the capital of the West African nation. A similar incident occurred in neighboring Mali last November, when two attackers left 20 people dead after storming the Radisson Blu hotel.

Burkina Faso has struggled with political turmoil since the longtime president Blaise Compaore was overthrown in 2014.