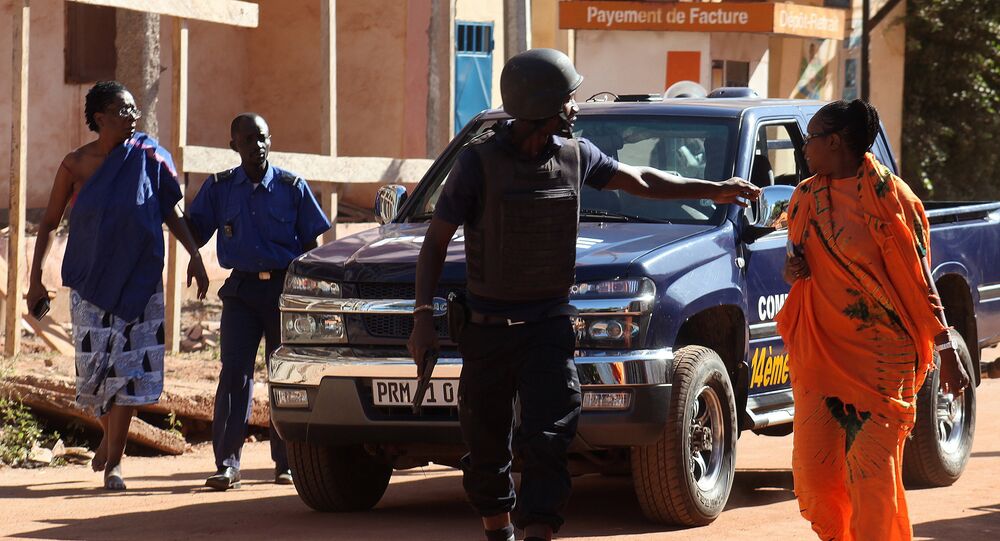 At Least 3 Dead as Hostage Crisis in Mali Hotel Continues

Reportedly, the mastermind of the attack is militant group Ansar Dine, an al-Qaeda affiliate seeking to establish Sharia laws in Mali.

© AFP 2021 / HABIBOU KOUYATE
US, French Special Forces Lead Second Assault on Mali Hotel - Reports
As many as 125 guests and 13 employees of the Radisson Blu hotel are being held hostage in the Malian capital of Bamako by extremists, the hotel operator said in a statement Friday.

“We are closely following the hostage-taking incident that is taking place at the Radisson Blu Hotel, Bamako / Mali today, 20th November 2015. According to our latest information 125 guests and 13 employees are still in the building,” the statement said.

The Malian Special Forces started storming the hotel. Paris sent fifty counter-terrorism officers to assist them. US special forces are also participating in the operation.

The Malian Special Forces freed about 30 hostages during the operation to retake control of the hotel.

Good news! All 20 Indians in the hotel in Bamako have been safely evacuated. Our Ambassador in Mali has confirmed. #MaliAttack

"Our special forces have freed about 30 hostages and others were able to escape on their own," Col. Salif Traore stated, as quoted by the Jeune Afrique news website.

Four Chinese nationals were released, according to the China Central Television.

Earlier in the day, the broadcaster reported, citing the Chinese Embassy in Mali, that about 10 Chinese citizens were among those in the siege.

According to him, three hostages, all foreigners, were killed during the special forces’ operation.

PHOTO: Local on the scene in #Bamako took a photo of a wounded police officer. pic.twitter.com/xwjQA6Sqaa

The attackers arrived at the scene at the same time with a car with diplomatic plates but were not in it, the Malian authorities said. Earlier some media reported that the hostage takers came in that car.

"We're monitoring the situation," US President Barack Obama said when asked about the unfolding events in Mali.

Earlier in the day, several gunmen took 170 people hostages in the Radisson Blu Hotel in Mali's capital Bamako. According to French media, at least three people have been killed by the terrorists.

Hollande Pledges to Provide Support to Mali Amid Hotel Siege