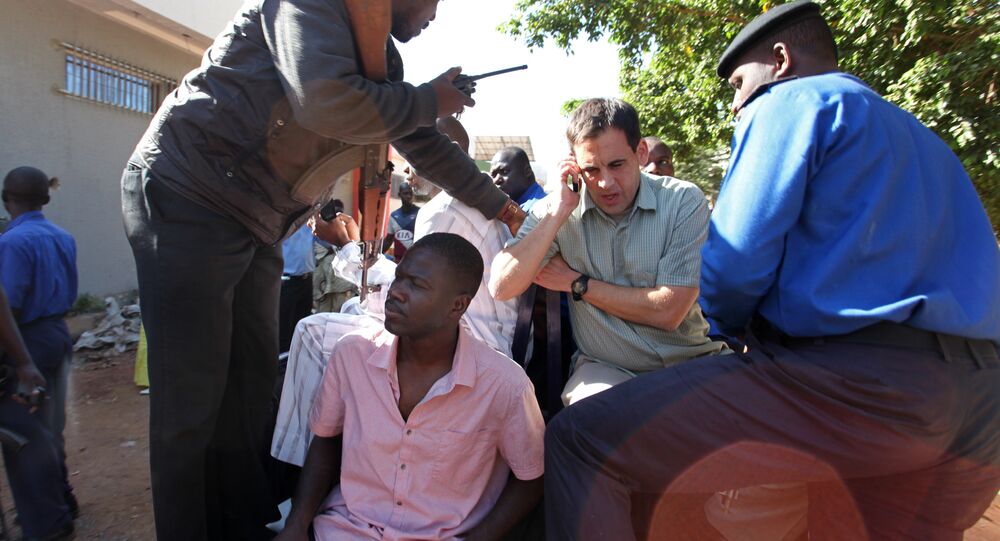 Gunmen took 170 people hostage in a Radisson Hotel in Bamako, Mali, according to a spokesperson from the hotel group. Some people, including those who could cite Quran verses, have been freed.

Unidentified men opened fire in the Radisson Blu hotel in the Malian capital of Bamako. Two Malians and one French citizen were killed, a UN official said.

Security forces have established a perimeter around the hotel and sealed it off. France sent 50 counter-terrorism officers to assist the Malian Special Forces in Bamako.

"They have locked in about 140 guests and about 30 employees. So the hotel is locked down and there is no possibility to go out or come in," NBC quoted the spokesperson as saying.

"I heard them say in English 'Did you load it?', 'Let's go'," famous Guinean singer Sékouba 'Bambino' Diabate, who was freed by Malian security forces, told Reuters in Conakry. "I wasn't able to see them because in these kinds of situations it's hard."

BREAKING: Two gunmen at #Bamako #Radisson in #Mali have released some hostages, reportedly after they could cite verses from the Quran.

PHOTO: People being evacuated from around the #Radisson hotel in #Bamako, #Mali. — @lemondefr / @AP pic.twitter.com/uoy94vTWnG

Acc to @libe, gunmen are on the 7th floor of the #Radisson where the Air France crew's hotel rooms are. #Bamako, #Mali

The assailants are said to have spent the night in the hotel. Reportedly, they used grenades during the attack.

France's RFI radio reported earlier that three gunmen in diplomatic vehicles arrived earlier and began shooting in the hotel's gardens before entering the building. At least two security guards were wounded during the attack.

The US Embassy in Mali has confirmed the attack. Malian Prime Minister Modibo Keita summoned a crisis unit. President Ibrahim Boubacar Keita canceled his trip in Chad and is returning to the capital. Chadian President Idriss Deby expressed his condolences.

Hostages have been taken at the Radisson hotel — a place everybody knows. There are men and women, citizens who are just doing their jobs and have been targeted. I condemn in the strongest possible way this barbaric act which has nothing to do with religion. I reaffirm our unending support for our brother Ibrahim Boubacar Keitaand all the people of Mali. Nothing is very clear as yet. But we can expect blood and tears," Deby was quoted as saying by the Mirror.

BREAKING: @StateDept #US Embassy #Bamako issues warning to its citizens to keep safe in #Mali as shooting reported @RadissonBlu. Hostages

The UN mission in Mali (MINUSMA) condemned the attack and said it was helping local authorities to provide medical assistance on site.

"The Special Representative of the Secretary General of the United Nations and MINUSMA deplore the terrorist attack underway at a Bamako hotel."

"MINUSMA is currently supporting Malian authorities and provides security reinforcement while medical means are being deployed on site," the statement reads.

The hotel is very popular with foreigners. It is located in the center of Bamako in the vicinity of governmental buildings.

,. Picture from #Bamako #Mali where 2gunmens hostages almost 170 people.you can see terror and panic all over there pic.twitter.com/uKIoj8VF7Y"

The Russian embassy currently has no information regarding Russians being involved in the siege, the embassy's administrative assistant Anton Plotnikov told RIA Novosti. "We are working on this, and can neither confirm nor deny anything at the time," he said.

"There has been information from other sources that a special operation is being carried out with the participation of an elite squad of Mali's national gendarmerie… That was a big group armed with weapons like the Kalashnikov assault rifles."

No group has claimed responsibility for the attack. In recent months, Malian security services have thwarted several terror attacks plotted by The Macina Liberation Front — a group referred to as "a new Boko Haram" by local media.

According to @lemondefr, this #Radisson hotel is frequently used by @airfrance crew. Reports that among the hostages today are AF. #Bamako

In August, the African country was rattled by an attack by a suspected jihadist who killed 13 people, including five UN employees, during a 24-hour-long hostage siege in the town of Sevare, 370 miles northeast of Bamako.

The number of assaults, including rocket attacks, suicide bombings and land mines causing injuries and casualties among UN peacekeepers in Mali soared dramatically over the past year.

A French colony until 1960, Mali has been in turmoil since a 2012 military coup. Separatist tribes seized control over vast territories in northern Mali, and various Islamist groups including Boko Haram started to operate in the country.