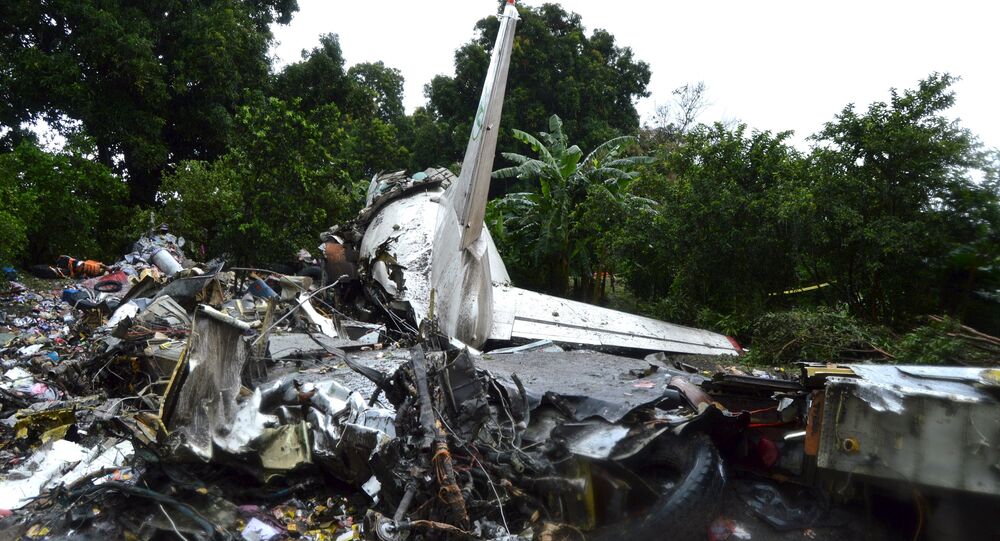 Three of 18 people who were on board of the cargo plane that crashed in South Sudan on Wednesday survived, they are all South Sudanese citizens, presidential spokesman Ateny Wek Ateny told Sputnik.

"There were 12 passengers and six crew members, including five Armenians and one Russian, were on board of the An-12 plane that crashed in South Sudan," Ateny said, adding that all passengers were Sudanese.

"The three survivors of the plane crash in South Sudan are citizens of South Sudan, Ateny said.

© REUTERS / Stringer
UN Mission in S Sudan to Provide Aid to Rescue Operation at An-12 Crash Site
The spokesman confirmed that the plane belonged to the local Allied Services Limited airline.

Earlier a member of the South Sudanese Ministry of Information and Broadcasting told Sputnik that 17 people, two of whom survived, were on board of the cargo plane that crashed in South Sudan on Wednesday, it is too early to determine their nationalities

"It was a cargo plane and there were 17 people on board. 15 died, and two survived… We still do not know the cause of the crash. We have no details about the people on board, so we don't want to speculate, but we are going to have this information soon." Paul Jacob Kumbo, Director of Public Information at the ministry, said.

According to Kumbo, a child was among the survivors.

Earlier in the day South Sudan Tribune reported that a cargo aircraft with five Russian crew members and passengers including childrens on board has crash-landed in South Sudan’s capital shortly after taking off. People on the ground killed in the crash besides crew and passengers on board.

Anti nov 12 cargo plane that crash in Juba today had 5 Russian crew and 7 passengers. Only 2 survivors including a child.

"Anti nov [Antonov] 12 cargo plane that crash in Juba today had 5 Russian crew and 7 passengers. Only 2 survivors including a child," South Sudan Tribune wrote on Twitter.

According to local media reports, the plane was headed to Paloich in the Upper Nile Region. Overloading, technical issues are among possible reasinf for the cradh, the local media reports citing Sudanese civil aviation department.

Reuters reports citing eyewitnesses at the crash scene that over 40 bodies were found while up to 20 people could have been on board.

The Russian Foreign Ministry is checking information about the crash of a Russian cargo plane in South Sudan, the press service said in a statement Wednesday.

"We are checking information," the press service said.

The Russian embassy in Uganda is clarifying the information on the crash of the Russian cargo plane in South Sudan, the embassy's spokesperson said Wednesday.

"We are clarifying details. We cannot say anything in particular. We are getting in touch with the competent authorities of South Sudan," Radmir Gaynanov told RIA Novosti.

Ukraine's Antonov aircraft manufacturer is verifying reports on the crash of its An-12 model in South Sudan, the company's press service said Wednesday.

"We are now dealing with this issue. Our experts are trying to find out what side number the plane had," the press service told RIA Novosti.

No Signs of Explosives Impact on Russian A321 Plane Crash Victims