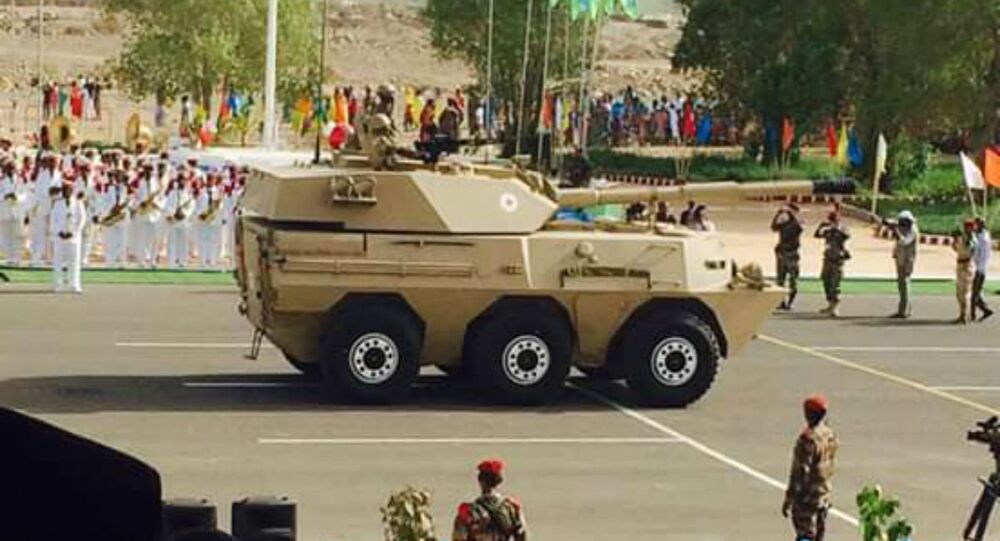 Amid rumors of the installment of a Chinese military base in the Horn of Africa country, the Djiboutian Armed Forces (FAD) unveiled a new Chinese tank destroyer during its Independence Day parade on June 27.

© AP Photo / Ng Han Guan
Is China Building a Military Base in Djibouti?
China North Industries Corporation, or Norinco, specializes in the production of high-tech defense products, including precision strike systems and amphibious assault weapons and equipment. The company is ranked as one of the top 500 state-owned enterprises in China, and one of its assault tanks was displayed on Saturday during Djibouti’s Independence Day Parade.

With similar fire-power to a tank, but slightly more affordable and easier to maintain, Norinco’s WMA301 Assault Tank destroyer consists of a 6x6 armored personnel carrier fitted with a 105 mm gun atop a three-person turret, IHS Jane reports. The assault tank will be a new addition to the FAD which does not currently have any tanks, but only armored vehicles that have fire-support capabilities.

The WMA301 Assault Tank’s unveiling comes nearly two months after Djiboutian President Ismail Guelleh said his country was in talks with China over the installment of a military base in the small, but strategically important, African country.

Due to its strategic position between Somalia and Yemen, the US already has its regional military based in Djibouti, from where it carries out covert and anti-terror operations across Africa. France and Japan also have military bases located there.

"France’s presence is old, and the Americans found that the position of Djibouti could helped in the fight against terrorism in the region," Guelleh told AFP during an interview in May. "The Japanese want to protect themselves from privacy – and now the Chinese also want to protect their interests, and they are welcome."

China’s Defense Ministry last week declined to confirm the reports, saying only that both countries have a friendly relationship and that both are interested in regional peace and security.

Beijing’s strengthening relations with Djibouti over recent years, along with the FAD’s recent unveiling of the assault tank, are however likely to reignite concerns in Washington over China’s expanding "sphere of influence" in the region.

In May, US Rep. Randy Forbes, the chairman of the seapower subcommittee of the House Armed Services Committee, warned that "China’s determination for permanent basis far outside their traditional area of influence should remind Washington that Beijing sees itself as a global power."