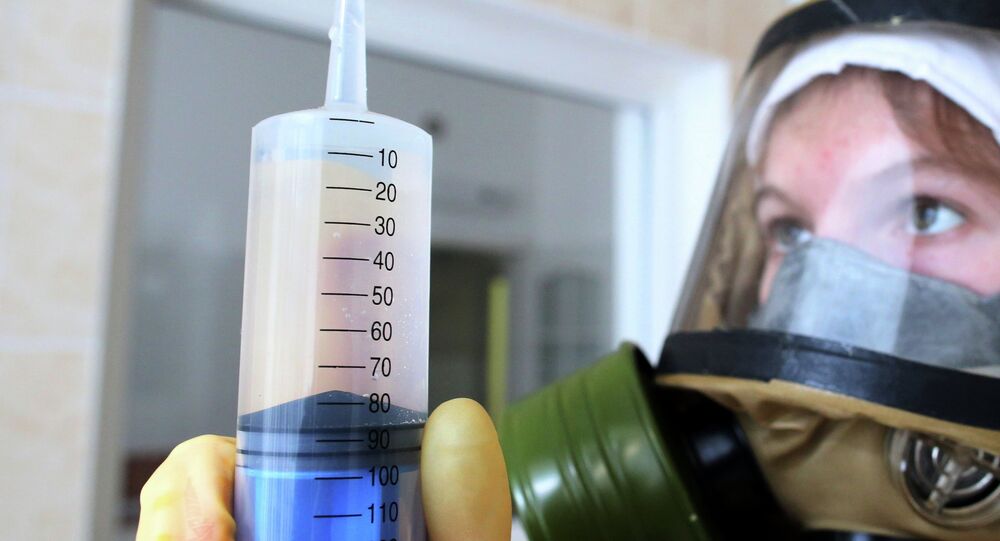 The Ebola vaccine trial program, known as STRIVE, is set to enroll at least 6,000 health and other frontline workers from districts in Sierra Leone where the Ebola outbreak affected the most people

© REUTERS / Gary Cameron/Files
Ebola Positive US Citizen Discharged From Maryland Health Facility - NIH
WASHINGTON  (Sputnik) — The health agencies of Sierra Leone and the United States are enrolling some 6,000 volunteers in Sierra Leone in trials for the Ebola virus vaccine, the US Centers for Disease Control and Prevention announced in a statement on Tuesday.

“The Centers for Disease Control and Prevention (CDC), in partnership with the Sierra Leone College of Medicine and Allied Health Sciences (COMAHS) and the Sierra Leone Ministry of Health and Sanitation (MoHS), is now enrolling and vaccinating volunteers for the Sierra Leone Trial to Introduce a Vaccine against Ebola (STRIVE),” the statement said.

The Ebola vaccine trial program, known as STRIVE, is set to enroll at least 6,000 health and other frontline workers from districts in Sierra Leone where the Ebola outbreak affected the most people, according to the Center for Disease Control.

STRIVE will study the safety of the rVSV-ZEBOV vaccine, which uses a virus carrying a non-infectious Ebola virus gene on the volunteers to try to create an immune response from the patient to protect them against the disease, the Center for Disease Control explained.

Luc Gnago
Over 25,500 Cases of Deadly Ebola Virus Registered in West Africa
Participants will receive the drug and will be closely monitored for six months by health experts to determine the vaccine’s effectiveness.

“A safe and effective vaccine would be a very important tool to stop Ebola in the future, and the frontline workers who are volunteering to participate are making a decision that could benefit health care professionals and communities wherever Ebola is a risk,” Center for Disease Control Director Tom Frieden said in the statement.

“We hope this vaccine will be proven effective, but in the meantime we must continue doing everything necessary to stop this epidemic — find every case, isolate and treat, safely and respectfully bury the dead, and find every single contact,” he added.

The vaccine trial comes after the recent 2014 outbreak of the Ebola virus epidemic, which began in southern Guinea and later spread to Liberia, Sierra Leone, Nigeria and Senegal.

The current Ebola outbreak in West Africa has killed at least 10,587 people since it started in 2014, according to the latest World Health Organization (WHO) estimates.

Russia, Canada, Japan and the United Kingdom are also working on developing a vaccine for the Ebola virus.