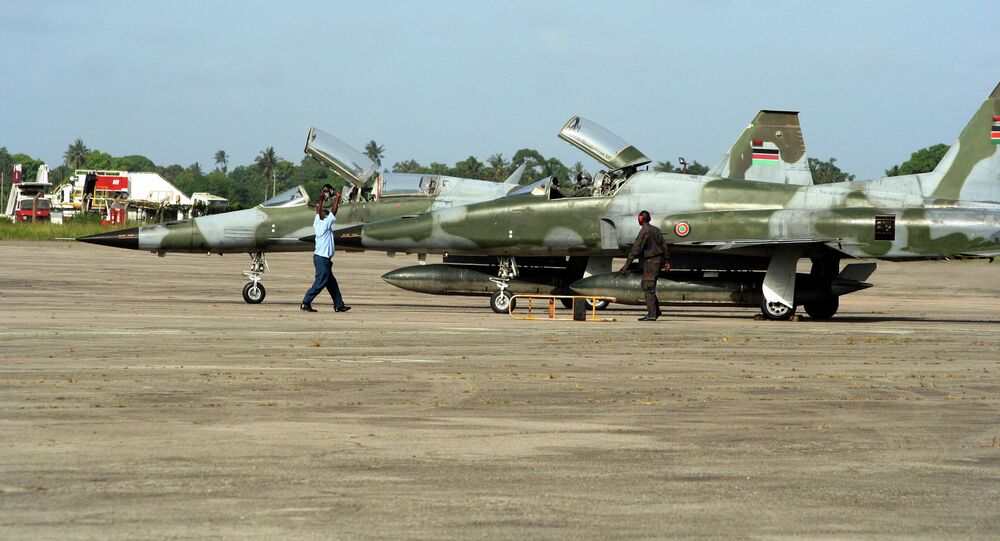 The Kenyan Air Force bombed two camps controlled by the al-Shabaab group in Somalia after al-Shabaab militants broke into Garissa University College, killing 148 people and injuring over 100 others.

One of the targets of the Kenyan fighter jets was reportedly the Gadonhawe village located near the Kenya border. The village has seen intense fighting between Kenyan military and the al-Shabaab Islamist militant group beginning in March.

On March 18, al-Shabaab militants armed with heavy weapons seized the village, which had been under control of Kenyan soldiers since November 2014. The assault was reported to have left 20 Kenyan soldiers dead.

© AFP 2021 / Mohamed Abdiwahab
Hostage Crisis at Mogadishu Hotel in Somalia Over
Last Thursday, al-Shabaab militants broke into Garissa University College, killing 148 people and injuring over 100 others. Following the massacre, the militants vowed to carry out more attacks in the country.

Al-Shabaab, which pleaded allegiance to al-Qaeda in 2012, has carried out numerous attacks in Kenya, including the killings at the Westgate shopping mall in Nairobi in September 2013, which left at least 67 dead.

The militant group claims that the attacks are a revenge for Kenya’s military presence in Somalia. Kenyan troops were deployed in Somalia in October 2011 to fight the insurgents after a series of kidnappings by the group.