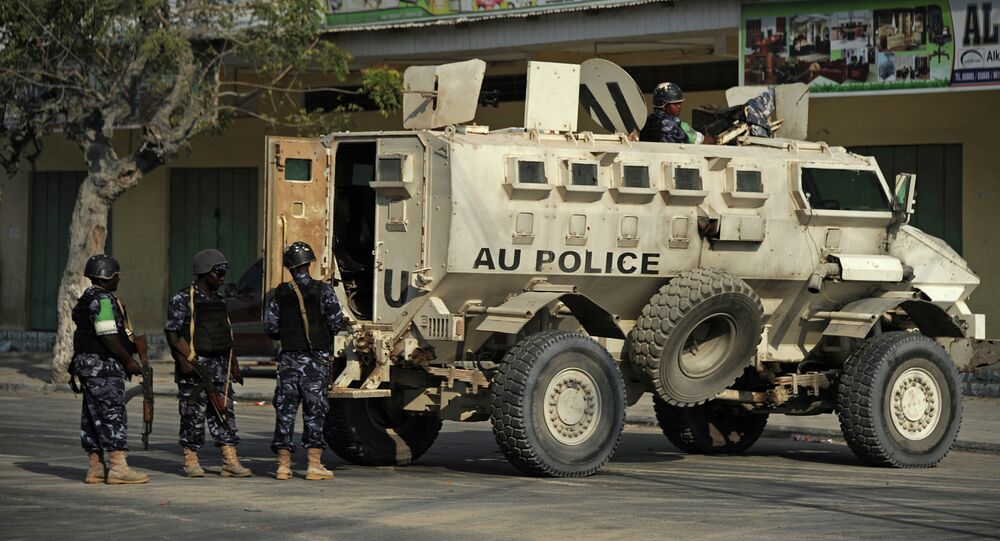 The UN Security Council unanimously agreed to a press statement condemning the attack by Al-Shabaab on a hotel in Mogadishu.

UNITED NATIONS (Sputnik) — The day after a terrorist assault on a hotel in Mogadishu, the UN Security Council on Saturday unanimously agreed to a press statement condemning the attack by Al-Shabaab and calling for the attackers to be brought to justice.

On Friday, an al-Shabaab militant set off his car bomb outside the Maka al-Mukarama hotel in Mogadishu, clearing way for at least four gunmen who entered the hotel taking dozens of people hostages. A second blast was heard inside the hotel after the militants entered it. Later the same day Somalian security forces have retaken control over the building. The attack resulted in the death of at least nine people, including the ambassador of Somalia to the UN Geneva office, Yusuf Mohamed Ismail Bari-Bari. At least 11 more have been injured.

© AFP 2021 / Mohamed Abdiwahab
Somalia Hotel Attack Death Toll Jumps to 15
“The members of the Security Council strongly condemn the attack on 27 March on the Maka al-Mukarama hotel in Mogadishu, perpetrated by Al-Shabaab, which has caused the death and injury of many innocent Somalis,” the Security Council said in its press statement, stressing the need to bring all the perpetrators to justice.

The members of the Security Council expressed their condolences to the families of the victims, as well as to the people and government of Somalia, wishing a speedy recovery to those injured.

The Security Council also praised “swift response and courage of the Somali National Security Forces” in responding to the Friday attack.

Al-Shabaab is a jihadist terrorist group linked to al-Qaeda. In 2006 al-Shabaab violently took over most of southern Somalia.

Somali Ambassador to UN Killed in Attack on Mogadishu Hotel