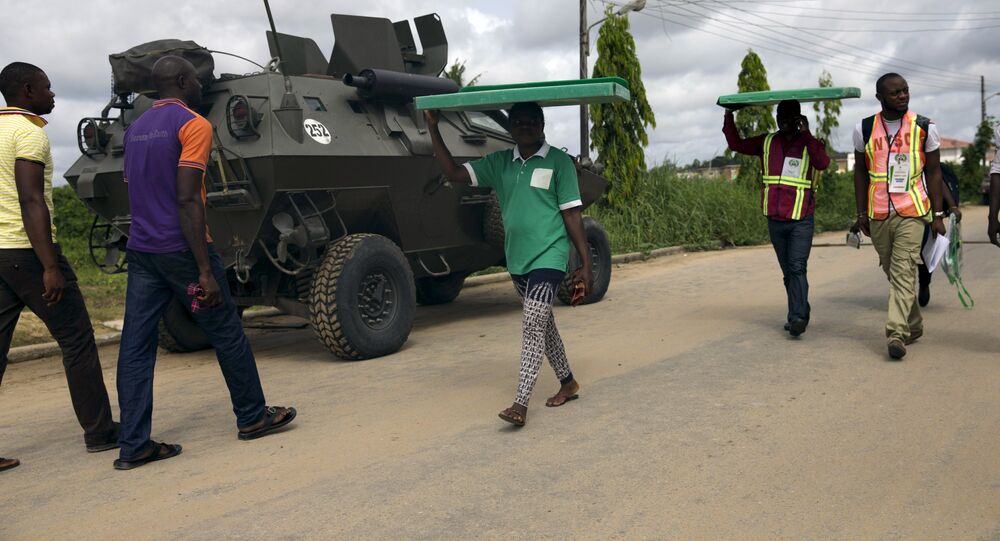 © REUTERS / Andrew Winning
Nigeria Pledges to Destroy Boko Haram by April as Violence Intensifies
Nigeria's 2015 general election has gotten off to an explosive start on Saturday morning, as local television is reporting that a polling station in the country's southeastern Elugu state has been bombed. Another bomb blast hit a polling station at a primary school in Awka, the capital of Nigeria's eastern Anambra state, with no injuries reported.

The current election was previously delayed from February 14 due to the Boko Haram insurgency's controlling of vast swathes of Nigeria's northeast, an opposition heartland.

Nigeria is also experimenting with a new voter ID system which uses two-step verification from both the voter ID card and the voter's fingerprint to prevent voter fraud. While the challenger candidate, Muhammadu Buhari, announced that he is content with the new system, the incumbent, Goodluck Jonathan, had some trouble as three separate card readers failed to register his fingerprint, and he has yet to vote.

"If I can endure, you see my sweat? I plead with all Nigerians to be patient, no matter the pains we take," Jonathan told reporters.

Nigerian media reports that voting delays are occurring across the country as malfunctioning voter registration machines take as long as 45 minutes to process two people.

Hackers purporting to be from the "Nigerian Cyber Army" defaced the website of Nigeria's Independent Electoral Commission and issued a warning against vote-rigging.

In the presidential election, 14 candidates are competing, although the front-runners are expected to be Goodluck Jonathan, the country's president since 2006, and Muhammadu Buhari, the country's former military dictator between 1983 and 1985. The run-up to the election has been plagued by violence, as both ruling party and opposition rallies were attacked by bombings across the country. Over 800 people were killed in riots following the 2011 Nigerian election, which also saw Jonathan face off against Buhari.