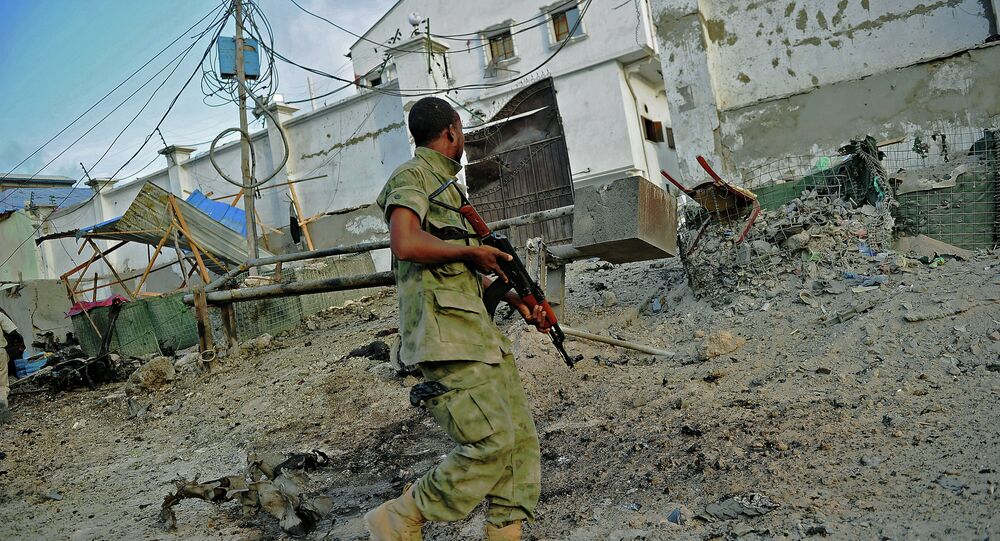 Security forces have allegedly retaken control of a hotel in the nation's capital Mogadishu.

© REUTERS / Feisal Omar
Somali Ambassador to UN Killed in Attack on Mogadishu Hotel
MOSCOW (Sputnik) – Somalian security forces have allegedly retaken control of a hotel in the nation's capital Mogadishu, ending a deadly shootout with terrorists who have been holed up there for 12 hours, a local reporter said Saturday.

"Maka-Almukarama hostage crisis now is over," the reporter said in a Twitter post, adding police were in full control of the building.

All hostages have been released. At least nine others were killed in a blast that was triggered by a suicide bomber as militants stormed the hotel in the Somalian capital on Friday. The ambassador of Somalia to the UN Geneva office, Yusuf Mohamed Ismail Bari-Bari, was among the casualties.

The crisis broke out when a bomber set off his explosives-laden car outside the hotel, clearing way for at least four gunmen who took hostages after exchanging fire with police. A second blast was heard inside the hotel after the militants entered it.

An unknown number of hotel guests was trapped inside the hotel, which is popular with government officials and lawmakers.

Al-Shabab is largely believed to be behind the violent attack. It is a militant group with links to the international terrorist organization al-Qaeda. It has been in control of most of southern Somalia since 2006, using the territory as a launching pad for attacks across Somalia and also in neighboring countries.

Somali Ambassador to UN Killed in Attack on Mogadishu Hotel