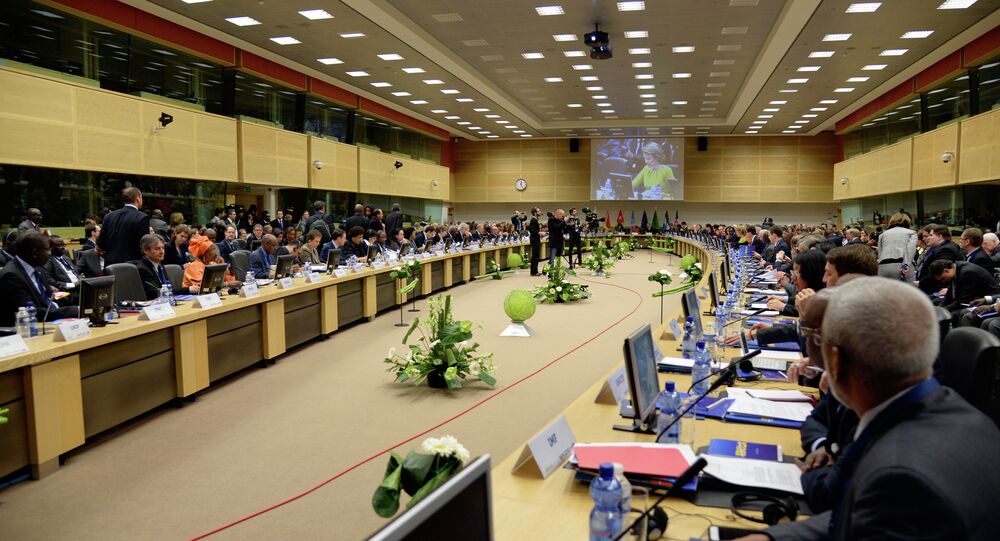 Tuesday's Ebola conference in Brussels, which has attracted more than 60 delegations, will review the continuing fight against the disease.

© AP Photo / Alexander F. Yuan
North Korea Ends Ebola-Related Travel Restrictions
A high-level conference in Brussels on Tuesday, co-chaired by the United Nations, African Union and several states of West Africa, is to take stock of efforts which have been implemented to fight the disease so far, as well as coordinate efforts to eradicate the virus and aid in the recovery process of the affected countries.

According to the UN Secretary General's Special Envoy on Ebola, Dr. David Nabarro, speaking at a session called "Getting to Zero," currently ten times fewer people are being diagnosed each week with Ebola than in September of last year after a "massive increase in response capacity," including the provision of five times more treatment beds, safer burials and support from health workers.

However, remarked Nabarro, in recent weeks "there have been some flare-ups," and cautioned that the second response phase, to eradicate the disease completely, "is the hardest part," and requires high levels of coordination within and between states.

Chairing the conference with the UN are the leaders of the three West African countries which were the hardest hit by the Ebola outbreak: Liberian President Ellen Johnson Sirleaf, Sierra Leone President Ernest Bai Koroma and the President of Guinea Alpha Conde, as well as President Faure Gnassingbe of Togo, the Ebola coordinator of the Economic Community of West African States.
© Flickr / son of jadedtom
Texas Nurse Suing Hospital Where She Contracted Ebola
President Sirleaf of Liberia urged the international community to offer significant financial support, "perhaps even a Marshall Plan," to rebuild communities that had been devastated by the disease, echoing a call made by Oxfam last month for more aid from developed countries. "The world cannot walk away now that, thankfully, cases of this deadly disease are dropping. Failure to help these countries after surviving Ebola will condemn them to a double-disaster," said Oxfam GB's chief executive Mark Goldring on a visit to Liberia in January.

In a joint statement released with Oxfam on Tuesday, Sirleaf said that due to the Ebola outbreak, children in Liberia have not attended school since August, while more than half of the country’s 4,600 schools have no access to water and 43 percent of the schools lack working toilets.

"Investment in water and sanitation is critical to help guard against future outbreaks of Ebola and other infectious diseases," said Sirleaf.

In her opening speech at the conference, UN Development Program Administrator Helen Clark spoke of "the devastating impact" of the virus, and the "bumpy road to zero."

"At the earliest opportunity, health systems must be strengthened, water and sanitation provision extended, and living conditions in informal settlements improved," said Clark, adding that "we also need to ensure that recovery efforts address the drivers of the fragility which produced the crisis."

According to figures from the UN, the Ebola virus has killed at least 9,500 people and infected about 24,000. Of the $1.5 billion the UN says is required by its agencies and key organizations administering aid, $600 million has been received already. Of the remaining $900 million funding gap, said the UN on Tuesday, around $400 million is urgently needed for critical action to tackle the disease.