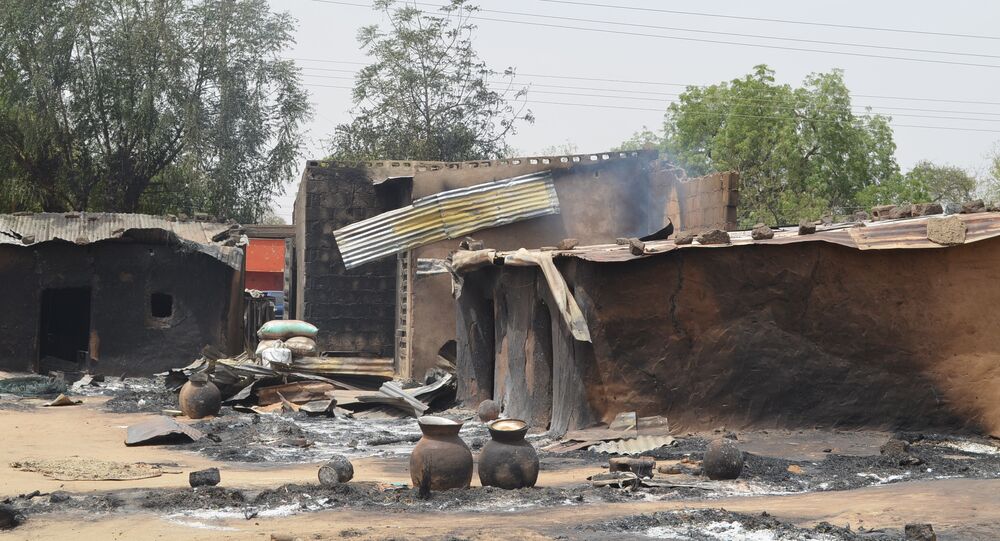 Boko Haram militants burned the town of Askira Uba in northeastern Nigeria to the ground, as north of the country continues to be plagued by suicide bombings and election violence erupts in the south.

© AP Photo / Jossy Ola, File
Female Suicide Bomber Kills 10 in 'Boko Haram-Style' Attack in Nigeria
Boko Haram razed the town of Askira Ua to the ground in Nigeria's Borno state on Monday, as its residents fled, leaving behind only the sick and elderly.

"We don't know their fate in the hands of Boko Haram," a guard at the palace of a local chief told AFP.

Boko Haram fighters burned down homes and public buildings at around 7:30 p.m. on Monday, following an attack on the local chief's palace on Sunday.

According to the guard, Nigerian army troops were deployed 12 kilometers away, but refused to deploy.

Three suicide bombers on a motorized rickshaw killed eleven people at a military checkpoint in the town of Biu in northwest Nigeria on Tuesday, as the country continues to prepare for its March 28 election.

Earlier on Tuesday, a suicide bomber killed two people and injured 12 at a restaurant in the town of Potiskum, in Nigeria's Borno state.

Political Violence Explodes in the South

© REUTERS / Afolabi Sotunde
Jonathan Rally Hit by Suicide Bomber, Nigeria on Brink of Election Chaos
A rally of the opposition All Progressives Congress (APC) party was disrupted after an explosive went off at the event, which took place in the town of Okrika, a port town oil-rich southern Rivers state, and the hometown of President Goodluck Jonathan's wife. Organizers initially attempted to proceed with the rally, but unknown gunmen fired gunshot, creating a second wave of chaos after which the rally did not proceed.

The explosion and gunfire took place at the rally of the state's governor, Rotimi Amaechi, who defected from Jonathan's People's Democratic Party (PDP) to the APC in 2013.

According to the National Human Rights Commission, 58 people have been killed as a result of political violence in the lead-up to the 2015 general election thus far.