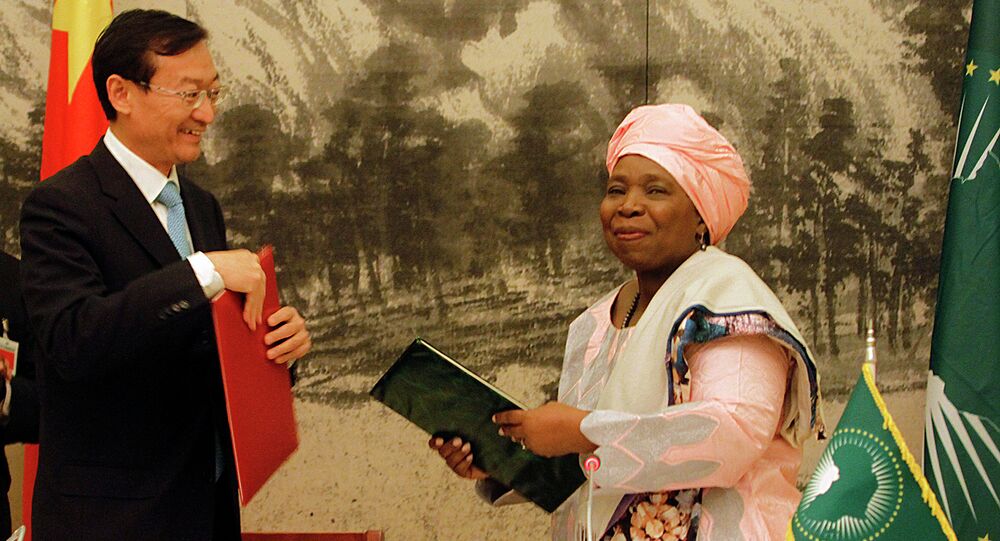 China and the African Union have recently inked an ambitious agreement on the development of a vast transport infrastructure project for Africa; Sputnik searched for expert commentary on the matter to explain the interests behind the agreement.

© Sputnik / Sergey Guneev
UN Chief Welcomes African Union's Focus on Boko Haram Threat
MOSCOW, February 2 (Sputnik) — The African Union and China have recently agreed to on an ambitious transport infrastructure blueprint, aiming to link the capitals of all 54 states of the African continent via motorways, rail and air links. Promoting the development of a mature system of transport infrastructure in Africa will be extremely beneficial to China, guaranteeing it access to natural resources and markets on the continent, Chatham House Asia Program Associate Fellow James Edward Hoare told Sputnik on Monday.

"In the past, Chinese interest in Africa was strongly ideological, part of the competition with the USSR for world-wide influence. It also tended to support 'freedom fighters' against Western imperialism. Those days have long gone and China's main interest in the region now is resources and access to them. Cultivating African leaders and building up the transport infrastructure is a good way of guaranteeing access to resources," Mr. Hoare explains.

The policy expert notes that naturally, "this means competing with other countries that also want resources." Hoare notes that the advantage of the Chinese investment approach tends to be that "the Chinese tend to take a long-tern view" of things. He believes that Chinese projects to invest in railway infrastructure are particularly beneficial, noting that "investing in a project like a railway makes sense. Railway building is labor intensive and the Chinese have plenty of labor and in recent years much experience in constructing modern railway systems."

© REUTERS / Wu Hong/Pool
China Announces New 'Silk Road' Through Russia, India
The AU-China Memorandum of Understanding signed in Addis Abeda by AU Commission Chairwoman Nkosazana Dlamini-Zuma and Chinese Deputy Minister of Foreign Affairs Zhang Ming ahead of this past weekend's AU Summit is drawn up in very general terms. The program calls on Africa to mobilize its massive resources to help to implement the ambitious project. Over time, more specified plans are expected to be drawn up on the creation of new multilane highways, high-speed rail, ports, underwater communications infrastructure, hydropower and industrial projects with the assistance of Chinese contractors.

Xinhua quoted Ms. Zuma as saying that "China will be a key partner in our noble quest for transformation through industrialization and development of modern infrastructure like high speed trains, superhighways, ports and ICT infrastructure." The Chairwoman added that the China-Africa "relationship…the cooperation, is taking a different height, a different level, and a different dimension."

African and Chinese officials and commentators have challenged Western analysts' accusations that the new projects are a form of neocolonialism. AU Commissioner for Infrastructure and Energy Elham Ibrahim told Xinhua that "for colonialism, I think one is benefiting and the other is losing, but China-Africa cooperation can benefit both."

Frank Rumpenhorst
Africa Loses at Least $50 Bln Annually Through Illicit Financial Flows
In an op-ed for Xinhua on Monday, columnist Wang Xiangjiang noted that the "neocolonialism" claims by Western commentators are a matter of "sour grapes." He noted that Africa's "weak status in the global economy" is rooted "in the colonial past," and that Western powers have kept the continent a supplier of natural resources and a dumping ground for its manufactured goods long after countries' gaining of independence. Aptly citing the Chinese proverb that "wealth is not far away if roads are built," he noted that "China is willing to share with Africa the most valuable experience it has learned…over the past 30-odd years of reform and opening up and rapid economic growth."

Over the past decade-and-a-half, China has completed 1,046 projects in Africa, including over 2,200 km of railways and over 3,500 km of highways.