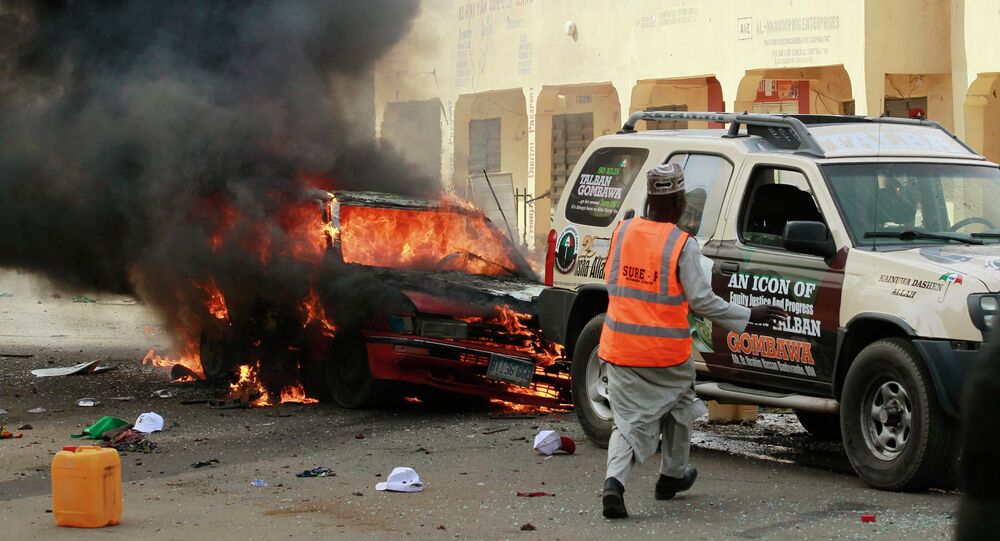 A car bomb exploded outside of a Goodluck Jonathan campaign rally as rhetoric heats up ahead of the election, and the ICC issues a warning to Nigerian political leaders.

"We have evacuated two bodies of females we believe were suicide bombers behind the blast," a rescue worker told the agency.

The upcoming election has also been marked by tensions as the opposition's candidate, Muhammadu Buhari has not shown up to debates with President Jonathan despite doing so at previous elections, according to Nigerian news website This Day Live.

The opposition's All Progressives Congress' (APC) contender is Muhammadu Buhari, a Muslim from northern Nigeria, while the ruling People's Democratic Party's (PDP) President Goodluck Jonathan is a Christian from the south.

© AP Photo / Jossy Ola, File
Boko Haram Kills 15 Ahead of Jonathan Campaign Rally
In addition, International Criminal Court (ICC) announced on Monday that Nigerian politicians must not provoke violence as the February 14 general election is less than two weeks away.

"Any person who incites or engages in acts of violence including by ordering, requesting, encouraging … crimes within ICC’s jurisdiction is liable to prosecution," an ICC official told Reuters.

The agency reports that rhetoric has also been heating up as a governor belonging to the ruling PDP urged his supporters to crush APC "cockroaches." In addition, the APC announced that it would set up a parallel government if it decides that the election is not fair.

© AFP 2021 / ALI KAYA
Chad, Cameroon Launch Strike on Boko Haram in Nigerian Border Town
Meanwhile, two Chadian Su-25 jets and one Mi-24 attack helicopter pounded Boko Haram positions in Gamboru, on Nigeria's border with Cameroon, according to AFP. Chad has about 2,000 soldiers deployed at Fokotol, across the border from Gamboru, where they are preparing a joint offensive against Boko Haram together with Cameroonian forces, according to the agency.

"Through these bombings, we seek to neutralize the enemy, and pave the way to the liberation of Gamboru" through a land operation, a Chadian officer told AFP on Sunday.

© AFP 2021 / TUNJI OMIRIN
Boko Haram Onslaught Continues, Despite Army Resistance
Boko Haram is a militant group, which aims at establishing an Islamic state in northern Nigeria. Large swathes of land in the Borno State, as well as in neighboring Adamawa and Yobe are believed to be under control of the Islamists. The Boko Haram insurgency has left over 13,000 people dead since 2009.