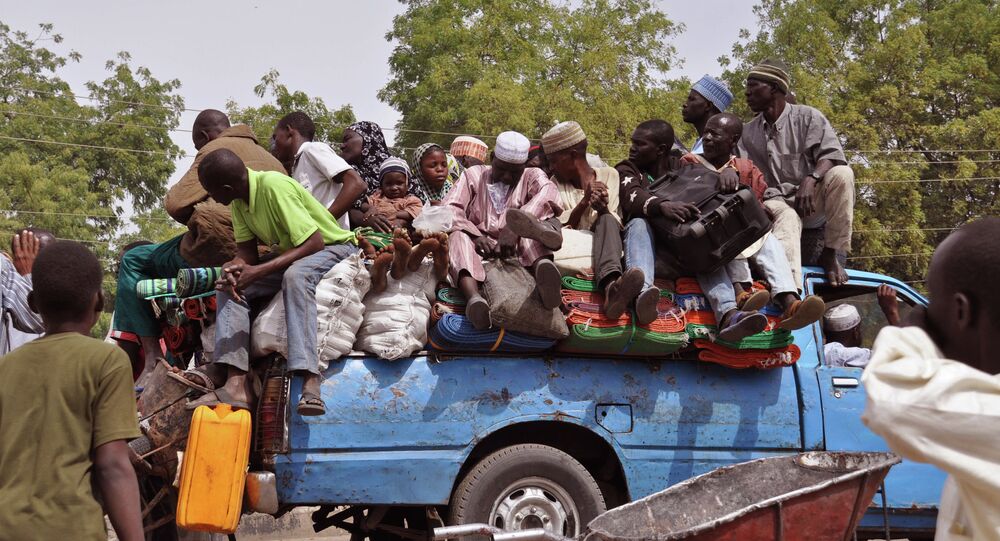 Repelled from Maiduguri and facing a growing challenge on Nigeria's eastern border with Cameroon, Boko Haram expands its attacks west as suicide bombers struck targets outside the conflict zone.

In Maiduguri, which is located in Nigeria's northwestern Borno state, the army together with local vigilantes repelled Boko Haram's attack, as defense officials boasted of a significant victory.

FLASH: Attack on Maiduguri successfully repelled. Many Terrorists were killed as we inflicted heavy casualties on them… /1 #COINUpdate

Armored vehicles, Artillery guns and many vehicles captured from terrorists in disarray as Military pursued them in #Borno and #Adamawa…/2

Life in the city returned to relative calm, according to a Nigerian daily, the Premium Times, although many civilians are said to have been killed in the crossfire. Boko Haram fighters previously attacked Maiduguri on February 25, but were driven back, although they were able to capture the town of Monguno to the north, as well as a military base.

© AFP 2021 / TUNJI OMIRIN
Boko Haram Launches New Deadly Attack on Key Nigeria City Maiduguri
Later in the day, two Mi-24 attack helicopters belonging to the Chadian army struck Boko Haram positions in Gamboru, on the Nigerian-Cameroonian border, AFP reported. The Chadian and Cameroonian armies are considered to be preparing a joint assault against the group in Fokotol, across the border from Gamboru.

"We are seeing more and more troops arrive in Fokotol. They are growing in size every day," a local resident told AFP.

The Chadian and Cameroonian forces which are also said to possess artillery, expanded their control of the area as an elite Cameroonian army battalion seized control of two cross-borer bridges, according to the agency.

© AP Photo / Jossy Ola, File
Boko Haram Blows Up Kidnapped Children in Savage New Tactic
A suicide bombing killed 10 people in the town of Potiskum, located in the west of Nigeria's Yobe state, where Boko Haram are also known to operate. According to Reuters, a suicide bomber blew himself up outside of the house of Sabo Garbu, a member of Nigeria's House of Representative. Garbu is a member of Goodluck Jonathan's ruling People's Democratic Party.

Five more people were killed by two blasts in the city of Gombe, the capital of Gombe state, which is also considered an area of Boko Haram's operations. Two people were killed at a marketplace by an explosion from an unknown source and moments later a suicide bomber on a motorcycle blew himself up outside a military checkpoint, killing one soldier and two civilians, AFP reported.

© REUTERS / Yves Herman
EU Deploys Mission in Nigeria to Observe General Election
Nigeria is only two weeks away from its national elections, which are scheduled for February 14, and are considered too close to call, according to Reuters. Despite the violence in the country's northeast, an opposition stronghold, election officials have insisted on holding the vote, although they admitted that voting will be impossible in the northeast, AFP reported.

© AFP 2021 / TUNJI OMIRIN
Boko Haram Onslaught Continues, Despite Army Resistance
In October 2014, the leaders of Niger, Nigeria, Chad and Cameroon announced plans to step up the fight against Boko Haram with an additional battalion and a command center to tackle the group, and Chad began its operation in mid-January. Chad is considered impacted by this conflict not only because it is harmed by Boko Haram, but also because it faces a dire humanitarian situation as refugees flee to the country as Boko Haram's influence spreads in Nigeria.