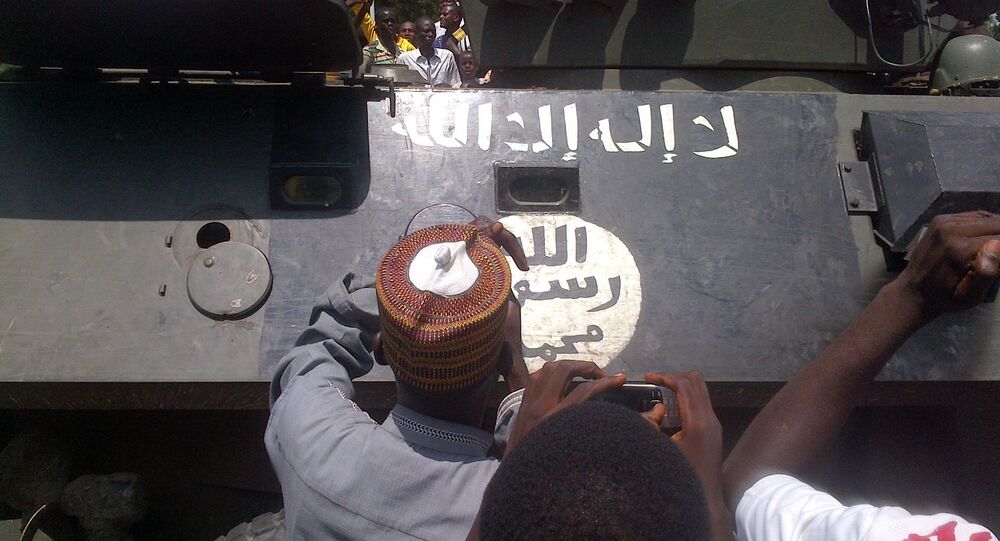 Boko Haram fighters were repelled from the state capital after a fierce battle in which scores were killed on both sides.

© AP Photo / Sunday Alamba, File
Residents Flee in Panic as Boko Haram Attacks Key Nigerian City
MOSCOW, January 25 (Sputnik) — Boko Haram was able to seize the town of Monguno, to the north, although the offensive on Maiduguri was beaten back according to a Nigerian daily, the Premium Times.

Boko Haram fighters were repelled from the city of Maiduguri following a battle with the Nigerian army in which scores were killed on both sides, a security official told Reuters.

Earlier in the day, all roads were closed and commercial activity was shut down, a security official told Reuters. AFP has reported that along with the military, residents and vigilantes are fighting back against Boko Haram fighters.

© AP Photo / Jossy Ola, File
Boko Haram Kills 15 Ahead of Jonathan Campaign Rally
Boko Haram began the offensive with an attack against the town of Njimtilo, about 20 kilometers from Maiduguri, according to a Nigerian daily, the Premium Times. Residents of nearby housing estates are fleeing their homes and heading to the downtown area, according to the publication.

The attack came after Saturday's Boko Haram attack on a village near Maiduguri. Later that day, President Goodluck Jonathan gave an election campaign speech in Maiduguri, promising to end Boko Haram violence. The opposition candidate, Muhammadu Buhari, was scheduled to arrive for a campaign stop in the city on Monday.

© AFP 2020 / PIUS UTOMI EKPEI
Hundreds Flee Nigeria's Baga Region Threatened by Boko Haram
The Nigerian army launched an operation against the group in 2013, but the effort has stalled, although a national security advisor told BBC the country doesn't believe that there is a need for help from UN or African Union troops.

On January 4, Boko Haram militants captured the town of Baga in Borno State, reportedly killing hundreds. "The human carnage perpetrated by Boko Haram terrorists in Baga was enormous," Muhammad Abba Gava, a spokesman for a local defense group that fights militants, told the Associated Press. Reports emerged that approximately 2,000 people, mostly women, children and the elderly, were killed, according to Amnesty International. Nigerian military said that the assault on Baga left 150 people dead, according