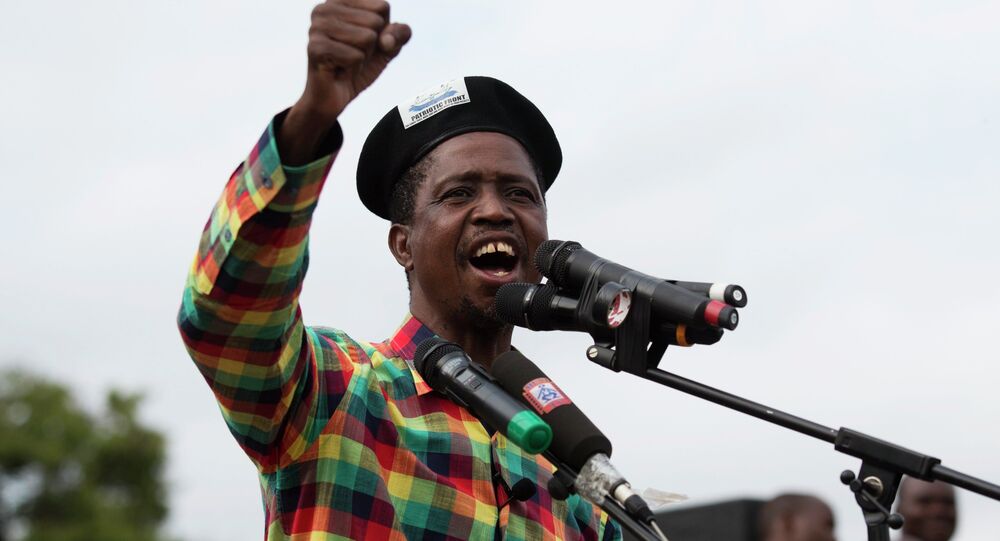 Lungu, Defense and Justice Minister and candidate for the country's ruling Patriotic Front, defeated rival Hakainde Hichilema of the United Party for National Development, garnering 48.33 percent of the vote, compared to Hichilema's 46.67 percent, with an estimated 32 percent turnout.

Police were reported to have used tear gas to clear frenzied Lungu supporters and opponents in Lusaka as celebrations and protests got out of hand.

The Patriotic Front's secretary congratulated Lungu on his victory, while Hichilema denounced the vote, which stretched three days from Tuesday to Thursday, as a sham.
AFP notes that Lungu, 58, was relatively unknown in the country prior to former president Michael Sata's death in London last October. The former minister, who has described himself as an "ordinary Zambian of humble beginnings," earlier defeated rivals in a power struggle to become the Patriotic Front's candidate. Lungu told AFP in a recent interview that he sought "to form a government which will be very inclusive," including opposition politicians.

Zambia to Have First White Leader Since Colonial Rule: Reports
Lungu, who will serve out the remainder of Sata's term, will face elections again in 2016. He promised political stability and a continuation of President Sata's course. This includes efforts at fighting unemployment, poverty and corruption, as well as a contentious mining tax opposed by foreign mining companies in the copper-rich country.
Hichilema, a businessman running for the presidency for a third time, condemned "widespread violence" against his supporters and party members, "as well as deep irregularities in the counting process." He has demanded that the election commission verifies the results in the presence of members of his party and that of the Patriotic Front. He noted that this "election was stolen and does not reflect the will of the people." Zambia's electoral commission has dismissed the charges, AP notes.

Acting President Guy Scott, Africa's first white president in 20 years, will step down Sunday when Lungu is sworn in. The country's constitution prevented Scott from standing for the presidency, as his parents were born outside Zambia.

Massive Rescue Operation Ongoing in Malawi After Flooding Kills Over 176

Zambia to Have First White Leader Since Colonial Rule: Reports