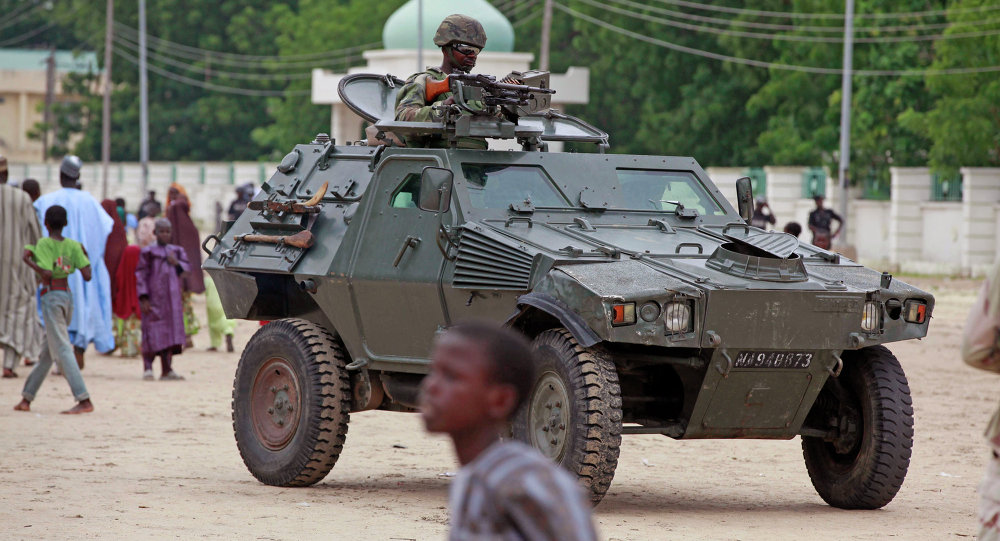 Boko Haram militants have launched a major offensive on Maiduguri, the capital of Nigeria's Borno State, as the Nigerian military scrambles jets to respond.

MOSCOW, January 25 (Sputnik) —Boko Haram militants began an offensive against the city of Maiduguri after midnight on Sunday, according to Reuters.

FLASH: Troops are repelling a simultaneous attack on #Monguno and #Maiduguri by Terrorists.Coordinated Air and Land OPs being conducted #Now

All roads have been closed and commercial activity was shut down, a security official told Reuters. AFP has reported that along with the military, residents and vigilantes are fighting back against Boko Haram fighters.

Boko Haram began the offensive with an attack against the town of Njimtilo, about 20 kilometers from Maiduguri, according to a Nigerian daily, the Premium Times. Residents of nearby housing estates are fleeing their homes and heading to the downtown area, according to the publication.

© AP Photo / Jossy Ola, File
Boko Haram Kills 15 Ahead of Jonathan Campaign Rally
The attack comes after Saturday's Boko Haram attack on a village near Maiduguri. Later that day, President Goodluck Jonathan gave an election campaign speech in Maiduguri, promising to end Boko Haram violence. The opposition candidate, Muhammadu Buhari, was scheduled to arrive for a campaign stop in the city on Monday.

© AFP 2019 / PIUS UTOMI EKPEI
Hundreds Flee Nigeria's Baga Region Threatened by Boko Haram
The Nigerian army launched an operation against the group in 2013, but the effort has stalled, although a national security advisor told BBC the country doesn't believe that there is a need for help from UN or African Union troops.