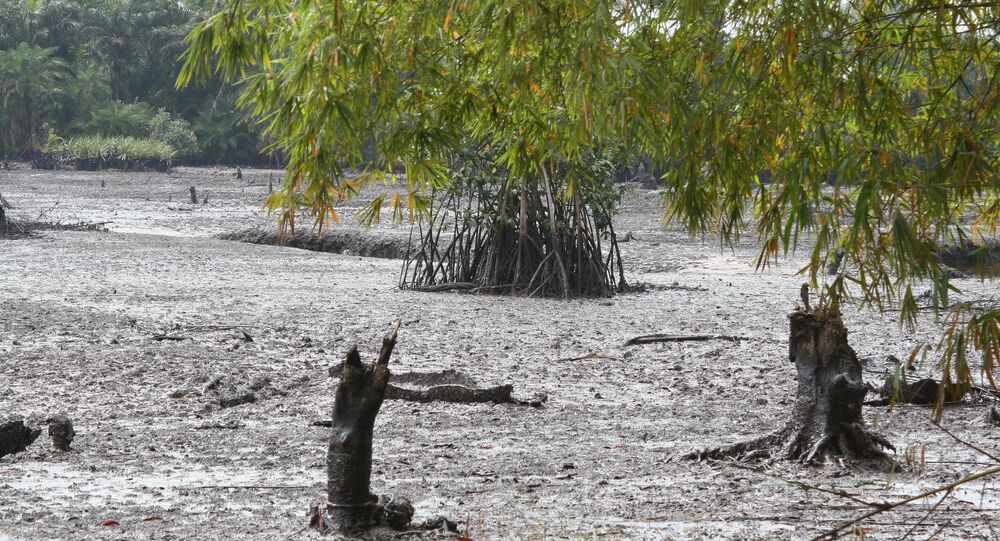 The Nigerian Bodo community will get 55 million pounds (approximately $83 million) from Shell in compensation for its oil spills in the Niger Delta in 2008; the decision is welcomed by various human rights groups and environmentalists.

© AP Photo / Sunday Alamba
Shell Makes Bogus Claims on Nigeria Oil Spills: Amnesty International
MOSCOW, January 7 (Sputnik) – Amnesty International and the Centre for Human Rights and Development (CEHRD) has welcomed an offer by oil giant Shell to pay the Nigerian Bodo community 55 million pounds ($83 million) in compensation for its oil spills in the Niger Delta in 2008, according to a statement issued by Amnesty on Wednesday.

On Wednesday, Shell agreed to make an out-of-court settlement of 35 million pounds to 15,600 fishermen and 20 million pounds to the Bodo community for the environmental damage caused by the oil spills, according to the statement.

"While the pay-out is a long awaited victory for the thousands of people who lost their livelihoods in Bodo, it shouldn't have taken six years to get anything close to fair compensation," Amnesty global issues director Audrey Gaughran said in a statement.

Amnesty International and CEHRD have been supporting Nigeria on the spills case since 2008, but court proceedings against the Shell Petroleum Development Company of Nigeria only began in 2011.

"The compensation is a step towards justice for the people of Bodo, but justice will be fully achieved when Shell properly cleans up the heavily polluted creeks and swamps so that those who rely on fishing and farming for their income can begin to rebuild their livelihoods," Styvn Obodoekwe of CEHRD said.

Shell has accepted responsibility for the oil spills occurred in the Niger Delta in August and December 2008 but seriously underestimated the volume of oil split. During three-year long legal battle, the company revealed that some of its pipelines were old, contained "major risk and hazard" and needed to be replaced. According to Amnesty, the company did not act on this knowledge to prevent the oil leaks.

Environmental restoration of the area where the oil spills occurred is possible but may take 25 to 30 years, according to the United Nations Environment Program.