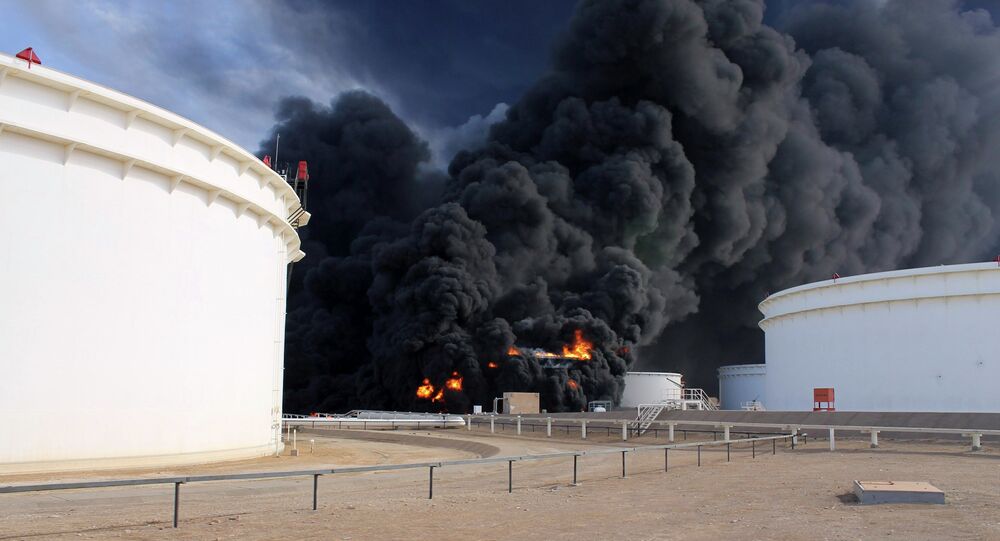 A fire that raged in Libya’s main oil terminal of al-Sidra for over a week has reportedly been extinguished.

© REUTERS / Stringer
Libya Partly Puts Out Oil Tank Blaze as Oil Prices Slowly Rebound
"The fires have been extinguished in all seven tanks that were ablaze after raging out of control for nine days," said Ali al-Hassi, a security spokesman for the so-called "oil crescent" region in eastern Libya.

The information was confirmed by an independent Libyan Solidarity Press Agency, citing a local firefighter. "We can say that the extinguishing operation and fire control have been successfully completed," the agency said, as quoted by DPA.

A week ago, several oil tanks caught fire after a rocket hit the al-Sidra oil terminal. It was launched by Fajr Libya (Libya Dawn), an Islamist group, affiliated with the self-declared government of Omar Hassi. Militants, who control parts of Tripoli, Benghazi and Misrata, have tried to seize al-Sidra, the main oil terminal in the country.

Libya’s "oil crescent" region has been at the center of fighting between the forces of the internationally recognized government of Abdullah al-Thani and Fajr Libya. As a result, oil production in the area has fallen from approximately 900,000 barrels a day in October 2014 to 350,000, according to the Financial Times.

© Sputnik / Andrei Stenin
UN Urges All Sides in Libyan Conflict to Cease Fighting
Earlier, on Friday, a firefighting official told Reuters that they "managed to extinguish all but one tank storage. Tomorrow we hope to finish the job."

On Monday, the Libyan government approved a deal, worth $6 million, with a US company to fight the fire at the oil terminal. "At least that money has been now saved since we managed to put out the fires locally," said Hassi, as quoted by AFP.

Three years after Muammar Gaddafi was overthrown, Libya remains torn between rivaling militias, governments and parliaments, with no easy exit in sight.