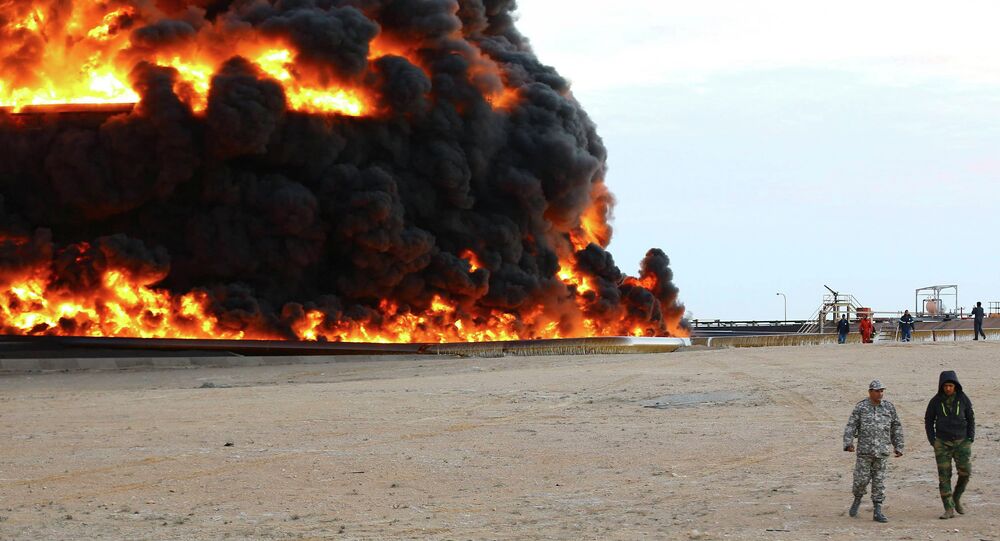 Fires have reportedly been extinguished at three of five oil tanks in Libya’s largest crude oil port; all five were set ablaze amid a rocket attack by Islamist militants and the country is calling for international help putting out the flames.

The country has appealed for international help to prevent six million barrels of crude from spilling into the Mediterranean Sea.

The five oil tanks in the port were set ablaze last week as the result of a rocket attack by Islamist militants. The rocket was fired by Islamist fighters from the group Fajr Libya (Libya Dawn).

© REUTERS / Stringer
UN Support Mission in Libya Urges to Stop Attacks on Libya's Oil Depots
Oil has advanced for the first time in three days; Brent crude was up 48 cents at $59.93 by 0530 GMT after hitting $60.40 earlier in the day, according to Reuters. The benchmark had slid 79 cents in the previous session.

The agency says that Daniel Ang, an analyst with Singapore's Phillip Futures, expects Brent to remain at around $60 and US crude to trade between $55 and $56 this week.

This is partly due to speculation that the conflict in Libya will help ease a global supply surplus that has prompted a prolonged fall in crude oil prices.

The fire has destroyed 800,000 barrels of crude — more than two days of the country's output, Reuters quotes Libyan officials as saying.

"Libya, and all the other problems, warrants some kind of risk premium," the agency quotes Jonathan Barratt, chief investment officer at Sydney's Ayers Alliance, as saying. "Oil is at a level where people are happy to build in a risk premium."

This year, oil prices have fallen by almost 50 percent, with the Organization of Petroleum Exporting Countries (OPEC) refusing to cut production and the United States seeing its highest energy output in 30 years because of a shale boom.

In November, OPEC, which accounts for some 40 percent of the world’s oil output, decided not to cut production despite a sharp decline in oil prices in recent months.

A drop in oil prices can have knock-on effects on the economy, as oil exporting countries such as Russia and Venezuela are currently experiencing.

HRW Calls to Stop Forcible Return of Civilians to Libya