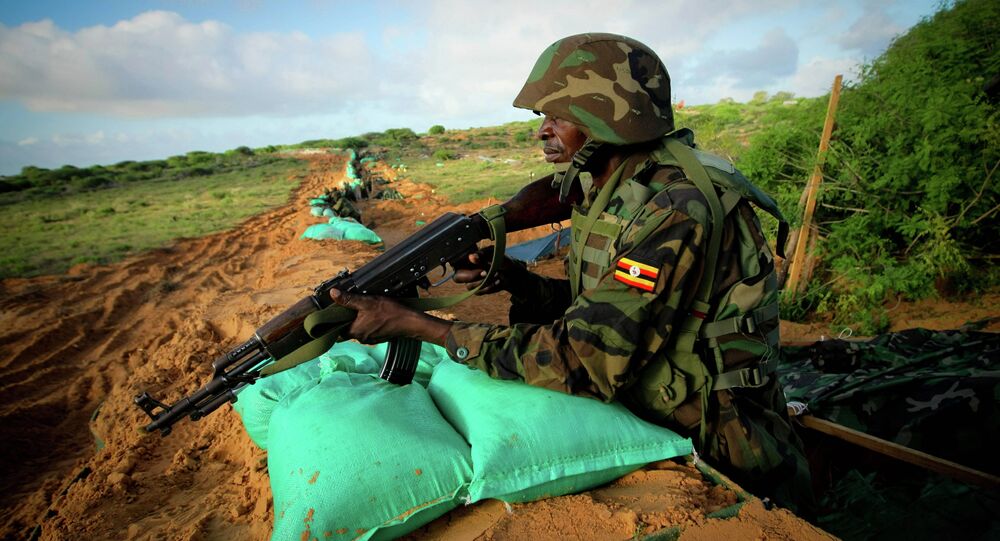 Three African Union (AU) soldiers, a civilian contractor and five al-Shabab militants were killed during a militant attack on the main AU base in Mogadishu, Somalia. The Islamists launched the attack during a Christmas day lunch hour on December 25.

MOSCOW, December 26 (Sputnik) – Five militants were killed and three captured during an al-Shabab attack on the key base of the African Union Mission in Somalia (AMISOM) located in the capital of Mogadishu, AMISOM said in a statement.

© AP Photo / Mohamed Sheikh Nor
Four Killed in Attack on African Union's Peacekeepers Base in Somalia
"Our forces shot dead three of them, two detonated themselves near a fuel depot," Col. Ali Aden Houmed said, as quoted by the Associated Press. "An investigation is underway on how they entered the base," he added.

Three AMISOM soldiers and a civilian were killed in the fighting.

At least eight al-Shabab militants, some of whom were wearing uniforms of the Somali National Army, launched the attack during a Christmas day lunch hour, according to the New York Times. The Islamists were allegedly targeting a Christmas party at the Halane base, the media outlet said.
The African Union condemned the attack.

After the attack, AMISOM tweeted that the base was safe and under control of the African Union (AU) force.

AMISOM base is safe & under control. The AMISOM soldiers are commended for their gallant effort in controlling the situation. #AMISOM

Maman S. Sidikou, head of AMISOM, praised troops for their actions and expressed his condolences to the families of those who were killed.

He added that their lives were not lost in vain and "will be etched in Somali history."

While we mourn, may they rest assured that their sacrifices will be etched in Somali history @amisomsomalia #Somalia

© Flickr / United Nations Photo
Al-Shabab Militants Attack Key African Union Military Base in Somalia
The AMISOM headquarters are located in Halane military base at the Mogadishu airport. Several other international organizations, including the UN, use the compound. The airport also houses the embassies of Great Britain and Italy, according to Reuters.

AMISOM forces were deployed to Somalia in 2007. Approximately 22,000 soldiers are involved in a campaign to fight al-Shabab in the country, which is partially under control of the militants.

Al-Shabab Is a Major Threat to Security in Somalia