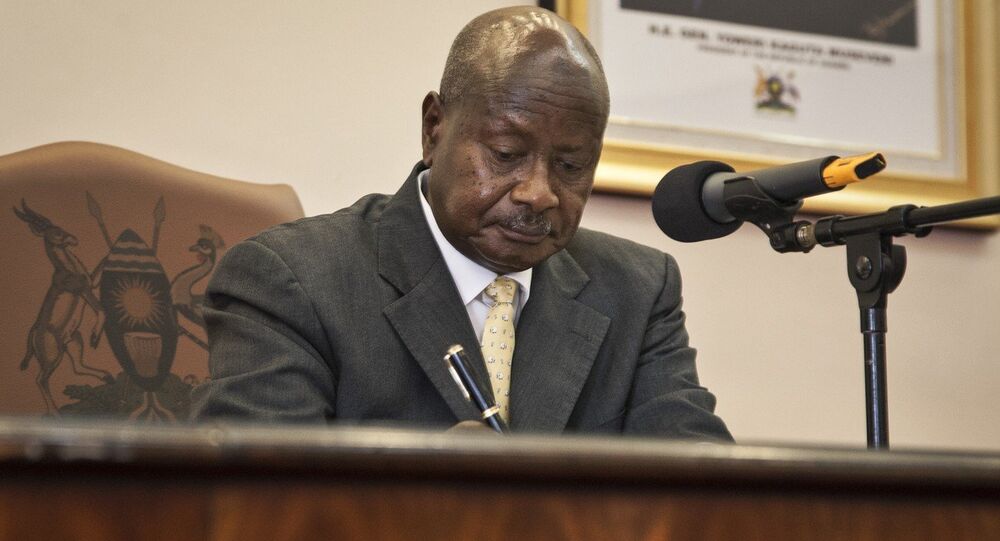 African politician claims that the ICC is used as a tool by Europeans to assert hegemony.

According to Reuters, Museveni told a Kenyan audience, speaking in Swahili, "I will bring a motion to the African Union’s next session. I want all of us to get out of that court of the West. Let them [Westerners] stay with their court."

The Ugandan leader was speaking in Kenya at a ceremony marking the 51st anniversary of the country's independence from British rule, attended by the Kenyan President Uhuru Kenyatta. In 2012, the ICC charged Kenyatta with five counts of crimes against humanity which he allegedly committed during 2008 post-election violence in Kenya. On December 5 the ICC announced the charges were dropped due to lack of evidence.

Reuters reports that Kenyatta declared at the ceremony, "I ask you all to join me in supporting my deputy and his co-accused, as they also await their overdue vindication." Kenyan Deputy President William Ruto and another man, radio presenter Joshua Arap Sang, are still facing charges at The Hague. All three men were summoned to appear before the court in 2011, and charges followed in 2012.

Amnesty International Slams Uganda for Discriminatory Legislation
The ICC in its statement complained of non-cooperation from the Kenyan government with the prosecution's investigations into the case against Kenyatta, saying that "this failure has reached the threshold of non-compliance," with the Rome Statute, the treaty upon which the ICC was established.

"Cunningly, they are putting Deputy President Ruto, someone who has been elected by Kenyans, in front of the court there in Europe," said Museveni. "They have turned it into a vessel for oppressing Africa again so I’m done with that court. I won’t work with them again," he declared.

The African Union is next set to meet in January in Addis Ababa for its 20th ordinary session. In October 2013 it held an extraordinary session with the framework "Africa’s relationship with the International Criminal Court." The assembly requested the deferment of indictments against the Kenyan President and Vice President, and also the arrest warrant issued in 2009 for Sudanese President Omar al-Bashir for alleged war crimes perpetrated during the conflict in Darfur, which began in 2003.

The assembly also declared that no serving AU head of state should be required to appear before the ICC, and that the AU is in the process of expanding its Court of Justice and Human Rights to try international crimes such as genocide, crimes against humanity and war crimes in Africa.

UN Chief Slams Deadly Attack on Mine in Kenya, Calls for Justice