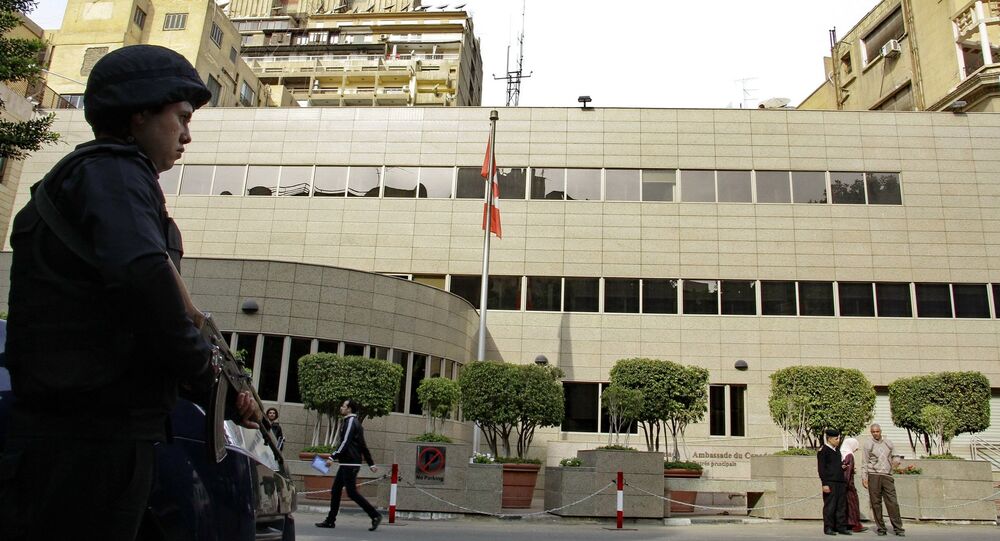 Foreign embassy staff thought to be under threat of attacks from militants.

© REUTERS / Mohamed Abd El Ghany
Six Killed, 26 Wounded During Unrest in Egypt
MOSCOW, December 8 (Sputnik) – Canada closed its Cairo embassy on Monday due to security fears, becoming the second diplomatic mission in the Egyptian capital to do so in as many days.

"As a security precaution, and to ensure the protection of Canadian staff, we have closed our embassy in Cairo for the day," Adam Hodge, press secretary to Foreign Affairs Minister John Baird, told the Canadian Globe and Mail. “We take the safety of our personnel and our mission overseas very seriously. We are monitoring events closely and taking appropriate security measures."

Canadian officials would not detail reasons for the closure, but a security source told Reuters that Egyptian authorities have recently caught a suspected militant who divulged plans to target foreign embassies. The closure follows the British decision on Sunday to shut its mission. According to a statement on its website, "Public services at the British Embassy are currently suspended. We have taken this decision to ensure the security of the Embassy and our staff."

© REUTERS / Philippe Wojazer
Egypt’s Al-Sisi Openly Blames West for Libya’s Tragic Predicament
Reuters reported a US spokesman saying that the US Embassy in Cairo was open as usual, but that it had released a statement on December 4 cautioning staff not to go too far from their homes. On December 6, the Australian Embassy issued travel advice informing travelers that "reports of early December 2014 indicate that terrorists may be planning attacks against tourist sites, government ministries and embassies in Cairo."

The advice also warned citizens to reconsider travelling in Egypt, and advised particularly against travel to the Governorate of North Sinai. The British Embassy is also currently warning against travel to North Sinai, as well as other areas including parts of South Sinai and within 50km of the border with Libya.

Egyptian security forces have faced insurgency from militant Islamists in the Sinai Peninsula since the 2011 uprising which forced President Hosni Mubarak from power after a 30-year rule. After his successor, Mohammed Morsi of the Muslim Brotherhood was ousted in 2013, the attacks increased in intensity, mostly targeting Egyptian government security forces.