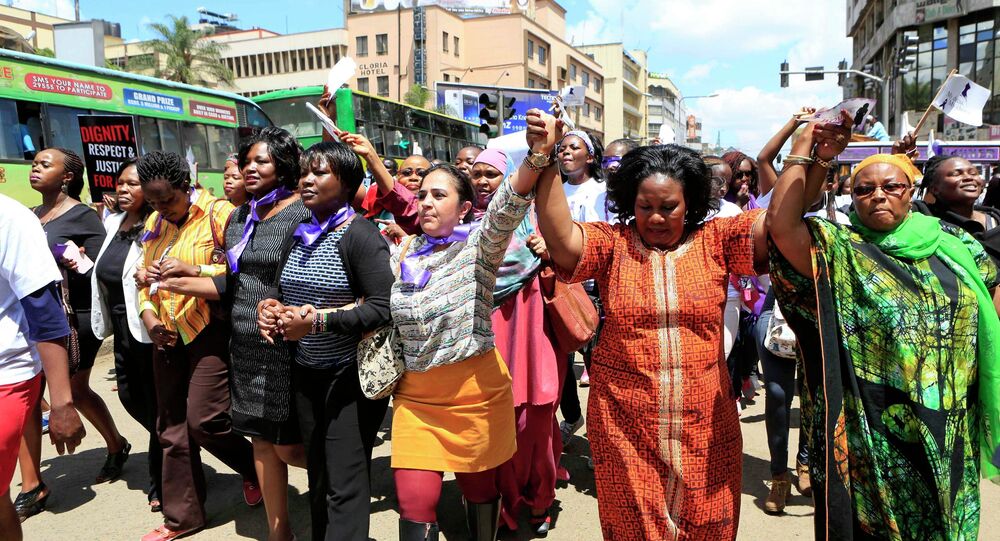 Protesters marched on the streets of Nairobi in support of a woman, who was attacked and stripped by a group of men last week.

MOSCOW, November 17 (Sputnik) – A group of protesters have gathered in Nairobi, following an incident during which a woman was attacked and stripped by a crowd, Aljazeera reported.

The incident occurred last week, when a crowd of men assaulted a woman near a bus stop, accusing her of “tempting” them because of the way she was dressed, according to Aljazeera.

“They stripped her not only of her clothes, but of her dignity and person,” said Zipporah Kittony, member of the Kenyan Senate Committee on Health, as quoted by the Kenyan Daily Nation. “This act is a national shame and we condemn it in the strongest possible terms”.

As a response to the incident, protesters gathered at Uhuru Park in Nairobi this morning. Some held banners “My dress, My choice”, while others wore miniskirts in solidarity with the attacked woman. The protesters walked toward the bus station where the woman was assaulted, Aljazeera said

“We do not want to live in a primitive world where people do not respect the rights of others, especially the rights of children and women,” Ruto said last week, as quoted by the Daily Nation.

Although the investigation has been launched, the police said they could not take the case further, because the woman had not filed an official complaint, according to Aljazeera.

Less than 2h before #MyDressMyChoice in Uhuru Park! Get your purple/white on & show #Kenya that #women are not defined by what they wear!

The incident has attracted a wide public support on social media, with #MydressMychoice and #strippingshame trending on Twitter.

The public uproar in Kenya comes amid two more cases in which women have been sexually violated, Aljazeera said.