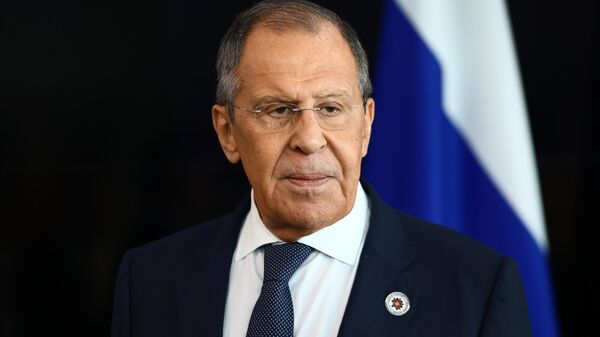 Subscribe
International
India
Africa
The minister addressed the key events of last year, including the special military operation in Ukraine, deglobalization, anti-Russian sanctions and Moscow's turn to the East in the wake of growing trade with Asian countries.
Russian Foreign Minister Sergey Lavrov held a press conference to discuss the results of Russian diplomacy in 2022.
Last year, the special military operation in Ukraine became the focus of Russian foreign policy. When Russia kicked off the operation to protect the people of Donbass from Ukrainian aggression in February 2022, Western countries ramped up military and financial aid to Kiev and imposed numerous sanctions against Moscow.
The sanctions disrupted global supply chains, leading to an energy crisis in Europe, while Western support for Ukraine provoked major security challenges in the region.
Follow Sputnik's live feed to find out more!
Table of contents
New firstOld first
11:03 GMT 18.01.2023
Lavrov on South African Foreign Ministry's Stance on Anti-Russia Sanctions: Not Every African Country is Able to Make Its Position So Clear
11:01 GMT 18.01.2023
Lavrov Confident Lachin Corridor Issue Will Be Solved Soon
The foreign minister also called for an open presentation of any complexities and concerns in the Nagorno-Karabakh issue.
10:38 GMT 18.01.2023
Donetsk and Lugansk Refused to Submit to Authorities That Killed Civilians in Donbass, Lavrov Stresses
10:33 GMT 18.01.2023
Lavrov: US Supported Bloody Coup d'Etat in Kiev in 2014, Prompting Putchist Government to Wage War Against Its Own Nation
10:25 GMT 18.01.2023
Moscow Enjoys Good Relations With Latin America and Caribbean, Almost All Countries Reject Anti-Russian Sanctions, Lavrov Says
10:16 GMT 18.01.2023
Unlike the West, Russia Never Bans Its Partners From Interacting With Other Nations - Russian FM
Russia never bans its partners from communicating with other countries, unlike the West, which called on Russia's Central Asian partners to support the Western side in the Ukrainian issue, under the threat of losing the market and investments, Lavrov said.
10:15 GMT 18.01.2023
Lavrov: Shift of Rome to Anti-Russian Rhetoric Caused by Confrontational EU Policies, Not the Will of the Italian People
09:59 GMT 18.01.2023
Lavrov: West Seeks to Impose Bloc Mentality on Asia, Drive Wedge Between China and India
The West's Indo-Pacific strategies to drive wedges between India and China are obvious enough, Lavrov said. The creation of AUKUS with the incidental humiliation of France, the policy of expanding the bloc format, including with Japan, New Zealand, and Korea, occurs at the expense of undermining those structures that have shaped the security architecture in Asia for decades, primarily ASEAN, Lavrov added.
09:51 GMT 18.01.2023
Europe's Transition to LNG Means Increase in Cost of Production in the Long Run, Lavrov Says
Europe's industry is moving to the US, with Western political analysts saying that one of the goals of what is happening around Ukraine is to sharply reduce the competitiveness of Europe, and then China, Lavrov stated.
09:48 GMT 18.01.2023
Lavrov: Russia-China Relations 'Best in History'
The Russian foreign minister noted that Beijing and Moscow are engaged in both pragmatic and friendly relations. Russia and China significantly boosted their trade and cooperation in various spheres and are integrating in various international organizations.
Lavrov stressed that the US considers China's rise "a challenge" to its dominance and is trying to contain both Russia and China. As such, Washington is forcing other western countries to isolate them, in addition to trying to create a rift between Moscow and Beijing. However, according to him, these schemes are "completely divorced from reality".
09:43 GMT 18.01.2023
Naryshkin-Burns Meeting Last November Was Held at Biden's Request to Putin - Lavrov
The meeting between CIA Director William Burns and Sergey Naryshkin, the head of Russia's Foreign Intelligence Service, in Ankara last November was held at the request of US President Joe Biden to Vladimir Putin, Lavrov has revealed.
09:41 GMT 18.01.2023
Lavrov on West's Desire to Create UN Tribunal on Ukraine: 'US and Ukraine Need Another Tribune'
"Whatever the child is amused with," Lavrov said, adding, "Ukraine and the United States do not need a tribunal, but another tribune."
No one thought about any tribunals when the US invaded Syria and began to level Syrian cities like Raqqa. When the International Criminal Court decided to look into US crimes in Afghanistan, the US threatened it with sanctions, Lavrov said.
09:18 GMT 18.01.2023
No Arab Countries Joined Anti-Russia Sanctions Despite Unprecedented Western Pressure - Lavrov
"No Arab countries have joined the sanctions, despite the unprecedented and most severe pressure from the West. I would even say, the unceremonious and self-humiliating pressure that the West is exerting," Lavrov said.

Lavrov said that three days before his speech in Cairo in July 2022, a delegation of Western diplomats approached the Secretary General of the League of Arab States, demanding that the Russian foreign minister's speech be canceled, or Russia be publicly condemned. They also demanded that no one in the Arab League be photographed with the Russian foreign minister. The Arab League, however, rejected those demands.
09:16 GMT 18.01.2023
Lavrov: Arab World Understands Russia's Position, Which is Fighting for New World Order
09:08 GMT 18.01.2023
Relevant Military and Technical Measures Will be Taken on Russian Border if Sweden and Finland End Up Joining NATO - Lavrov
09:06 GMT 18.01.2023
US Pressures Georgia to Join Anti-Russia Sanctions, Lavrov Says
08:53 GMT 18.01.2023
Lavrov: Kiev Pledged to Nazi Ideas, Was Engaged in 'Inadmissible Humiliation' of Russian People
Russia hoped that Europe would understand the impossibility of "deceiving all the time" and breaking promises, including on NATO's expansion to the east, Lavrov said.
"I gave an example of the first Ukrainian Maidan, 2004, when Europe said [that] Ukraine should choose whether [they will stick] with Europe or with Russia. This was three years before the Munich speech [by Russian President Vladimir Putin]. Even then we hoped that reason will prevail and Europe will understand that it is impossible to constantly deceive, it is impossible to constantly expand NATO to the east contrary to the promises that had been made," he said.
08:51 GMT 18.01.2023
Lavrov: Ukraine Was Being Turned Into a Bridgehead to Undermine Russia's Interests in Sea of Azov
08:35 GMT 18.01.2023
Lavrov: There Can be No Negotiations With Zelensky Because He Legally Prohibited Talks With Russia
"There can be no negotiations with Zelensky, simply because he has legally banned talks with the Russian government," Lavrov said during the Q&A session of his press conference.
The Russian foreign minister added that the Ukrainian president makes unrealistic proposals on peace settlement.
"Zelensky is putting forward some completely absurd initiatives, a 10-point plan, where everything is piled up: food security, energy security, biological security, the withdrawal of Russian troops from everywhere, repentance of the Russian Federation, a tribunal, conviction, and so on," he explained.
Russia is ready to consider serious proposals from the West for negotiations on the Ukrainian issue, but so far there have been none, Lavrov explained.
"All this Western chatter about them being ready [for negotiations], while Russia allegedly being not ready comes from the evil one. You asked about the prospects for negotiations between Russia and the West on the Ukrainian issue, we will be ready for any serious proposals, but we do not see serious proposals yet. We will be ready to consider them and make a decision," Lavrov told a journalists at the press conference.
08:31 GMT 18.01.2023
Lavrov: Goals of Special Military Operation Defined by Interests of Russia and Its Neighbors
Answering the first question in the Q&A session, the Russian foreign minister stressed that the goals of the Russian special military operation are not made up, they are defined by interests of Russia and its neighbors.
Ukraine shouldn't have military infrastructure that threatens Russia, and there should be no discrimination, persecution of Russians who are Ukrainian citizens but want to maintain their culture and language, Lavrov said.
Newsfeed
0
Access to the chat has been blocked for violating the rules . You will be able to participate again through:∞. If you do not agree with the blocking, please use the feedback form
The discussion is closed. You can participate in the discussion within 24 hours after the publication of the article.
To participate in the discussion
log in or register
loader
Chats
Заголовок открываемого материала