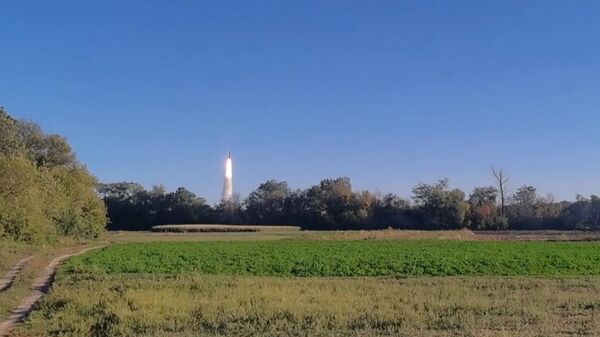 The strikes are carried out on power, defense industry, military command and communications facilities across Ukraine. Since then, air raid alerts have been issued in Ukrainian regions every day, sometimes throughout the country.
After the strikes on November 15, Ukrainian Prime Minister Denis Shmygal said that almost half of the country's energy system had been put out of service.
Follow Sputnik's Live Feed to Find Out More!
Table of contents
New firstOld first
03:32 GMT 06.12.2022
Blinken: Russia-Ukraine Conflict Will End With Diplomacy, Negotiation
The conflict between Russian and Ukraine will end with diplomacy and negotiation but it must be a durable and just peace, Secretary of State Antony Blinken said during an interview.

"At some point, this will end, and it will end almost certainly with diplomacy, with negotiation. But what I think we have to see is a just and durable peace, not a phony peace," Blinken told The Wall Street Journal on Monday.

The statement came in response to a question he was asked about what would allow the potential for negotiations with Russia to take place.
02:47 GMT 06.12.2022
Explosions Heard in Nikopol & Dnepropetrovsk Region - Media
22:05 GMT 05.12.2022

Russia's Special Operation in Ukraine
‘We Haven’t Got This Figured Out Yet’, Pentagon Says of Ukraine Aid as US Runs Low on Arms to Send
14:55 GMT 05.12.2022
Putin Visits Crimean Bridge
14:54 GMT 05.12.2022
Ukraine Reportedly Seeks Info From IAEA on Alleged Zaporozhye Worker Abuses
Ukraine’s government has asked the UN nuclear regulator to share its information regarding alleged Russian human rights abuses of local staff at the Zaporozhye nuclear power plant (ZNPP), The Wall Street Journal reported on Monday.
A November 28 letter from Ukraine to the secretariat of the International Atomic Energy Agency asked for the "facts of abuse of the ZNPP personnel," referring to an article published earlier by the Journal alleging that Russia’s Federal Security Service "tortured" plant employees and contractors in "underground prisons" near the plant.
The IAEA has maintained a rotating set of two to four observers at the plant since September following months of negotiations. Several workers told the Journal that the observers are prioritizing nuclear safety rather than worker conditions.
An IAEA spokesperson responded to the newspaper by saying that the observers speak daily to management and staff. They are "having a potentially stabilizing influence at the site, even though the situation at the ZNPP remains fragile and dangerous," the official said.
13:18 GMT 05.12.2022
Russia's MoD Briefing on Progress of Special Military Operation in Ukraine
11:51 GMT 05.12.2022
Air Raid Alert Issued Throughout All of Ukraine
11:18 GMT 05.12.2022
Russian Missile Hits Steel Giant ArcelorMittal Plant in Ukraine's Krivoi Rog - Reports
A Russian missile hit the production site of Luxembourg-registered multinational steel giant ArcelorMittal in the city of Krivoi Rog in Ukraine's Dnepropetrovsk region on Monday, local media reported.

The ArcelorMittal Krivoi Rog is Ukraine's largest steel manufacturer of rebar and wire rod. At the end of November, the plant suspended operation due to power supply issues.
10:03 GMT 05.12.2022
Kremlin on Situation Around ZNPP: We Continue Contacts With IAEA, Main Thing is to Stop Ukrainian Shelling That Could Lead to Huge Risks
10:03 GMT 05.12.2022
West's Oil Price Cap Will Not Affect Russia's Special Operation in Ukraine - Kremlin
07:59 GMT 05.12.2022
EU Officials Discuss Preparation of 9th Sanctions Package Targeting Russia - Reports
The European Commission and EU countries officials discussed the preparation of the ninth package of sanctions against Russia, US media reported, citing diplomats.

The new sanctions list may include 180 positions, ranging from technology to financial and media sectors. Diplomats are confident that the agreement could be potentially reached ahead of the EU Foreign Affairs Council that will take place in Brussels on December 12.
07:55 GMT 05.12.2022
Air Raid Warnings Issued in Three Regions of Ukraine - Authorities
04:57 GMT 05.12.2022
Lithuania to Provide Kiev With 155mm Artillery Shells - Defense Minister
Lithuanian Defense Minister Arvydas Anusauskas says his country will transfer artillery shells of 155mm caliber to Ukraine.

On Saturday, Lithuania’s defense minister said that his country had repaired two more German self-propelled howitzers Panzerhaubitze 2000 (PzH 2000) and handed them over to Ukraine.

"Shelling was recorded from the side of the armed formations of Ukraine in the direction of: 03:49 [00:49 GMT on Monday] Tonenkoye village - city of Donetsk (Voroshylovskyi District) 10 rockets were fired from BM-21 ‘Grad’," the DPR mission said in a statement on Telegram.

A Sputnik correspondent reported that two buildings were on fire in Donetsk on Monday morning, following the attack. One of the buildings houses a funeral home. A church was also damaged during the shelling.