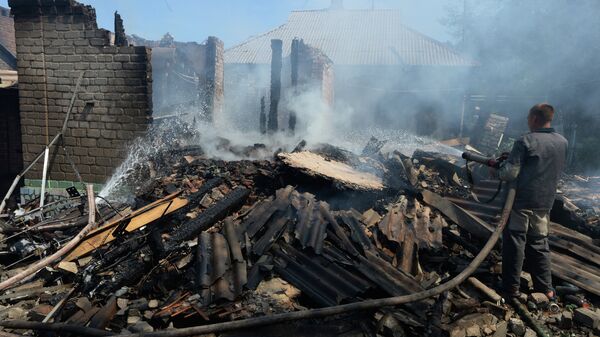 Being updated
Russia launched its special military operation in Ukraine in February, when the Donetsk and Lugansk People’s Republics asked for help in defending themselves against intensifying Ukrainian attacks. President Vladimir Putin stressed that the op aimed to stop the eight-year-long war being waged by Kiev against the people of Donbass.
Russian forces have been targeting Ukraine's military and energy infrastructure in high-precision strikes since October 10, two days after the terrorist attack on the Crimean Bridge, which, according to Moscow, was carried out by the Ukrainian special services.
According to Kiev, almost half of the country's energy system has not been operating due to missile strikes.
Follow Sputnik's Live Feed to Find Out More!
Table of contents
New firstOld first
14:33 GMT 24.11.2022
Russian MoD Says 50 Servicemen Returned From Ukrainian Captivity
Moscow-Kiev talks have resulted in the return of 50 Russian prisoners of war, the Russian Defense Ministry said on Thursday.

"On November 24, as a result of the negotiation process, 50 military personnel of the Russian armed forces were returned from Kiev-controlled territory, where they were in fatal danger," the ministry said.

The ministry also said that the released servicemen would be transported to Moscow by military aircraft of the Russian Air Force for treatment and rehabilitation in medical institutions of the Russian Ministry of Defense.

All released servicemen will be provided with the necessary medical and psychological assistance, the ministry added.
13:25 GMT 24.11.2022
EU Parliament Approves $18.7Bln Loan for Ukraine in 2023
The European Parliament approved on Thursday an 18 billion euro ($18.7 billion) conditional loan for Ukraine to cover essential public services and rehabilitation of infrastructure throughout next year.

"The 18 billion euros will cover roughly half of the estimated 3-4 billion euros monthly funding Ukraine needs in 2023. The money will go to supporting essential public services - such as running hospitals, schools, and providing housing for relocated people -, macroeconomic stability and the restoration of critical infrastructure destroyed by Russia, according to the Commission’s proposal," the EU legislature said in a statement.

The loan was approved by 507 votes in favor, 38 against and 26 abstentions. It will come with conditions for Ukraine, the European Parliament said.

"It requires reforms to strengthen the country’s institutions and prepare it both for reconstruction and its path towards EU membership," the statement read.

Self-HARM: US-Supplied Missile Injured Three in Ukrainian Apartment Block
11:05 GMT 24.11.2022
Russia Inflicted No Strikes at Kiev on Wednesday, Destruction Caused by Ukrainian Air Defense
The Russian Armed Forces did not strike within the boundaries of Kiev on Wednesday, all the destruction in the city was caused by the fallen missiles of air defense systems deployed in residential areas, the Russian Defense Ministry said.

According to the MoD, on November 23, a massive strike was inflicted the military command and control system of Ukraine and related energy facilities, all designated facilities were hit.

"Not a single strike was made on targets within the city of Kiev. All the destruction announced by the Kiev regime in the city was the result of the fall of missiles of foreign and Ukrainian air defense systems deployed in residential areas of the Ukrainian capital," the statement says.

"Of course," Ulyanov said when asked whether a direct call from the IAEA to the Ukrainian side to stop shelling the plant would contribute to some detente around the ZNPP.

Russia
FSB Foils Ukrainian Sabotage Attempt on South Stream Gas Pipeline
08:06 GMT 24.11.2022
US-Made Ukrainian Missile Went Astray, Injuring Civilians, Reports Suggests
According to American media, the incident occurred in September, when an AGM-88B High Speed Anti-Radiation Missile went astray in Kramatorsk, hitting an apartment building.
07:24 GMT 24.11.2022
Russian SU-35S Crews in Combat Action Amid Special Operation in Ukraine
04:56 GMT 24.11.2022
Russia Not Planning Hasty Measures Over Poland's Reaction to 'Missile Incident' - Moscow
Moscow is not planning to take hasty measures because of Warsaw's reaction to the "missile incident" but will take it into account in the future, the Russian Foreign Ministry has told Sputnik.
The ministry recalled that the Polish Foreign Ministry on November 15 "requested Russia's explanations" over the landing of missiles on Polish territory. The ministry added that the Russian Defense Ministry has provided exhaustive information about the non-involvement of the Russian Armed Forces in the "missile incident."

"We are not planning to take any hasty measures in this context, but we will take it into account in the general context of our relations with Poland," the ministry said.