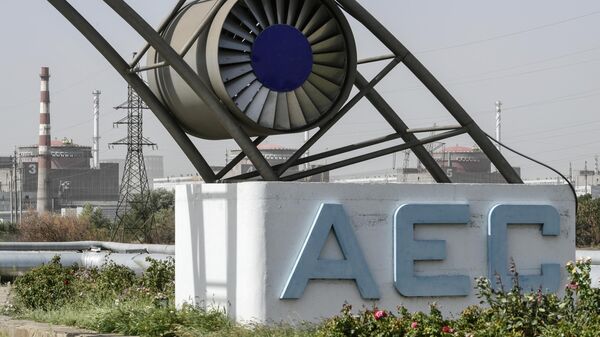 Subscribe
International
India
Africa
Being updated
Moscow launched strikes using precision-guided weapons against Ukraine two days after the terrorist attack on 8 October on the Crimean Bridge, which, Russia believes, was carried out by the Ukrainian special services. Since then, air raid alerts have been heard in the Ukrainian regions almost every day, sometimes throughout the country.
Ukrainian energy, defense, military and communications infrastructure have been targeted in retaliatory attacks by the Russian armed forces since 10 October. Russia's President Vladimir Putin said the Ukrainian attack on the Crimean bridge was meant to destroy Russian civilian infrastructure. According to him, Kiev has put itself in the same bracket as the most odious terrorist groups, and it is impossible to overlook the crimes of the Kiev regime any longer.
Follow Sputnik's live updates to learn more.
Table of contents
New firstOld first
18:15 GMT 03.11.2022
NATO's Stoltenberg Welcomes Grain Deal Revival
NATO Secretary General Jens Stoltenberg on Thursday welcomed that Russia resumed its participation in the Black Sea grain initiative and commended Turkey for mediating the deal revival.

Turkish President Recep Tayyip Erdogan said on Wednesday that after his talks with Russian President Vladimir Putin and talks between the Turkish and Russian defense ministers, an agreement had been reached on restoring the grain transport corridor in the Black Sea. The Russian Defense Ministry announced on Wednesday that Russia was resuming participation in the grain deal.

"I welcome the continuation of the UN grain agreement and Turkey’s effort to maintain this lifeline on which hundreds or millions of people around the world depend," Stoltenberg said during a joint press conference with Turkish Minster of Foreign Affairs Mevlut Cavusoglu.

Stoltenberg also commended Erdogan and Cavusoglu for their role in mediating the revival of the grain deal.

"I commend Turkey for what they have done. I also commend the president and the foreign minister for their latest efforts to ensure that after the suspension we saw in the weekend the grain deal is functioning and enforced again and also agree with the Foreign Minister Cavusoglu that it is important that the grain deal is renewed and extended," Stoltenberg added.

On Saturday, Russia suspended its participation in the UN-mediated grain deal after its ships were attacked by Ukraine in the Black Sea. On Wednesday, the Russian defense ministry said that Moscow was returning to the deal after receiving Ukrainian written guarantees on refraining from using the grain corridor for military purposes, following mediation by Turkey and the UN.

On July 22, Russia, Ukraine, and Turkey signed a UN-brokered initiative to provide a humanitarian maritime corridor for ships exporting food and fertilizer from Ukraine via the Black Sea. The deal will expire on November 19.
17:27 GMT 03.11.2022
14:15 GMT 03.11.2022
IAEA Found No Indication of Undocumented Nuclear Activity at Sites in Ukraine it Inspected
IAEA inspectors have completed inspections at three sites in Ukraine following a request from Kiev, they have not identified any undeclared activity there, the agency said in a statement.

Earlier, Lt. Gen. Igor Kirillov, the head of the Radiation, Chemical and Biological Defense Forces of the Russian Armed Forces, said that the Russian Defense Ministry had information about Kiev's plans to use a "dirty bomb" and blame Moscow for this. This week, IAEA experts began checking Ukrainian facilities following a request from Kiev amid Russia's claims.

"Based on the evaluation of the results available to date and the information provided by Ukraine, the Agency did not find any indications of undeclared nuclear activities and materials at the locations," the organization said in a statement.

"Environmental sampling is a commonly used safeguards measure with ultrasensitive analytical techniques that can provide information about past and current activities related to the handling of nuclear materials," the statement read.

IAEA Director General Rafael Grossi said the agency was ready to continue conducting inspections in Ukraine to make sure there were no undeclared activities.

"Director General Grossi stressed that the IAEA remained ready to conduct further such verification activities in Ukraine to verify the absence of undeclared activities and materials and thereby deter any misuse of such materials," the IAEA said in the statement.

In late October, Russian Defense Minister Sergei Shoigu called his counterparts in several Western countries to share Moscow's concerns about the preparation of a dirty bomb in Ukraine, but they rejected the accusations. The Ukrainian authorities also denied the allegations, insisting on their commitment to non-proliferation.
14:00 GMT 03.11.2022
Guterres Urges Grain Deal Extension, Says 10Mln Tonnes Shipped in Just 3 Months

World
Guterres Urges Grain Deal Extension, Says 10Mln Tonnes Shipped in Just 3 Months
13:16 GMT 03.11.2022
13:03 GMT 03.11.2022
Ankara Says 6 Cargo Ships With Grain Left Ukrainian Ports as Part of Renewed Grain Deal
Six cargo ships with grain have left Ukrainian ports after the Istanbul grain deal was renewed, Turkish Defense Minister Hulusi Akar said on Thursday.
"After the resumption of the grain initiative, six ships left the Ukrainian ports. Thus, the number of ships leaving the ports amounted to 426, and the amount of grain transported exceeded 9.7 million tonnes," Akar said.
At the same time, the Ukrainian Ministry of Infrastructure reported that seven ships left Ukrainian ports earlier in the day.
"On November 3, seven ships carrying 290,000 tons of Ukrainian agricultural products left the ports of Odesa, Chornomorsk and Yuzhne for Asian and European countries," the ministry said on its social media.
12:55 GMT 03.11.2022
Microsoft Announces Another $100Mln in Technology Support for Ukraine
Microsoft will provide an additional $100 million worth of technology support for Ukraine through the end of next year, the company’s Vice Chair and President Brad Smith announced in a blog post on Thursday.
“Today, we are announcing that Microsoft will extend technology support free of charge for Ukraine throughout calendar year 2023. This commits our company to providing additional technology aid valued at roughly $100 million, which will ensure that government agencies, critical infrastructure and other sectors in Ukraine can continue to run their digital infrastructure and serve citizens through the Microsoft Cloud,” Smith said.
The new commitment will bring Microsoft’s total aid contribution to Ukraine to more than $400 million since the beginning of the conflict in February, he added.
12:48 GMT 03.11.2022
Air Raid Alert Declared in Kharkov Region, Local Media Reports
12:32 GMT 03.11.2022
11:56 GMT 03.11.2022

Russia's Special Operation in Ukraine
Moscow Has Info on UK's Transfer of Unmanned Underwater Drones to Kiev Ahead of Sevastopol Attack
11:48 GMT 03.11.2022
Two Units of Zaporozhye NPP Transferred From 'Hot Shutdown' Mode to 'Cold Shutdown' Due to Termination of External Power Supply, IAEA Says
11:08 GMT 03.11.2022
Donetsk People's Republic Leader Announces Exchange of Prisoners With Ukraine by Formula 107 to 107
The leader of the Donetsk People's Republic (DPR), Denis Pushilin, announced an exchange of prisoners with Kiev on Thursday, according to the formula 107 people for 107.
"Today we are returning 107 of our fighters from Ukrainian prisons. We will exchange the same number of prisoners to Ukraine, mostly representative of Ukrainian military again," Pushilin said on Telegram.
Pushilin added that 65 of those released are from the DPR and Luhansk People's Republic (LPR).
10:48 GMT 03.11.2022
Russia Resumes Participation in Inspection of Ships in the Black Sea, Currently There are 8 Vessels in the Humanitarian Corridor - UN
Russia resumed its work at the Istanbul-based Joint Coordination Center on Thursday and joined inspections under the grain deal, with eight vessels now transiting the humanitarian corridor in the Black Sea, the UN Secretariat at the JCC said in a statement.

"Today, the Russian Federation delegation resumed its work at the JCC and joined vessel inspections," the statement said.

Seven vessels carrying a total of 290,102 metric tons of grain and food products are transiting the maritime humanitarian corridor under the Black Sea Grain Initiative on Thursday.

"In addition, there is an inbound vessel transiting with destination Yuzhny/Pivdennyi," the secretariat said.
10:13 GMT 03.11.2022
Resumption of Russia's Participation in Grain Deal Not Meaning Its Extension - Kremlin
The resumption of Russia's participation in the grain deal does not mean it was extended, Kremlin spokesman Dmitry Peskov said on Thursday, noting that the deal did not expire yet.

"No, it does not [mean its extension]. Of course, we still have to discuss the topic of the extension officially, the deadline has not yet expired, it is still valid ... by [November] 19, before making a decision to extend, of course, it will be necessary to assess the effectiveness of the deal," Peskov told reporters.

The official also praised Ankara's work on getting written guarantees from Kiev that Ukraine will not use humanitarian corridors under the grain deal for military purpose.
09:59 GMT 03.11.2022
EU's Borrell Praises Role of UN, Turkey in Returning Russia to Grain Initiative
EU foreign policy chief Josep Borrell praised on Thursday the role of the United Nations and Turkey in returning Russia to the Black Sea grain shipping deal and called on the all parties to extend it ahead of its expiration on November 19.
"EU is grateful for role of @UN and Turkiye in Russia’s decision to return to the Black Sea Grain Initiative. Food should never be used as a weapon of war. Grain export is crucial to address global food crisis exacerbated by Russia. Calling on all parties to renew Initiative," Borrell tweeted.
09:28 GMT 03.11.2022
Lavrov: Russia Satisfied Ukraine Provided Written Guarantees Not to Repeat Attacks in Black Sea
Russia is satisfied that Ukraine provided written guarantees not to repeat attempts to use humanitarian routes in the Black Sea for military purposes, Russian Foreign Minister Sergey Lavrov said on Thursday.

"Regarding the grain deal, we were satisfied that at the initiative of Turkey, the Ukrainian leadership signed on paper guarantees not to repeat attempts to use humanitarian routes in the Black Sea for military purposes," Lavrov said at a joint press conference after a meeting with Jordanian Foreign Minister Ayman Safadi.
09:06 GMT 03.11.2022
Russia Sees no Progress in Unblocking of Russian Grain and Fertilizers Supplies Under Grain Deal - Lavrov
Moscow still does not see any progress on unblocking the export of Russian fertilizers and grain under the Black Sea Initiative, Russian Foreign Minister Sergey Lavrov said on Thursday.

"As you know, the implementation of the Ukrainian part of the deal has resumed, but at the same time, we still do not see any result in terms of the second part of the package, proposed at the time by UN Secretary-General [Antonio] Guterres and which involves the removal of any obstacles to export routes for Russian fertilizers and grain," Lavrov told reporters during his visit to Jordan.

Serious measures should be taken to unblock the export, the minister added.
07:34 GMT 03.11.2022
06:26 GMT 03.11.2022
Russian Special Services Prevent Terrorist Attack on Zaporozhye NPP - Russian Security Council Head
06:18 GMT 03.11.2022
Truss' 'It's Done' Message to Blinken After Nord Stream Explosions Confirm British Marines' Participation in Attack, Russian Security Council Head Says
Newsfeed
0
Access to the chat has been blocked for violating the rules . You will be able to participate again through:∞. If you do not agree with the blocking, please use the feedback form
The discussion is closed. You can participate in the discussion within 24 hours after the publication of the article.
To participate in the discussion
log in or register
loader
Chats
Заголовок открываемого материала