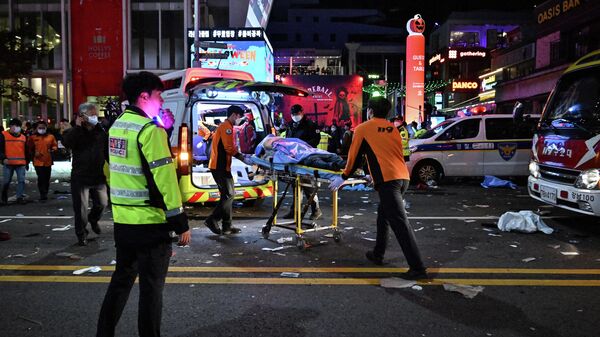 UPDATES: At Least 151 Killed, 82 Injured After Halloween Stampede in Seoul

Subscribe
International
India
Africa
Being updated
Itaewon is a nightlife area in the South Korean capital of Seoul, popular among local residents and foreigners.
Around 50 people ended up suffering cardiac arrest in the Itaewon area of Seoul and had to receive CPR, with local media suggesting a possible connection between this incident and a Halloween party.
After several dozen calls to emergency services from people in Itaewon who said they experienced difficulty breathing, South Korean President Yoon Suk-yeol reportedly ordered authorities to provide first aid to these people.
South Korean Prime Minister Han Duck-soo also urged authorities to strive to minimize damage, while Seoul Mayor Oh Se-hoon decided to cut short his visit to Europe and return home.
About 100,000 people converged upon Itaewon for the Halloween festivities on Sunday, with the resulting gathering becoming the biggest in years amid the recent easing of COVID-19 restrictions, local media said. 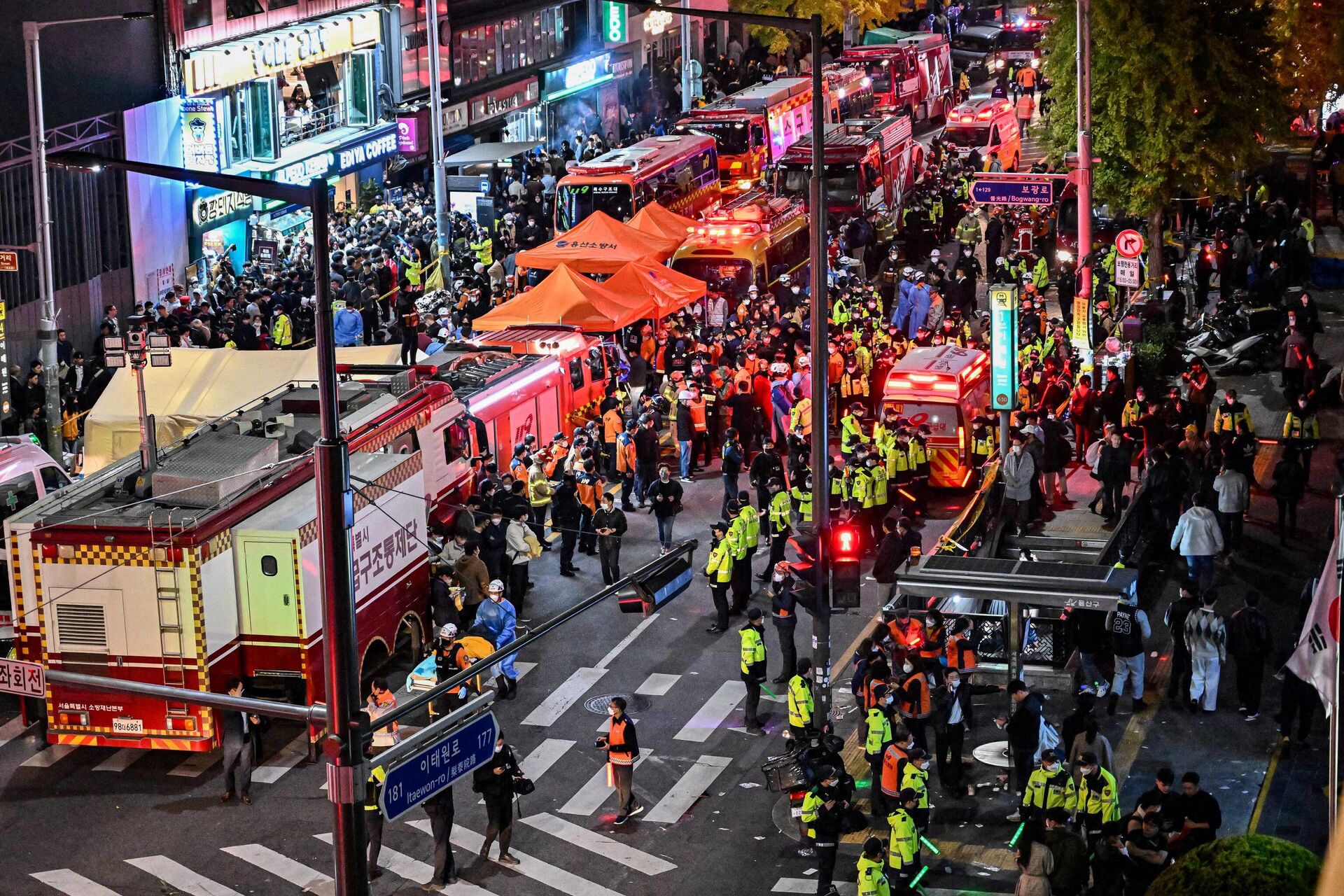 "One Russian woman died, another is at the hospital. We are in contact with the sister of the victim, we are waiting for information on the deceased girl from the police," an embassy representative said on Sunday.
01:38 GMT 30.10.2022
South Korean President Arrives at Site of Deadly Seoul Stampede
South Korean President Yoon Suk-yeol arrived at the site of the deadly stampede in Seoul, which claimed the lives of at least 151 people, a Sputnik correspondent reports.

The president spent about 15 minutes at the site of the tragedy in the Itaewon nightlife district on Sunday.
01:19 GMT 30.10.2022
Death Toll Rises to 151, 82 Injured - Authorities
Latest figures released by authorities indicated the death toll had risen to 151, with the injured tally jumping to 82. At least 19 individuals among the dead were foreigners from Iran, Norway, Uzbekistan and China. Officials stated that the fatalities included 97 females and 54 males.
Officials have indicated that over 350 missing persons reports have been filed in the wake of the crush.
00:52 GMT 30.10.2022
South Korean President Announces Mourning Period After Halloween Crush
21:56 GMT 29.10.2022
Biden Offers 'Deepest Condolences' to Families Affected by Seoul Crush

President Biden statement on Itaewon tragedy in Seoul, South Korea: "We grieve with the people of the Republic of Korea and send our best wishes for a quick recovery to all those who were injured." pic.twitter.com/159H0b52Ls

21:43 GMT 29.10.2022
Two Foreigners Among Dead as Fatalities Hold at 149 - Officials
Seoul officials confirmed at a their latest press conference that the death toll stood at 149, adding that two foreigners were among the dead and 15 others were among the injured. Officials did not release additional information regarding their nationalities.
As for the injured count, the tally was revised to 76, 19 of whom sustained serious injuries.
About 270 reports of missing people had been received by city authorities as of Sunday, following the deadly stampede, according to Yonhap.
21:36 GMT 29.10.2022
Initial US Response on Seoul Stampede Issued by Secretary Blinken

We were deeply saddened to learn of the deadly stampede today in Seoul. We send our thoughts and deepest condolences to the family and friends of the deceased and injured, as well as to the people of the ROK as they mourn this horrific tragedy.

According to the emergency services, the stampede started at around 10:22 p.m. local time (13:22 GMT) on Saturday as crowds of people were gathering in the area to celebrate Halloween. No visitors were found to be injured in local clubs and restaurants.
Choi Seong-beom, who serves as the head of the fire department in Yongsan, told reporters during a debrief that "many casualties were incurred as a crowd of people fell over during Halloween parties." The majority of victims were in their 20s, and no official cause of the crowding incident has been detailed despite earlier reports that drugs played a role in the matter.
18:36 GMT 29.10.2022
Four Hundred Emergency Workers Deployed to Seoul Stampede Area
Over 400 emergency workers in South Korea were sent to the scene of the tragedy in Seoul, media said citing South Korean National Fire Agency official Choi Cheon-sik.
18:04 GMT 29.10.2022
At Least 120 Killed, 100 Injured as a Result of Stampede in Seoul - Reports
17:40 GMT 29.10.2022
South Korean President Holds Emergency Meeting
An emergency response meeting was held Sunday in Seoul over the stampede in Itaewon area of the city, with South Korean President Yoon Suk-yeol himself presiding over the meeting, local media said citing officials.
17:25 GMT 29.10.2022
Seoul Stampede Death Toll Reportedly Reaches 59
At least 59 people died and 150 got injured during a stampede that occurred in Seoul during Halloween celebrations, local media report citing authorities.
17:11 GMT 29.10.2022
More Videos From the Scene of Itaewon Stampede Surface Online
17:03 GMT 29.10.2022
Death Toll Reportedly Rises to 9
South Korean officials reportedly announced that at least nine people perished during the incident in Itaewon.
Newsfeed
0
Access to the chat has been blocked for violating the rules . You will be able to participate again through:∞. If you do not agree with the blocking, please use the feedback form
The discussion is closed. You can participate in the discussion within 24 hours after the publication of the article.
To participate in the discussion
log in or register
loader
Chats
Заголовок открываемого материала