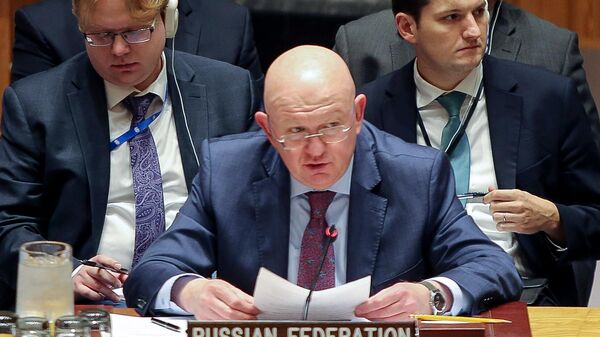 Subscribe
International
India
Africa
Being updated
On Wednesday, Russian President Vladimir Putin signed decrees on the introduction of martial law on the territory of four new subjects of the Russian Federation and in other territories of the country where a 'special regime' has been declared.
Kiev continues to shell Russian territory using weapons and ammunition provided by the NATO countries, and Moscow retaliated with airstrikes against Ukrainian energy, defense, military, and communications infrastructure.
Earlier this week, Sergei Surovikin, the general of the armed forces and commander of all units in the special military operation zone in Ukraine, stated that the situation in the area of Russia's operation is tense, as Ukrainian forces continue to attack Russian positions.
Follow Sputnik's Live Feed to Find Out More!
Table of contents
New firstOld first
23:06 GMT 21.10.2022
Air Raid Alerts Sound in Several Ukrainian Regions, Including Kiev
21:18 GMT 21.10.2022
Another Attack on Civilian Crossing in Kherson Region Repelled - Spokesperson
19:53 GMT 21.10.2022
Nebenzia: UN Secretariat Has No Mandate to Probe Claims of Iran Providing Drones to Russia
18:37 GMT 21.10.2022

Russia's Special Operation in Ukraine
Ukraine's National Security Head Calls for Abolishing Russian Language in Country
18:32 GMT 21.10.2022
Several Districts in Kiev, Surrounding Region Completely Without Electricity: Reports
Several districts in Kiev and the Kiev Region have been left without electricity due to shelling, local media reported on Friday.
Earlier in the day, Ukrainian Energy Minister German Galushchenko said that Russian strikes on Ukraine's infrastructure affected at least half of the country's thermal energy generation capacity.
18:31 GMT 21.10.2022
Blinken: US to Explore Every Means to Advance Diplomacy With Russia If Sees Chance
The United States will consider every means to advance diplomacy with Russia if it sees a chance for it to succeed amid tensions over Ukraine, Secretary of State Antony Blinken said on Friday.
"We consider and will consider every means to advance diplomacy if we see an opening to advance it by whatever means. Of course, we'll always look at it, Blinken said during a press briefing. "At this moment, Russia shows no signs of being willing to engage in meaningful diplomacy by any means."
18:27 GMT 21.10.2022
McConnell Says Senate Republican Majority to Focus on Delivery of Weapons, Aid to Ukraine
US Senate Minority Leader Mitch McConnell said on Friday that should Republicans become the majority in the midterms elections in November, they will focus their attention on providing timely delivery of weapons and greater allied assistance to Ukraine.
“A Republican majority in the Senate will focus its oversight on ensuring timely delivery of needed weapons and greater allied assistance to Ukraine,” McConnell said in a statement.
The Minority Leader also vowed that Republicans will concentrate their efforts on rebuilding and modernizing the US military, as well as on confronting terrorist states, including Iran, and shoring up defenses in Asia.
In addition, McConnell accused Russia of "weaponizing" energy resources and called unacceptable the Biden administration drawing oil from the United States' Strategic Petroleum Reserve to improve Democrats’ low approval ratings ahead of midterm elections.
“Draining the Reserve to the lowest point in decades and strangling our domestic energy production capacity will make America more vulnerable to disruptions and manipulations of global energy markets,” McConnell said.
18:15 GMT 21.10.2022
Ukraine's National Security Head Calls for Abolishing Russian Language in Country
Ukrainian National Security and Defense Council head Alexey Danilov said on Friday that the Russian language should be completely abolished in Ukraine, noting that reaching an understanding with the Russian-speaking part of Ukrainian population poses a threat to the state.

"The Russian language in general should disappear from our territory as an element of hostile propaganda and brainwashing of our population," Danilov said on a national talk show.

Danilov claimed that the "narrative" about the need to reach mutual understanding with Russian-speaking Ukrainians is highly dangerous for the state. At the same time, the official called for the compulsory study of English in the country in addition to the Ukrainian language.

"To plant these Russian narratives here is a very, very dangerous thing. Presumably, we have to understand each other, who they are, what they are. Look, we don't need anything from them. Let them get rid of us, let them go to their swamps and croak in their Russian language," Danilov said.

Danilov complained about a large number of Ukrainian political experts who regularly appear on television using Russian as the main language. In response to this, the show host proposed to create and broadcast a list of Ukrainian public figures that speak Russian.

Based on the 2001 census, over 14.3 million Ukrainians, or almost 30% of the country's population, called Russian their native language. Since the Maidan coup in 2014, Kiev has adopted a number of policies aimed at regulating and limiting the use of the Russian language on TV and in public places, including in education and service sector.

The discrimination of the Russian-speaking population led to a civil war in Ukraine, which resulted in the Donetsk and Lugansk people's republics declaring their independence and, finally, appealing to Russia for help in defending themselves against Ukrainian aggression in late February.

Meanwhile, Russian President Vladimir Putin said on October 14 that the very question of the abolition of the Ukrainian language in Russia is illegal, since it is one of the state languages in the Russian federal subject of Crimea.
17:55 GMT 21.10.2022
16:23 GMT 21.10.2022
US Has Means, Will to Support Ukraine in Conflict With Russia: Biden
The United States has the means and the will to support Ukraine in the ongoing conflict with Russia, President Joe Biden said on Friday.
When asked whether the United States has the means and the will to support Ukraine, Biden stated, "Yes."
"Because when we support Ukraine, we're supporting all of Europe. We're supporting NATO," Biden said. "I don't understand the threat that they're [Republicans] are saying they may have to stop funding Ukrainians in their war against this brutal dictator."
Biden said on Thursday he is "worried" that further US military assistance for Ukraine may not get approved if Republicans win control of Congress in the midterm elections in November.
US House Minority Leader Kevin McCarthy has pledged that if the Republicans become a majority in the lower chamber of Congress in the midterms, Ukraine will not get a "blank check" for assistance given the looming recession in the United States.
Biden said the Republicans have "no sense of American foreign policy."
US lawmakers are looking to pass a new $50 billion military aid package for Ukraine before January amid concerns that the upcoming midterm elections in November could usher in a new Congress less willing to prop up Kiev, NBC reported on Thursday, citing legislators and aides familiar with the effort.
Congress has approved some $70 billion in aid to Ukraine since the beginning of Russia’s special military operation on February 24.
US voters go to the polls on November 8 to cast ballots in the midterm elections, with the Democratic Party's narrow control of Congress hanging in the balance. All the 435 House seats and 34 of the 100 seats in the Senate are up for election this year, in addition to statewide and local positions.
The Democrats currently control the House by eight seats while the Senate is split 50-50 with Vice President Kamala Harris representing the tie-breaking vote in her role as president of the upper chamber.
Poll aggregator Real Clear Politics (RCP) has Republican candidates ahead in 221 contests, Democrats leading in 176, with 38 considered "toss ups." 218 are needed to win control of the lower chamber. If the races ended today, Republicans would end up with 47 seats in the Senate, the Democrats 46, with seven races in the toss-up category.
15:58 GMT 21.10.2022
Iran Urges Citizens to Leave Ukraine
The Iranian Foreign Ministry on Friday recommended that its citizens refrain from traveling to Ukraine in the near future and called on those who are already in the country to leave it urgently for safety reasons.
"Considering the escalation of military clashes and increased insecurity in Ukraine, all Iranian nationals are strongly advised to refrain from traveling to that country," the ministry said, as quoted by the Tasnim News Agency.
The ministry also called on the Iranian nationals residing in Ukraine to leave the country, urging them to remain calm and, if necessary, contact the Iranian Embassy in Kiev, according to the agency.
15:57 GMT 21.10.2022
Pentagon Welcomes Maintainig an Open Line of Communications With Russia
The US Department of Defense welcomes maintaining an open line of communications with Russia following the call, first in months, between the two defense chiefs on Friday, Deputy Pentagon press secretary Sabrina Singh said.
"Today provided an opportunity to connect. It was something that the [US] Secretary [of Defense Lloyd Austin] initiated. It was an opportunity to have a call with [Russian] Minister [of Defense Sergei] Shoigu. We welcome maintaining an open line of communication. Dialogue is good here," Singh said during a press briefing.
15:40 GMT 21.10.2022

Multimedia
Russian Forces Help People of Kherson Evacuate Across Dnepr Amid Ukraine Strikes
13:53 GMT 21.10.2022
Austin in Call With Shoigu Emphasizes Importance of Communication Amid Ukraine Conflict
US Secretary of Defense Lloyd Austin in a call with Russian Defense Minister Sergei Shoigu emphasized the importance of keeping lines of communication between the two countries open amid the ongoing conflict in Ukraine, the Pentagon said on Friday.

“On October 21, Secretary of Defense Lloyd J. Austin III spoke by phone with Russian Minister of Defense Sergey Shoygu. Secretary Austin emphasized the importance of maintaining lines of communication amid the ongoing war against Ukraine,” the department said in a press release.

13:48 GMT 21.10.2022
EU Council Calls on Commission to Present Options on Use of Frozen Assets to Support Ukraine

"On October 21, 2022, a phone conversation was held between Russian Defense Minister Gen. Sergei Shoigu, and the Secretary of Defense of the United States, Lloyd Austin. Topical issues of international security, including the situation in Ukraine, were discussed," the ministry said.

12:26 GMT 21.10.2022
Media Report Multiple Explosions in Kiev Region
12:23 GMT 21.10.2022
One Journalist Killed and Ten Wounded by Ukrainian Shelling in Kherson
12:20 GMT 21.10.2022
Air Raid Alerts Announced in Kiev and Other Cities Across Ukraine, Authorities Say
12:17 GMT 21.10.2022
Air Raid Alert Sounded in Nikolaev and Kirovograd Regions
Newsfeed
0
Access to the chat has been blocked for violating the rules . You will be able to participate again through:∞. If you do not agree with the blocking, please use the feedback form
The discussion is closed. You can participate in the discussion within 24 hours after the publication of the article.
To participate in the discussion
log in or register
loader
Chats
Заголовок открываемого материала