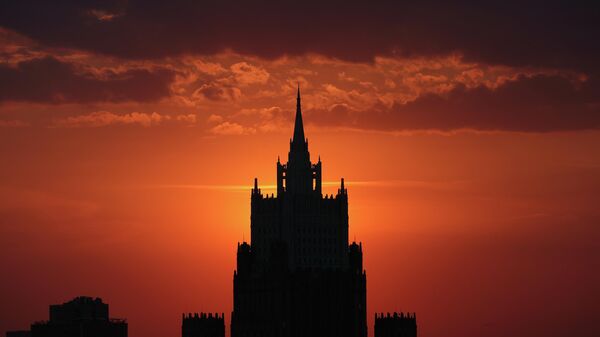 LIVE UPDATES: US Calls for Peace Talks on Ukraine Nothing But Hypocrisy - Russian Foreign Ministry

Earlier, the Civil Service for Emergency Situations of Ukraine stated that five regions were completely de-energized after the morning strikes, the remaining regions were partially de-energized. Volodymyr Zelensky’s office urged the Ukrainians to reduce energy consumption as much as possible in the evening.

"Ukraine stops exporting electricity due to Russian missile attacks on energy facilities," the ministry said on Facebook (banned in Russia as an extremist social network).

The ministry noted that Kiev was exporting electricity to the EU, as well as "through separate lines to Moldova and Poland."

"Today's missile attacks hit thermal generation and electrical substations, forcing Ukraine to stop exporting electricity from October 11, 2022, to stabilize its own energy system," the ministry said.
14:13 GMT 10.10.2022
ICRC to Resume Full Humanitarian Assitance to Ukraine When Security Situation Normalizes, Press Service Tells Sputnik
The International Committee of the Red Cross (ICRC) press service confirmed to Sputnik that the humanitarian organization paused its operations in Ukraine on Monday over security concerns and sheltered its staff.
Earlier in the day, the media reported that the ICRC temporarily halted operations in Ukraine.
"Given the security situation in Ukraine earlier today, ICRC teams momentarily paused movements and sheltered and continued to work in place. ICRC’s full schedule of humanitarian assistance will resume immediately as the security situation allows. We are monitoring humanitarian needs to provide assistance as necessary," the press service said.
13:30 GMT 10.10.2022
EU Claims Russia's Investigation of Crimea Bridge Blast Not Credible
"The Kerch bridge is an illegal structure basically building on connection between Ukrainian territory and Russian mainland without any approval and authorization from legitimate Ukrainian authorities. We have no way to see or to know what happened on Saturday at the bridge, what led to the blast," EU foreign affairs spokesman Peter Stano said in a briefing on Monday.
The spokesperson said all the information coming from Moscow on the issue "does not merit any commentary."
13:19 GMT 10.10.2022
Map of Strikes on the Ukrainian infrastructure