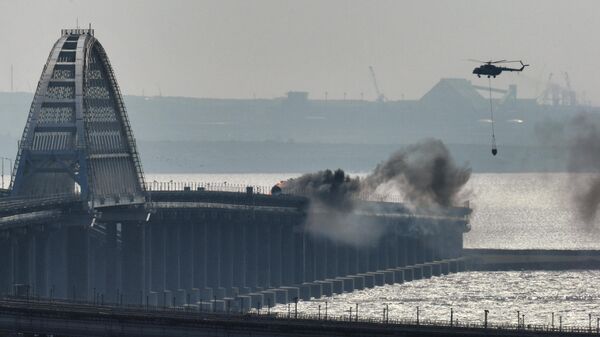 "According to preliminary data, three people died as a result of the incident. They were presumably passengers of a car, which was near the exploded track. As of now, the bodies of a man and a women have been recovered from the water, their identities are being established." the committee stated.
09:56 GMT 08.10.2022
Security at Port Kavkaz Has Been Strengthened Since 2014, No Added Measures Required in Connection With Crimean Bridge Emergency - Port Representative
09:24 GMT 08.10.2022
Crimea Head Confirms That Peninsula is Fully Provided With Fuel and Food, There is No Danger
08:41 GMT 08.10.2022

"The transport companies are resuming the operation of the Kerch Strait ferry line. The coastal infrastructure is ready for these purposes. As of 8:30 a.m. local time [05:30 GMT], the first ferry departed to the terminal for loading, and three more ferries of different shipowners are preparing to depart to the crossing," the ministry said.
07:19 GMT 08.10.2022
Fire on Railway Train With Diesel Fuel on Crimean Bridge Put Out - Ministry Of Emergency Situations
The fire on the freight train on the Crimean bridge was extinguished, Russia’s Ministry of Emergency Situations told Sputnik on Saturday.

"The fire on a freight train with diesel fuel on the Crimean bridge has been extinguished, at the moment there is no open burning," a ministry official said.

Some 250 people and 70 pieces of equipment were involved in putting out the fire, he added.
07:18 GMT 08.10.2022
Ukrainian Presidential Adviser Podolyak Calls Fire on Crimean Bridge 'Beginning'
Ukrainian Presidential Adviser Mykhailo Podolyak said on Saturday that the incident on the Crimean Bridge, where a truck explosion caused seven fuel tanks of a freight train to catch fire and a partial collapse of two car spans, was "the beginning."

"Crimea, the bridge, the beginning. Everything illegal must be destroyed, everything stolen must be returned to Ukraine, everything occupied by Russia must be expelled," Podolyak tweeted.
07:12 GMT 08.10.2022
Kremlin Says No Forecasts Concerning Restoration Period of Crimean Bridge
There are no forecasts concerning the restoration of the Crimean Bridge, which presumably has been damaged by the Ukrainian forces, Kremlin spokesman Dmitry Peskov told Sputnik on Saturday.

"No. There are no forecasts yet," Peskov said.

Russia's National Antiterrorism Committee (NAC) said on Saturday that a truck was blown up on the Crimean Bridge, which caused an inflammation of seven fuel tanks of a railway train and a partial collapse of two car spans.

"Train movement is temporarily suspended due to the incident at the Vyshestebliyevskaya ramp (the bridge) – Kerch-Yuzhnaya Novy Park station … The sale of train tickets to Crimea is temporarily halted," the transport operator said on Telegram.

Earlier in the day, Russia's National Antiterrorism Committee (NAC) said that a truck was blown up on the Crimean Bridge, which caused seven fuel tanks of a freight train to catch fire and a partial collapse of two car spans.
Newsfeed
0
Access to the chat has been blocked for violating the rules . You will be able to participate again through:∞. If you do not agree with the blocking, please use the feedback form
The discussion is closed. You can participate in the discussion within 24 hours after the publication of the article.
To participate in the discussion
log in or register
loader
Chats
Заголовок открываемого материала