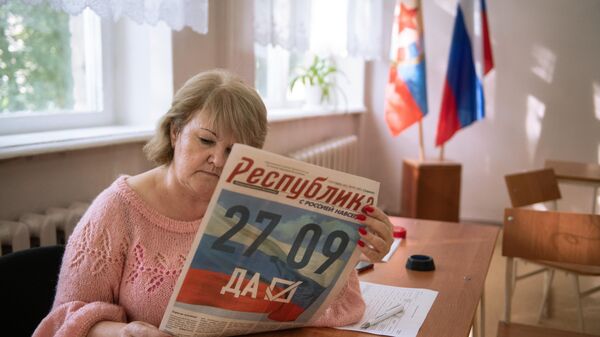 "Instead of helping to end the conflict, the European Union does not hide its desire to prolong the hostilities as much as possible, despite the casualties and destruction, to ensure 'victory on the battlefield,' to weaken our country with the help of illegitimate unilateral restrictions," the statement says.

The Russian Foreign Ministry stressed that the EU's position was especially cynical, because through this previously peaceful integration association, in violation of not only international, but also its own rules for controlling the export of military technologies and equipment, the Kiev regime was being pumped up with lethal weapons.
18:06 GMT 23.09.2022
Borrell's Statement on Partial Mobilization, Referenda Lacks Objectivity - Moscow
The statement of EU foreign policy chief Josep Borrell about partial mobilization in Russia and referenda in the liberated territories is riddled with a "confrontational mood," devoid of objectivity and out of touch with reality, Russian Foreign Ministry spokeswoman Maria Zakharova said.

Borrell earlier threatened Russia with new sanctions over the partial mobilization and the referenda.

"We paid attention to this statement by the head of European diplomacy, which reflects the common position of EU countries. Like many recent statements by Josep Borrell, it is riddled with a confrontational mood, completely devoid of objectivity and out of touch with reality," Zakharova said in a statement.

She stressed that the accusations of Russia from the European Union were hypocritical, given how Brussels turned a blind eye to the transformation of Ukraine into a totalitarian state of the "Nazi type," where for many years basic human rights and freedoms had been violated, including to life, freedom of speech, access to information, freedom of expression of opinion, freedom of conscience, use of one's native language. In addition, there is a total mobilization of the entire adult population, including women, for recruitment into the ranks of the national battalions and the Ukrainian army.
17:35 GMT 23.09.2022
Turnout at Referendum in Zaporozhye Region is 20,52% as of 17:00 GMT, Head of Electoral Commission Says
17:04 GMT 23.09.2022
Turnout at Referendum in LPR is 21,97% as of 17:00 GMT, Local Electoral Commission Says
16:59 GMT 23.09.2022
Finland to Restrict Entry, Transit From Russia in Coming Days
Finland will restrict the transit of Russians with Schengen visas, as well as the entry of Russian tourists into the country, in the coming days, Finnish Foreign Minister Pekka Haavisto said on Friday.

Since September 19, Finland has been the only EU country bordering Russia with a land border open to Russians. Earlier on Friday, the Finnish authorities announced that a decision in principle to ban tourism and transit from Russia had been made.

"Based on this decision, the movement of tourists will be stopped. Visas may be suspended or restricted, except for special groups, such as people visiting relatives. They [groups allowed to enter] will be detailed in the decision," Haavisto said at a briefing broadcast by the Finnish media.

The minister noted that the decision would come into force in the coming days.

He noted that the preferential procedure for obtaining visas for property owners will be closed.

"Details of the decision are still being discussed. Visas can be issued for reasons such as family relationships, study and work. The loophole for property owners will be closed," Haavisto said.

The minister noted that a fundamental decision had been made, and all involved departments were urgently clarifying legal details.
15:43 GMT 23.09.2022
'This is Fake': Peskov Comments on Reports and Messages in Social Media About Increase in Number of Mobilized Over 300,000
Kremlin spokesman Dmitry Peskov dismissed reports of alleged draft of more than 300,000 people as part of the partial mobilization.

Earlier, in a number of media and Telegram channels, there were reports that more than one million people were called.

"These are all fakes," Peskov told Sputnik.
15:15 GMT 23.09.2022
Some EU States Propose to Ban Use of Russian LNG, Limit Nuclear Cooperation - Reports
A number of EU countries are going to propose to include ban on the use of the Russian liquefied natural gas (LNG) products and restrict nuclear energy cooperation with Moscow in a new sanctions package against Russia, Bloomberg reported on Friday.

Poland, Ireland, Latvia, Estonia and Lithuania plan to introduce a ban on Russian LNG as part of new EU sanctions against Russia, as well as put restrictions on nuclear energy cooperation, according to a document obtained by the news agency.

Another measures that could possibly be proposed by this group of EU countries include a ban on transfer of US dollar banknotes to Russia and stricter control over transactions of crypto assets, Bloomberg wrote.
15:13 GMT 23.09.2022
Kherson Region Official Says Observers From US, France Monitoring Vote on Joining Russia
Observers from the United States and France are monitoring the course of the referendum in the Russian-controlled parts of the Kherson region of Ukraine, spokeswoman of the local election commission, Marina Zakharova, said on Friday.

"Foreign observers have already arrived, they are representatives of two countries - France and the United States. They expressed a desire to travel to remote areas of the Kherson region, and we provided them with such an opportunity. At the moment they are working with our voters," Zakharova told reporters.

On Tuesday, the breakaway republics of Donetsk and Luпansk (DPR and LPR), as well as the Russian-controlled parts of the Ukrainian regions of Zaporozhye and Kherson, said that they would hold referendums on accession to Russia from September 23-27.

On Wednesday, Russian President Vladimir Putin voiced his support for referenda, causing a backlash from the Western countries. In particular, on Thursday, EU foreign policy chief Josep Borrell announced that the bloc would impose new sanctions on Russia's leadership and people involved in organizing referenda.

The DPR and LPR proclaimed their independence from Ukraine in 2014 after holding self-determination referendums. In February 2022, Russia recognized the DPR and LPR and launched a military operation in Ukraine in response to calls for help from the two breakaway republics.
14:22 GMT 23.09.2022

World
Polish Schools Reportedly Plan to Distribute Potassium Iodide Pills as Kiev Continues to Shell ZNPP
Newsfeed
0
Access to the chat has been blocked for violating the rules . You will be able to participate again through:∞. If you do not agree with the blocking, please use the feedback form
The discussion is closed. You can participate in the discussion within 24 hours after the publication of the article.
To participate in the discussion
log in or register
loader
Chats
Заголовок открываемого материала