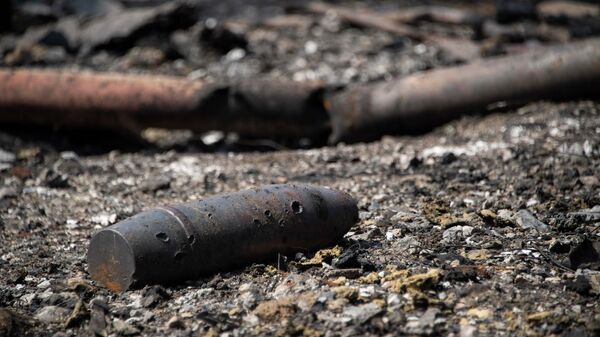 Evgeny Mikhaylov
All materialsWrite to the author
On Wednesday, Russian President Vladimir Putin stated he had signed a decree on partial mobilization in the country. According to Defense Minister Sergei Shoigu, it will only affect 1% of the Russian mobilization resource.
In his address to the nation, Vladimir Putin commented on the special military operation in Ukraine, saying that the goal of the op remains the same - the liberation of Donbass. The president stressed that Russian troops are acting competently, as they are clearing cities from neo-Nazis and rescuing people from the Ukrainian regime.
At the same time, he said Moscow will support the results of the referendums in the DPR, LPR, Kherson and Zaporozhye regions, which are scheduled for September 23-27.
Follow Sputnik's live feed to get the latest updates!
Table of contents
New firstOld first
03:34 GMT 22.09.2022
Additional Sanctions to Be Imposed on Russia Over Donbass Referenda - EU Statement
The European Union will impose new sanctions on Russia's leadership and people involved in organizing referenda in the Donetsk and Lugansk People's Republics (DPR and LPR), the Kherson and Zaporozhye regions, according to a declaration by EU foreign policy chief Josep Borrell on behalf of the EU.

"Russia, its political leadership, and all those involved in organizing these 'referenda' as well as in other violations of international law and international humanitarian law in Ukraine will be held accountable, and additional restrictive measures against Russia will be brought forward as soon as possible in coordination with our partners," Borrell said.

He also said the EU foreign ministers have not compiled a new sanctions list yet, and added the EU will continue to render military assistance to Ukraine, and adopt new personal and sectoral sanctions.
03:33 GMT 22.09.2022

"If the sanctions were lifted, prices would immediately fall by half, inflation would also drop. Without sanctions, the European economy would recover and could avoid an impending recession," Magyar Nemzet quoted Orban as saying at a meeting of the ruling coalition of the Fidesz party and Christian Democratic People's Party.
23:32 GMT 21.09.2022

Russia's Special Operation in Ukraine
Dutch Foreign Minister Calls for More Arms Supplies to Ukraine Amid Mobilization in Russia
20:08 GMT 21.09.2022
IAEA Starts Negotiations With Ukraine, Russia on Aspects of ZNPP Security Zone – Grossi
The International Atomic Energy Agency (IAEA) has started negotiations with Ukraine, Russia, and other partners on the parameters of a potential security zone around the Zaporozhye nuclear power plant (ZNPP) and specific aspects of it, Director General Rafael Grossi said on Wednesday.

"I'm here working on the establishment of a nuclear safety and security protection zone around the nuclear power plant Zaporozhye here. I had a meeting with the two foreign ministers – [Russian] Foreign Minister [Sergey] Lavrov, [Ukrainian] Foreign Minister [Dmytro] Kuleba, and then a meeting organized or presided by [French] President [Emmanuel] Macron and the Ukrainian Prime Minister [Denys Shmyhal], with the foreign ministers of the G7 countries, the EU, High Representative Josep Borrell, and Mexico as well was present. The wheels are in motion," Grossi told a press briefing on the sidelines of the UN General Assembly.

Donbass, Kherson & Zaporozhye Referendums to Join Russia
Lavrov: Donbass, Zaporozhye and Kherson Regions Have Right to Self-Determination Under UN Charter
16:48 GMT 21.09.2022
Balitsky Asks Putin to Consider Incorporating Zaporozhye Region Into Russia if Such Decision is Made at Upcoming Referendum
16:40 GMT 21.09.2022
Powerful Explosion Occurs in KhBK Microdistrict in Kherson, Black Smoke Seen on Site
KHERSON (Sputnik) - A powerful explosion occurred in the KhBK microdistrict in Kherson, not far from the KhBK-Tavrichesky bridge crossing, a Sputnik correspondent reported from the scene.

Black smoke is rising at the explosion site.
15:05 GMT 21.09.2022
Putin: Weakening Sovereignty is Lethal for Russia, There Will be No Such Mistakes on Our Part
15:04 GMT 21.09.2022
Kiev Regime May Engage in Provocations Amid Referendum in Zaporozhye, Head of Regional Administration Says
The authorities have taken all precautions in the event of provocations by the Kiev regime amid the upcoming referendum, according to Evgeny Balitsky, head of the Zaporozhye regional administration.
He has emphasized that all the necessary arrangements have been made for the vote, which will take place on September 23-27.
14:37 GMT 21.09.2022
Russia to Cooperate With IAEA to Force Kiev to Stop Shelling Zaporozhye NPP, Foreign Ministry Says
13:44 GMT 21.09.2022
Stoltenberg: NATO Does Not Seek Conflict in Russia Nor Participate in Ukrainian
13:39 GMT 21.09.2022
German Gov't Says Chancellor 'Took Note' of Reports About Mobilization in Russia
German Chancellor Olaf Scholz 'took note' of reports of partial mobilization in Russia, Federal Government Deputy Spokesman Wolfgang Buchner said on Wednesday.

"The chancellor took note of Putin's statement," Buchner told reporters at a briefing.

"We always have to take this kind of rhetoric seriously. It is irresponsible rhetoric for a nuclear power to talk that way," Kirby told ABC News.

The US is monitoring the situation, but sees no need to boost its own strategic forces' readiness, he added.
12:18 GMT 21.09.2022
White House on Russia Mobilization: 300,000 is a Lot
The mobilization of 300,000 reservists in Russia is "a lot," National Security Council coordinator John Kirby told ABC news on Wednesday.
12:04 GMT 21.09.2022
Ukrainian Crisis Should Be Addressed Urgently, Negotiations Only Way to Stop It, Belarusian Security Council Chief Says
Newsfeed
0
Access to the chat has been blocked for violating the rules . You will be able to participate again through:∞. If you do not agree with the blocking, please use the feedback form
The discussion is closed. You can participate in the discussion within 24 hours after the publication of the article.
To participate in the discussion
log in or register
loader
Chats
Заголовок открываемого материала