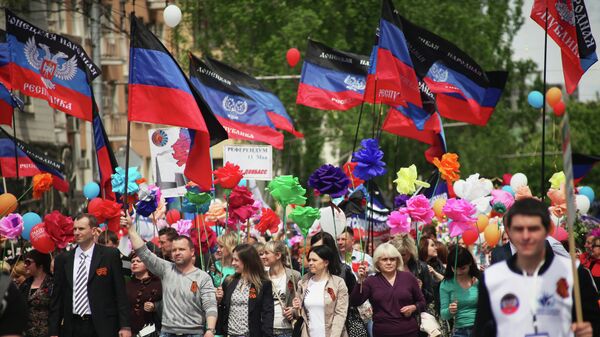 Being updated
On Monday, the civic chambers of Donetsk and Lugansk made appeals to the heads of the republics to initiate referendums on becoming parts of the Russian Federation.
The Russian armed forces and the allied DRP and LPR militia continue their special military operation in Donbass and on Ukrainian territory. The situation remains tense, with Kiev's forces shelling the Zaporozhye Nuclear Power Plant - the biggest NPP in Europe.
Russia launched the special military op in Ukraine on February 24, after Kiev intensified attacks against the Donetsk and Lugansk People’s Republics (DPR and LPR).
Follow Sputnik's live feed to get the latest updates!
Table of contents
New firstOld first
01:46 GMT 21.09.2022
OSCE Leadership Condemns Plans to Hold Referenda in DPR, LPR, Other Regions
The leadership of the Organization for Security and Cooperation in Europe (OSCE) condemns plans to hold referendums on "Ukraine's occupied territories," the organization said in a statement.

"Any elections or referenda on the territory of Ukraine can only be announced and conducted by legitimate authorities in compliance with national legislation and international standards. Therefore the planned “referenda” will be illegal," according to the statement.
01:11 GMT 21.09.2022
Kherson Region Within Its Administrative Borders to Become Part of Russia, Authorities Say
The Kherson Region within its administrative borders will become part of Russia, Kirill Stremousov, deputy head of the regional administration, told Sputnik.
"After the referendum, the entire Kherson Region within its administrative boundaries will become part of the Russian Federation," Stremousov said.
20:59 GMT 20.09.2022
Trudeau Says Canada Denounces Russia's Planned Referendums in Eastern Ukraine
The Canadian government denounces Russia's planned referendums in Eastern Ukraine and does not intend to recognize the results, Prime Minister Justin Trudeau said on Tuesday.

"Canada denounces Russia’s planned 'referendums' in occupied regions of Ukraine. We will never recognize them. This is a blatant violation of international law. It is a further escalation of war, and it is unacceptable," Trudeau said via Twitter.
20:54 GMT 20.09.2022
Estonia Fears Surge in Number of Ukrainian Refugees as Winter Coming, Deputy Chancellor Says
The number of Ukrainians seeking temporary protection in Estonia may increase significantly in the coming months, as the civilian infrastructure in Ukraine is seriously damaged and unsuitable to survive the looming cold winter, Veiko Kommusaar, deputy chancellor of the interior ministry, said on Tuesday.

Kommusaar assumed that the number of recipients of temporary protection may increase to over 50,000 people, with those refugees who do not seek help from the state will be added to them. Currently, there are about 15,000 such refugees in Estonia.

According to Kommusaar, the cold winter will certainly play a role in this issue, as well as in how quickly it will be possible to restore communication and heating in the districts.
19:45 GMT 20.09.2022
EU Threatens Russia With New Sanctions If Referenda Conducted
The European Union threatens Russia with new sanctions in the event of referenda in the LPR, DPR, Kherson and Zaporizhzhia regions, EU foreign policy chief Josep Borrell said in a statement.

Donbass, Kherson & Zaporozhye Referendums to Join Russia
Poll: Over 90% of People in DPR and LPR Support Republics Joining Russia
13:37 GMT 20.09.2022
Zaporozhye Region to Hold Referendum on Joining Russia on September 23-27
The head of the Zaporozhye regional administration, Yevgeny Balitsky, has said that there will be a referendum on joining Russia on September 23-27, and that an absolute majority of people wants to take part in the vote.
12:47 GMT 20.09.2022
Majority of People in DPR, LPR, Kherson and Zaporozhye Regions Would Like to Join Russia - Poll
According to the latest INSOMAR poll, the majority of people in the LPR, DPR, Kherson and Zaporozhye regions would like to join Russia after the special military operation is over.
83 percent of people in the LPR, 80 percent in the DPR, 72 percent in Zaporozhye and 65 percent in Kherson intend to vote in a referendum to join Russia, as the poll held on September 19 reveals.
12:38 GMT 20.09.2022
Chairman of State Duma's Commitee on International Affairs Calls to 'Support and Protect' Donbass People
Leonid Slutsky, chairman of State Duma's Committee on International Affairs, said that in the event the LPR and DPR people vote to join Russia, he and his colleagues will "advocate for creating new regions" in Russia as soon as possible.
"We share common language, traditions and culture. These are our people! Let's support and protect them!" he wrote on his Telegram channel.
12:21 GMT 20.09.2022
Kherson Region to Hold Referendum on Joining Russia on September 23-27
The region will hold a referendum the same day as the Donetsk and Lugansk People's Republics.
12:05 GMT 20.09.2022
DPR Head Says Donbass People Deserve to be Part of Russia, as LPR Leader Warns Vote Can't be Delayed