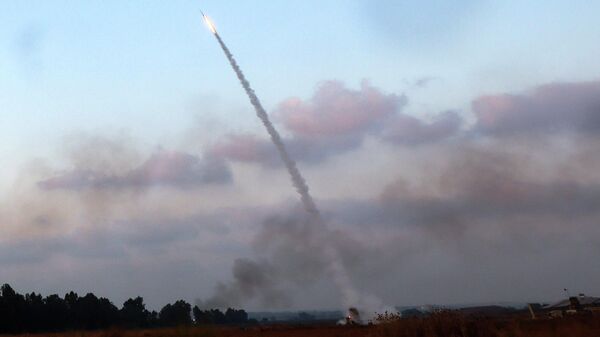 Being updated
The Israel Defense Forces launched Operation Breaking Dawn on 5 August, citing security concerns over threats they had received from Palestinian Islamic Jihad after two senior members of the group had been arrested in the West Bank.
Israel's operation against Palestinian Islamic Jihad (PIJ) in Gaza has entered its third day.
Earlier on Sunday, the Al-Quds Brigades, the armed wing of the PIJ, announced that its high-ranking commander in southern Gaza, Khaled Mansour, was killed during an Israeli airstrike in the city of Rafah on Saturday night. The information was confirmed by the IDF.
A senior Islamic Jihad commander in northern Gaza, Tayseer al-Jabari, was killed on Friday during the first hours of the operation.
According to the Palestinian health ministry, the death toll in Gaza has risen to at least 29 people, including six children, and more than 200 have been injured as a result of the Israeli airstrikes against PIJ targets.
Follow Sputnik's live feed and Telegram channels to get the latest updates:
Sputnik News US — https://t.me/sputniknewsus
Sputnik News India — https://t.me/sputniknewsindia
Table of contents
New firstOld first
02:10 GMT 08.08.2022

Islamic Jihad Threatens to Resume Attacks Against Israel if Truce Conditions Not Respected
22:47 GMT 07.08.2022
Rockets Fired at Israel After Ceasefire With Islamic Jihad Comes Into Effect - Reports
MOSCOW (Sputnik) - Multiple rockets were fired toward southern Israel right after the truce with the Palestinian Islamic Jihad went into effect on Sunday night, The Jerusalem Post reports.
The newspaper said shortly after midnight on Sunday that Islamic Jihad launched "a barrage" of rockets at Israel in the half hour before the ceasefire took effect and rockets were also fired "just minutes" after the truce came into force.
Late on Sunday night, the Israel Defense Forces (IDF) said that air raid sirens sounded in southern Israel after the ceasefire took effect.
Israeli Prime Minister Yair Lapid's press office confirmed on Sunday that the truce between Israel and Islamic Jihad was going into effect at 11:30 p.m. local time (20:30 GMT).
Lapid said earlier on Sunday that the objectives of the Breaking Dawn operation against Islamic Jihad in the Gaza Strip had been achieved.
On Friday, the IDF confirmed that a senior Islamic Jihad commander in northern Gaza, Tayseer Jabari, was killed in an Israeli airstrike that day. Another high-ranking commander, Khaled Mansour, was killed in an Israeli airstrike in the city of Rafah in the Gaza Strip on Saturday night.
The IDF launched an operation dubbed Breaking Dawn against the Palestinian movement of Islamic Jihad in the Gaza Strip on Friday.
After Jabari was killed in an Israeli strike, Ziyad Nakhalah, the leader of Islamic Jihad, threatened to retaliate by launching a missile attack on Tel Aviv.
Israel has since been repelling missile attacks and launching new attacks on the Gaza Strip.
21:06 GMT 07.08.2022
Air Raid Sirens Sound in Southern Israel After Truce Comes Into Effect - Israel's Military
TEL AVIV, (Sputnik) - Air raid sirens, warning of a possible missile attack, sounded in southern Israel after the truce with the Palestinian Islamic Jihad Movement went into effect, the press office of the Israel Defense Forces (IDF) said on Sunday.
Earlier on Sunday, the movement and Israeli Prime Minister Yair Lapid's office confirmed that the ceasefire will go into effect at 11:00 p.m. local time (20:30 GMT).
"Sirens sounded in the area adjacent to the Gaza Strip," the office said in a statement.
21:06 GMT 07.08.2022

Death Toll From Israeli Airstrikes on Gaza Strip Rises to 41 - Health Ministry
21:02 GMT 07.08.2022
Israel's Military Continues to Shell Islamic Jihad's Facilities - Press Office
TEL AVIV (Sputnik) - The Israel Defense Forces (IDF) are continuing to shell facilities of the Palestinian Islamic Jihad movement, the IDF's press office said on Sunday.
Earlier on Sunday, the movement and Israeli Prime Minister Yair Lapid's office confirmed that the ceasefire will go into effect at 11:00 p.m. local time (20:30 GMT).
"At the moment, the Israel Defense Forces are striking terrorist targets belonging to the Islamic Jihad terrorist organization," the office said in a statement.
The office added that air raid sirens continued to sound in southern Israel less than 30 minutes before the truce comes into effect.
20:24 GMT 07.08.2022
Israel reserves right to use force in case of violation of ceasefire agreement with Islamic jihad - PM's Office
20:23 GMT 07.08.2022
Israel Confirms Truce With Islamic Jihad Will Go Into Effect at 23:30
TEL AVIV (Sputnik) - Israeli Prime Minister Yair Lapid's press office confirmed on Sunday that the truce between Israel and the Palestinian Islamic Jihad movement will go into effect at 23:30 local time (20:30 GMT).
"The head of the national department of information and outreach confirms that the ceasefire will come into effect today at 23:30," the office said in a statement.
The office added that the Israeli side reserves the right to use force should the ceasefire agreement be violated.
18:59 GMT 07.08.2022
Palestinian Islamic Jihad Leader Says Ceasefire With Israel Enters Into Force at 23:30 Local Time - Reports
MOSCOW (Sputnik) - Mohammad al-Hindi, the leader of the Palestinian Islamic Jihad movement's political bureau, said on Sunday that the ceasefire in the Gaza Strip will come into effect at 11 p.m. local time (20:00 GMT).
The ceasefire will come into effect after all details are agreed upon, al-Hindi said in a televised appearance on the Al Jazeera broadcaster, adding that an Egyptian mediator will declare the truce.
Media reported earlier on Sunday that the Egypt-mediated truce between the movement and Israel was expected to enter into force at 8 p.m. local time.
18:32 GMT 07.08.2022
Israel's Defense Minister Orders Forces to Prepare for Further Hostilities, Ministry Says
Israeli Defense Minister Benny Gantz ordered the country's military to prepare for another wave of hostilities with the Islamic Jihad movement after holding a meeting with heads of security agencies of Israel, the press office of the Israeli Defense Ministry said on Sunday.
"Recently, Defense Minister Benny Gantz held an assessment of the situation with senior heads of security agencies, including the army's chief of staff, the director of the Mossad intelligence agency, the head of the Shabak [the Israel Security Agency], and others. After the meeting, Minister Gantz ordered the defense ministry to maintain combat readiness," the office said in a statement.
18:23 GMT 07.08.2022
Palestinian Islamic Jihad Confirms Gaza Truce Deal With Tel Aviv, AFP Reports
18:12 GMT 07.08.2022
Islamic Jihad Puts Forward Conditions for Truce With Israel, Movement's Member Says
The Palestinian Islamic Jihad (PIJ) movement has put forward conditions for ceasefire with Israel, including the release of Bassam al-Sadi, a regional head of the group, Anwar Abu Taha, a member of PIJ's political bureau, said on Sunday.
"We have conditions for the ceasefire. First of all, the release of Bassam al-Sadi," Taha said in a televised appearance on the Al Jazeera broadcaster.
He added that Islamic Jihad is demanding that the prosecution of the movement's members be stopped.
16:44 GMT 07.08.2022
Sirens Sound in Tel Aviv
Sirens have been heard in Tel Aviv as Sputnik correspondents report a possible missile attack on the city.

After the sirens went off, sounds of explosions were heard when the missiles were allegedly intercepted.
15:44 GMT 07.08.2022
Israeli PM Says Breaking Dawn Op Goals Reached, Final Stage Underway - Reports
Israeli Prime Minister Yair Lapid said on Sunday that the goals of the Breaking Dawn operation against Palestinian movement Islamic Jihad in the Gaza Strip have been reached.
"The goals of the operation have been achieved, we are at the final stage," Lapid was quoted by Yediot Ahronot newspaper as saying to the heads of Israel's southern cities.
14:25 GMT 07.08.2022
Number of Injured in Israeli Airstrikes on Gaza Strip Rises to 253 - Enclave's Health Ministry
The number of people wounded as a result of Israeli airstrikes on the Gaza Strip has climbed to 253, the Palestinian enclave's health ministry said on Sunday.

Earlier in the day, the ministry reported 32 deaths, adding that 215 people were wounded.

"As a result of Israeli airstrikes on the Gaza Strip... 253 people were injured," the ministry said in a statement.

The Israel Defense Forces launched an operation dubbed Breaking Dawn against the Palestinian Islamic Jihad in the Gaza Strip on Friday. The IDF press office said that the Israeli forces are preparing for the operation in Gaza to continue for one week.

Israel introduced a state of emergency and has since been repelling missile attacks while continuing to launch new attacks on the Gaza Strip. Since Friday afternoon, air raid sirens have been heard in areas bordering Gaza in Israel and some central cities of the country.

Israeli Prime Minister Yair Lapid said that the strikes against Islamic Jihad sites are meant to eliminate a concrete threat to Israelis and to inflict damage on "terrorists and their accomplices." He stressed that Israel "will continue to act without hesitation to secure peace for its citizens." One of the leaders of Islamic Jihad, Khaled al-Batsh, blamed Israel for the escalation and claimed that the group "has no choice but to defend the people against aggression."

On Saturday, the United Arab Emirates, China, France, Norway, and Ireland have submitted a request to hold a meeting of the UN Security Council to discuss the current hostilities in the Gaza Strip. The foreign ministries of Yemen, Algeria, Iraq, Jordan, Kuwait and Tunisia have condemned Israel's actions, while calling on the international community to intervene to halt the Breaking Dawn operation.
13:50 GMT 07.08.2022
WATCH: Situation From Israeli Side of Gaza Amid Reports About Possible Truce
© Ruptly
13:32 GMT 07.08.2022
Lapid Has Updated Netanyahu on Security Matters, Israeli PM's Office Says

Operation Breaking Dawn: IDF Strikes Gaza
Israel's Prime Minister Meets With Netanyahu Over Military Operation in Gaza
13:12 GMT 07.08.2022
Truce in Gaza to Come Into Force at 8 pm Local Time, Reports Say
A truce in the Gaza Strip between Israel and the Palestinian Authority will go into effect at 8 p.m. local time (17:00 GMT), Reuters reported on Sunday, citing a Palestinian official.

Earlier in the day, Reuters reported that Israel agreed to the truce in Gaza proposed by Egyptian mediators.
12:22 GMT 07.08.2022
Israel Reportedly Agrees to Proposed Truce in Gaza, Negotiators From Egypt Wait for Response From Palestinian Authority
Israel has agreed to a truce in the Gaza Strip proposed by the Egyptian mediators, while a response from the Palestinian Authority is still pending, Reuters reported on Sunday, citing sources.
10:28 GMT 07.08.2022
IDF: Almost 600 Missiles Fired at Israel From Gaza Strip During Fresh Escalation
Almost 600 missiles have been fired from the Gaza Strip at Israel since the beginning of the conflict escalation earlier this week, a spokesperson for the Israel Defense Forces (IDF) said on Sunday.

"580 missiles have already been fired. There will probably be more of them. Of these, 450 entered Israeli territory, and 20% are unsuccessful launches," the spokesperson said at a briefing.