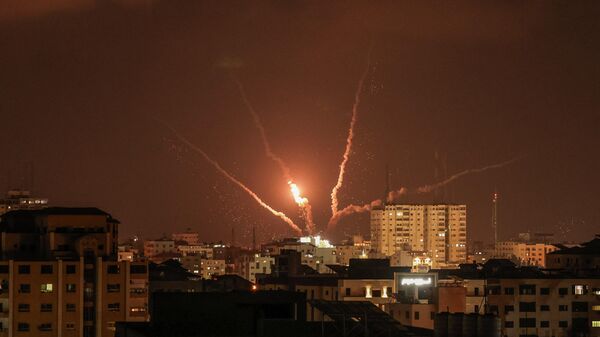 Sofia Chegodaeva
All materialsWrite to the author
Being updated
Earlier this week, Israel imposed traffic restrictions along the border with the Gaza Strip amid concerns over potential attacks from the enclave.
The Israel Defense Forces have launched Operation Breaking Dawn against the Palestinian Islamic Jihad (PIJ) terror group in Gaza.
Earlier, the IDF reported that it had started air strikes in the Gaza Strip in response to "threats posed by the Palestinian Islamic Jihad."
A special situation has been declared on the country's home front, the IDF added.

Following the direct threats posed by the Palestinian Islamic Jihad in Gaza, the IDF is currently striking in the Gaza Strip.

A special situation has been declared on the Israeli home front. Details to follow.

A photo has emerged on social media, showing a cloud of smoke rising above a residential building in downtown Gaza.

Operation Breaking Dawn: IDF Strikes Gaza
Iranian Foreign Ministry Strongly Condemns Israeli Airstrikes in Gaza Strip
20:52 GMT 05.08.2022
Over 70 Rockets Fired at Israel in 2 Hours, 9 Fell in Gaza Strip - Israeli Army
More than 70 rockets were fired at Israeli territory in two hours, 9 of them fell in the Gaza Strip, the Israel Defense Forces said.
"In just 2 hours tonight: 71 rockets were fired from Gaza toward Israel. 9 of these rockets fell INSIDE the Gaza Strip. Terrorist rockets threaten innocent civilians—both Israeli and Gazan," the IDF said on Twitter.
Earlier, the army said that air raid sirens sounded in the south and in the center of the country, including in cities of Ashkelon and Ashdod.
18:51 GMT 05.08.2022
PM Lapid: Israel Not Interested in Large-Scale Operation in Gaza, But Not Afraid of It
TEL AVIV (Sputnik) - Israel is not interested in a large-scale operation in the Gaza Strip, but is not afraid of it, Israeli Prime Minister Yair Lapid said in a televised address broadcast live by Israeli TV channels.
"Today's actions in Gaza began in the light of specific threats that have disrupted the usual way of life in the south. Israel is not interested in a large-scale operation in Gaza, but it is not afraid of it either," the prime minister said.
During the prime minister's speech, air raid sirens sounded in the central and southern regions of Israel.
18:40 GMT 05.08.2022
IDF Says Over 70 Rockets Launched at Israel From Gaza, No Casualties or Serious Damage
18:34 GMT 05.08.2022
Islamic Jihad Says It Has Launched Some 100 Rockets Into Israel Over Half an Hour
18:24 GMT 05.08.2022
IDF Responds to Rocket Attacks From Gaza
18:06 GMT 05.08.2022
Red Alert: Rocket Sirens Sound in Israeli Cities

Videos showing rockets launched from the Gaza Strip towards Israel have been shared by local media:
17:49 GMT 05.08.2022
IDF Spokesman Says 'We're in the Midst of Targeted Campaign' Against PIJ
17:48 GMT 05.08.2022
Qatar Condemns 'Israeli Aggression' in Gaza
17:47 GMT 05.08.2022
White House: Israel Has Right to Protect Itself
“We are monitoring developments in Gaza. We urge all sides for calm. We firmly believe that Israel has the right to protect itself,” a spokesperson for the White House National Security Council said.
17:07 GMT 05.08.2022
Israeli Media: Rocket Fired From Gaza Strip Towards Israel Fails to Reach Target, Lands in Enclave
17:06 GMT 05.08.2022
Palestinian Health Ministry Raises Death Toll From IDF Strikes to 10
17:01 GMT 05.08.2022
WATCH: IDF Destroys PIJ's Rocket Launch Site in Khan Yunis
Newsfeed
0
Access to the chat has been blocked for violating the rules . You will be able to participate again through:∞. If you do not agree with the blocking, please use the feedback form
The discussion is closed. You can participate in the discussion within 24 hours after the publication of the article.
To participate in the discussion
log in or register
loader
Chats
Заголовок открываемого материала