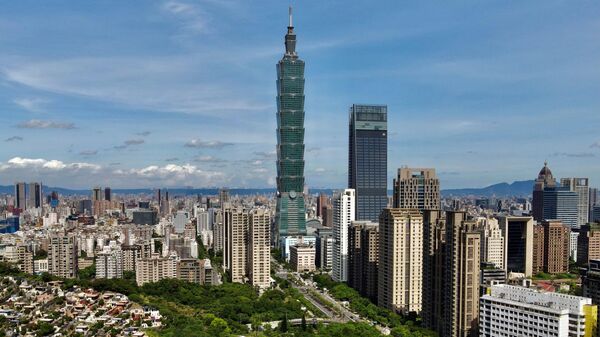 Beijing previously slammed the alleged plans of the American delegation to visit Taiwan, since China considers it a brazen interference into its internal affairs.
US House Speaker Nancy Pelosi is in Malaysia on Tuesday, having arrived after visiting Singapore as part of her Asian trip. The American lawmaker is expected to meet Prime Minister Ismail Sabri Yaakob and her counterpart in the Malaysian legislature Azhar Azizan Harun, local news agency Bernama reported.
Reports suggest that after visiting Malaysia, the delegation led by Pelosi, which includes six congressmen, will travel to Taipei later in the day. During the visit, she is expected to meet with the island's leadership, including president Tsai Ing-wen.
The White House noted that she has right to go to Taiwan, but also noted that the speaker neither confirmed nor denied the possibility of the trip.
Addressing the issue, China's People's Liberation Army started military exercises on Saturday in the southeastern province of Fujian across the strait from the island, closing the designated maritime area. At the same time, reports say that an American aircraft carrier group led by the USS Ronald Reagan is heading in the direction of Taiwan.
Beijing has repeatedly stated that the trip would infringe the one-China principle and jeopardize US-China bilateral relations. China stressed it is ready to defend its state sovereignty and territorial integrity, warning Washington about dire consequences if Pelosi's visit to Taiwan takes place.
Table of contents
New firstOld first
11:02 GMT 03.08.2022
Taiwan Warns Vessels to Avoid Zones of Chinese Military Drills on August 4-7, State Media Say
Taiwan's Maritime and Port Bureau instructed vessels to detour the areas of Chinese military drills off the coast of the island and find alternative routes for entering and leaving the ports, Taiwanese government-controlled media reported on Wednesday.
According to the Central News Agency, Taiwan's port authority said that the Chinese military was scheduled to begin exercises at 12 p.m. (04:00 GMT) on Thursday and would carry on until 12 p.m. of Sunday. The authority warned of the obstructions to the navigation, suggesting alternative routes to and from the ports in the cities of Keelung, Taipei, Kaohsiung and others.
11:00 GMT 03.08.2022

"The One China principle is the general consensus of the international community and the basic norm of international relations. The SCO adheres to the principle of One China and strongly opposes any interference of external forces in the internal affairs of member countries", SCO Secretary General Zhang Ming said, as quoted by the SCO Secretariat.

06:54 GMT 03.08.2022
Beijing Urges Asian Airlines to Avoid Flights Near Taiwan
06:44 GMT 03.08.2022
Beijing Urges Asian Airlines to Avoid Flights Near Taiwan
06:38 GMT 03.08.2022
Washington Remains Committed to Supporting Taiwan - Pelosi
MOSCOW (Sputnik) - The United States are proud of a strong friendship between Washington and Taiwan and will not give up on its commitment to support the island, US House Speaker Nancy Pelosi said on Wednesday.
"Today our delegation, which I’m very proud, came to Taiwan to make it unequivocally clear: we will not abandon our commitment to Taiwan and we are proud of our enduring friendship," Pelosi said during a joint press conference with Taiwanese President Tsai Ing-wen.
On Wednesday, during a joint press conference with Vice President of Taiwanese parliament Tsai Chi-Chang, Pelosi also expressed the desire to increase dialogue and cooperation between that parliaments of the two countries.
"We want to increase interparliamentarian cooperation and dialogue and we do so at the time when our president has put forward the Asian-Pacific initiative, which we support," Pelosi added.
US President Joe Biden launched the new Indo-Pacific Economic Framework for Prosperity (IPEF) together with 12 Indo-Pacific countries, namely Australia, Brunei, India, Indonesia, Japan, Republic of Korea, Malaysia, New Zealand, the Philippines, Singapore, Thailand, and Vietnam, in late May in Tokyo. The initiative is aimed at increasing cooperation between the Indo-Pacific nations and delivering concrete benefits for the people of the region.
Pelosi arrived in Taiwan on Tuesday as part of a congressional delegation's tour of the Indo-Pacific region, casting aside private warnings from the Biden administration about the risk that her high-profile diplomatic visit could bring and drawing a sharp response from the Chinese government. In particular, Beijing began military drills in the northern, southwestern and southeastern waters off the coast of Taiwan.
China claims sovereignty over the self-governed island and has repeatedly warned against any contacts between Taiwanese officials and political leaders from other nations, the United States in particular.
05:27 GMT 03.08.2022
China Suspends Citrus Fruit and Fish Imports From Taiwan Amid Pelosi Visit
Beijing has moved to suspend the import of citrus fruit from Taiwan due to detection of excessive pesticide residue, and the import of fish over positive Vovid tests on packages. China has also decided to suspend "the export of natural sand to Taiwan" as of Wednesday.
The new curbs comes amid US House Speaker Nancy Pelosi’s visit to Taiwan. The politician is the most senior American official to have visited the island in two decades and is the second in the US presidential line of succession after the vice president.
04:33 GMT 03.08.2022
Japan Closely Monitors Situation in Region Amid Pelosi's Visit to Taiwan - Reports
TOKYO (Sputnik) - The Japanese government is closely monitoring the security situation amid US House Speaker Nancy Pelosi's controversial visit to Taiwan and China's military exercises, the Kyodo news agency reported citing a senior Japanese Foreign Ministry source.

The source said the peace and stability of the Taiwan Strait are very important for the security of Japan and the entire world.

Pelosi, despite strong protests from Beijing, landed at the Taipei airport on Tuesday. The US administration, warned by Chinese President Xi Jinping, assured Beijing of its commitment to the One China policy, and distanced itself from the visit, saying that Pelosi makes her own decisions.

China, in response to Pelosi's visit, began military drills in the northern, southwestern and southeastern waters off the coast of Taiwan.

The US military has deployed its warships, including USS Ronald Reagan, in the South China Sea.

China has always been against any contacts between Taiwan representatives and other countries' high-ranking officials or military leaders.
04:32 GMT 03.08.2022
Taiwan's Defense Ministry Accuses China of Defying Int'l Order With Maritime Drills
"Some of the areas of China's drills breach into... (Taiwan's) territorial waters," defence ministry spokesman Sun Li-fang said at a press conference. "This is an irrational move to challenge the international order."
03:54 GMT 03.08.2022

US-China Tensions Over Taiwan
In Taiwan, Pelosi Claims She Brings 'Peace to Region' While Pledging 'Unwavering Support' to Island
02:57 GMT 03.08.2022
Pelosi: US Delegation Came to Taiwan to Make Clear We Will Not Abandon Promises to Taiwan
Moments after officially meeting with Taiwanese President Tsai Ing Wen, US House Speaker Nancy Pelosi offered praises for Tsai’s leadership, and for being the island nation’s first female president before underscoring the US Congress’ support for Taiwan.
“[The US delegation] came to Taiwan to make unequivocally clear that we will not abandon our commitment to Taiwan and we’re proud of our enduring friendship,” Pelosi remarked during a brief speech, noting how the Taiwan Relations Act serves as the foundation to maintain US-Taiwan relations.
The California Democrat went on to describe Taiwan as an “island of resilience” before stating she also came to to Taipei to learn and participate in Asia Pacific affairs so to create more possibilities for Taiwan.
02:38 GMT 03.08.2022
Pelosi Meets Taiwanese President Tsai Ing Wen 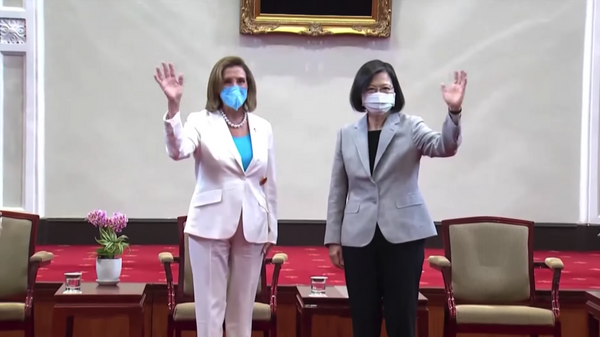 Beijing to Hold US Responsible for Any Eventualities Over Taiwan Issue - Foreign Ministry
02:16 GMT 03.08.2022
Taiwan Defense Ministry: China's Live-Fire Exercises Suggest Officials Seek to Solve Issues Through Force - Not Peacefully
01:35 GMT 03.08.2022
China to Impose Sanctions Against Two Foundations in Taiwan for Separatism - Authorities
China has decided to impose sanctions on two Taiwanese foundations for separatist activities, and mainland Chinese companies are prohibited from cooperating with businesses that have donated to the foundations, Ma Xiaoguang, spokesman for the State Council's Taiwan Affairs Office, said.

"Under the guise of democracy and joint development, the Taiwan Foundation for Democracy and the International Cooperation and Development Fund, organizations affiliated with the 'Taiwan independence' supporters, are actively involved in separatist activities to achieve Taiwan independence on the international stage, trying their best to get closer to external anti-Chinese forces, attack and vilify mainland China," Ma said.

"Mainland China has decided to impose disciplinary measures against the above-mentioned foundations and ban them from cooperating with Mainland Chinese organizations, enterprises and individuals," he said.
00:48 GMT 03.08.2022

"We will try our best to unite our country in a peaceful way. The reason why we do not give up the option of a military solution is because we need to deter those potential separatists and so that they will not go too fast," he said on Tuesday on the margins of the 10th Review Conference on the Treaty on Non-Proliferation of Nuclear Weapons (NPT) at the United Nations.
Fu added that Beijing believes "there may be more conflicts" in the near future on account of the "world situation" being "quite tense."
22:20 GMT 02.08.2022

US-China Tensions Over Taiwan
Ex-Pentagon Adviser: US Provoking China Needlessly Over Taiwan, Like Russia Over Ukraine
Newsfeed
0
Access to the chat has been blocked for violating the rules . You will be able to participate again through:∞. If you do not agree with the blocking, please use the feedback form
The discussion is closed. You can participate in the discussion within 24 hours after the publication of the article.
To participate in the discussion
log in or register
loader
Chats
Заголовок открываемого материала